CHICAGO — Little is known about the origins of manikins—small anatomical sculptures thought to be used by doctors four centuries ago—but now advanced imaging techniques have offered a revealing glimpse inside these captivating ivory dolls. Researchers using micro-CT successfully identified the material composition and components of several ancient ivory manikins, according to a new study being presented next week at the annual meeting of the Radiological Society of North America (RSNA). 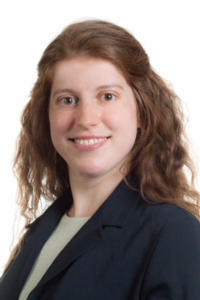 Ivory manikins are typically thought to have been carved in Germany in the late 17th century. They are reclining human figurines, 4-8 inches long, generally female, which open to reveal removable organs and sometimes a fetus attached with a fabric "umbilical" cord. The manikins have intricately carved features, and some even have pillows beneath their heads. It is believed that they were used for the study of medical anatomy or perhaps as a teaching aid for pregnancy and childbirth. By the 18th century, they had been replaced by more realistic teaching tools, such as wax models and cadavers. The manikins then became objects of curiosity and luxury status symbols in private collections.

Duke University in Durham, N.C., holds the world's largest collection of manikins (22 out of 180 known manikins worldwide). Most of the manikins in the Duke collection were purchased in the 1930s and 1940s by Duke thoracic surgeon Josiah Trent, M.D., and his wife Mary Duke Biddle Trent, prior to the 1989 ivory trade ban. The researchers noted that after being donated to the university by Trent's granddaughters, the manikins have spent most of their time in archival storage boxes or behind display glass, as they are too fragile for regular handling.

"They are usually stored in a library vault and occasionally rotated into a special display unit in the Duke Medical Library for visitors to appreciate," said Fides R. Schwartz, M.D., research fellow in the Department of Radiology at Duke.

Non-destructive imaging with X-rays and CT has been used in the past to examine fragile artwork and ancient artifacts. Imaging of relics has been extremely beneficial to the fields of archaeology and paleopathology—the study of ancient diseases.

Micro-CT is an imaging technique with greatly increased resolution, compared to standard CT. It not only allows visualization of internal features, it noninvasively provides volumetric information about an object's microstructure.

Dr. Schwartz and colleagues hoped that through micro-CT imaging they could determine the ivory type used in the Duke manikins, discover any repairs or alterations that were not visible to the naked eye, and allow a more precise estimation of their age.

"The advantage of micro-CT in the evaluation of these manikins enables us to analyze the microstructure of the material used," she said. "Specifically, it allows us to distinguish between 'true' ivory obtained from elephants or mammoths and 'imitation' ivory, such as deer antler or whale bone."

The research team scanned all 22 manikins with micro-CT and found that 20 out of the 22 manikins were composed of true ivory alone, though materials like antler might have been less expensive in that time. They discovered that one manikin was made entirely of antler bone, and one manikin contained both ivory and whale bone components.

Metallic components were found in four of the manikins, and fibers in two. Twelve manikins contained hinging mechanisms or internal repairs with ivory pins, and one manikin contained a long detachable pin disguised as a hairpiece.

The most established trade routes in the 17th and 18th centuries sourced ivory from Africa, leading the researchers to believe that since nearly all of the manikins were made from true ivory, it is likely that the ivory obtained to craft the manikins was acquired from the African region.

"This may assist in further narrowing down the most probable production period for the manikins," Dr. Schwartz said. "Once historical trade routes are more thoroughly understood, it might become clear that the German region of origin had access to elephant ivory only for a limited time during the 17th and 18th century, for example, from 1650 to 1700 A.D."

Additionally, identifying non-ivory components in the manikins may provide more accessibility to carbon dating, allowing the researchers to more accurately estimate the age of some of the manikins without damage to the fragile pieces.

"This is potentially valuable to scientific, historic and artistic communities, as it would allow display and further study of these objects while protecting the fragile originals," Dr. Schwartz said. "Digitizing and 3D printing them will give visitors more access and opportunity to interact with the manikins and may also allow investigators to learn more about their history." 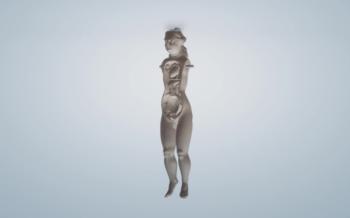 Video 1. 3D reconstruction of manikin from CT scan data.
Download MP4
(Right-click and Save As) 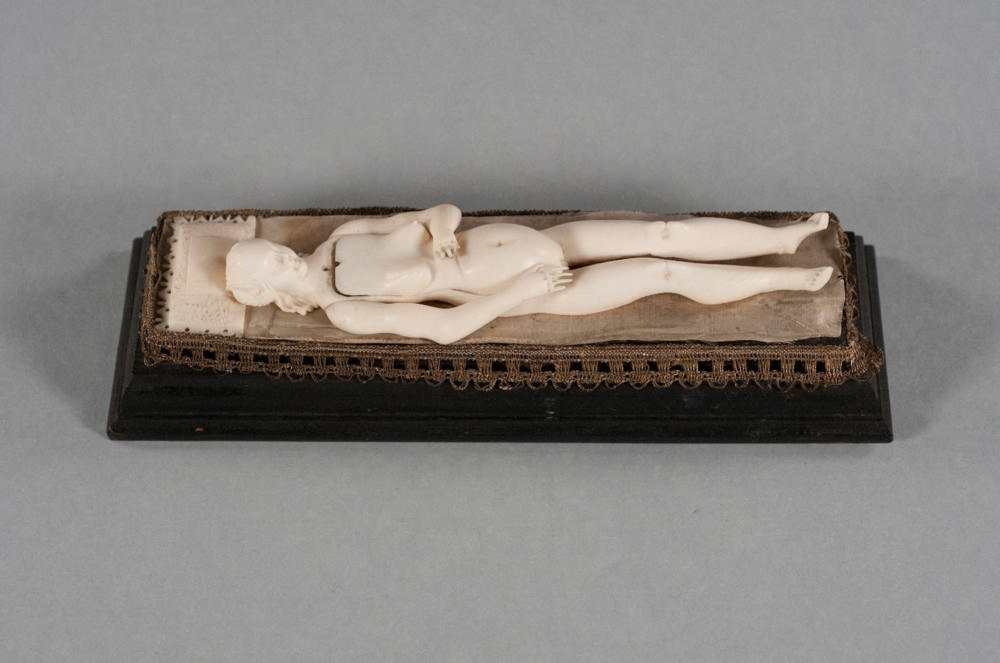 Figure 1. An ivory figurine reclining on its "bed" with all organs placed inside.
High-res (TIF) version
(Right-click and Save As) 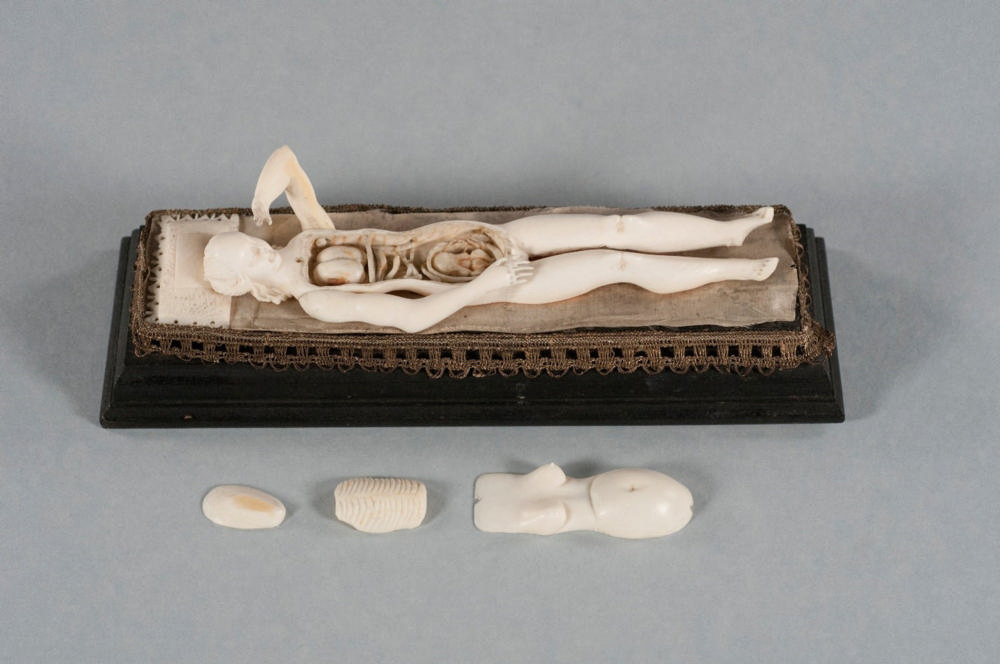 Figure 2. An Ivory manikin after removal of the abdominal and chest wall, ribs, and part of the uterus. Internal organs such as the lungs, intestines, as well as a fetus inside the uterus are visible.
High-res (TIF) version
(Right-click and Save As)

Figure 3. Micro-CT initial scan data. The internal organs and fetus inside the uterus are visible, similar to a photograph.
High-res (TIF) version
(Right-click and Save As) 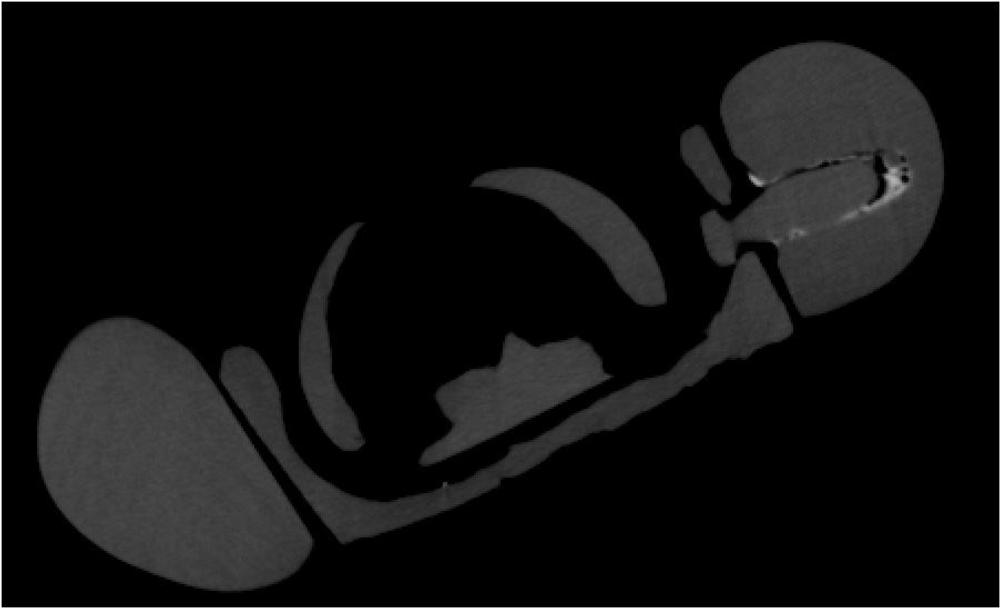 Figure 4. Micro-CT cross section of the manikin at shoulder level, showing one of the arm hinges held in place with higher density ("whiter") material, likely a form of glue.
High-res (TIF) version
(Right-click and Save As) 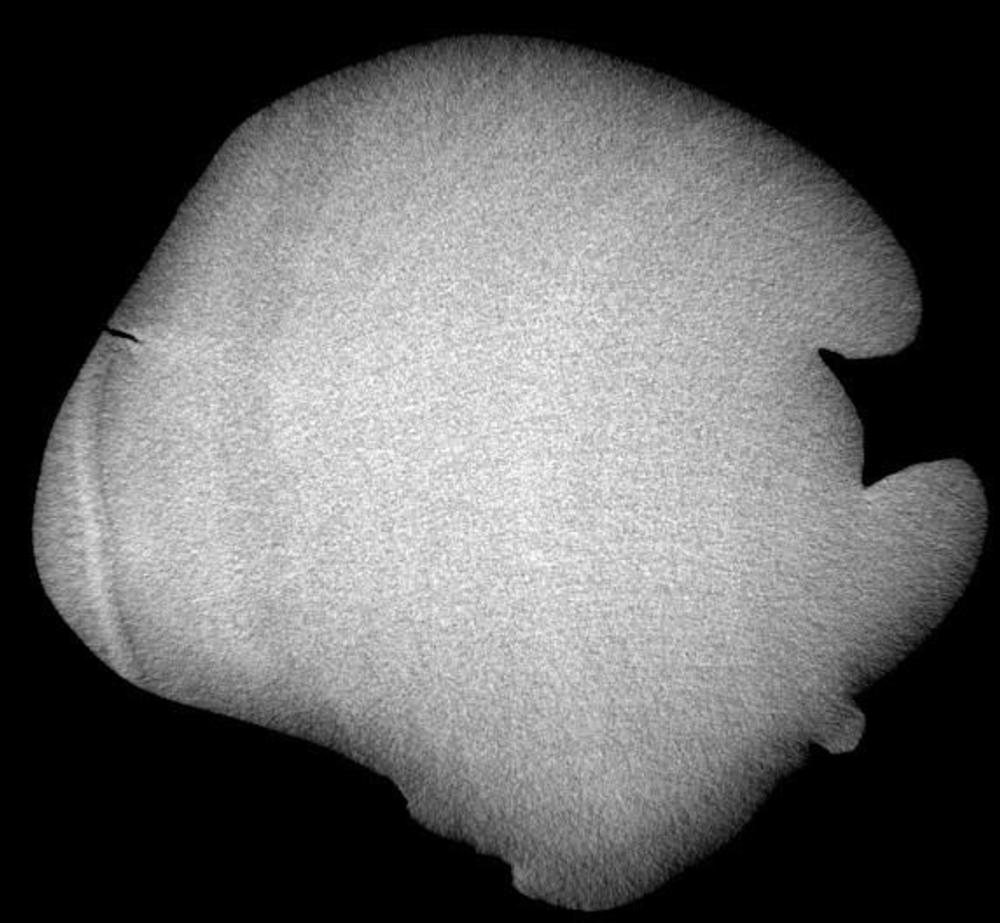 Figure 5. Micro-CT cross-sectional image of a manikin made of authentic ivory.
High-res (TIF) version
(Right-click and Save As) 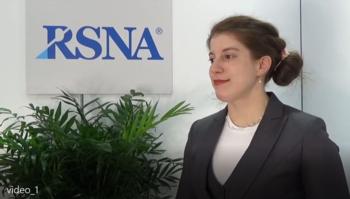