OAK BROOK, Ill. — Anxiety is associated with an increased rate of progression from mild cognitive impairment to Alzheimer’s disease, according to a study being presented at the annual meeting of the Radiological Society of North America (RSNA). 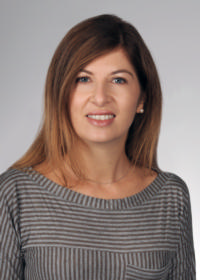 Alzheimer’s disease represents a major public health crisis worldwide. The number of deaths from the disease has more than doubled since 2000, and it is currently the fifth-leading cause of death among individuals over 65 in the U.S.

“We know that volume loss in certain areas of the brain is a factor that predicts progression to Alzheimer’s disease,” said study senior author Maria Vittoria Spampinato, M.D., professor of radiology at the Medical University of South Carolina (MUSC) in Charleston. “In this study, we wanted to see if anxiety had an effect on brain structure, or if the effect of anxiety was independent from brain structure in favoring the progression of disease.”

The study group included 339 patients, average age of 72 years, from the Alzheimer’s Disease Neuroimaging Initiative 2 cohort. Each person had a baseline diagnosis of mild cognitive impairment; 72 progressed to Alzheimer’s disease while 267 remained stable.

The researchers obtained brain MRIs to determine the baseline volumes of the hippocampus and the entorhinal cortex, two areas important to forming memories. They also tested for the presence of the ApoE4 allele, the most prevalent genetic risk factor for Alzheimer’s disease. Anxiety was measured with established clinical surveys.

As expected, patients who progressed to Alzheimer’s disease had significantly lower volumes in the hippocampus and the entorhinal cortex and greater frequency of the ApoE4 allele. Most notably though, the researchers found that anxiety was independently associated with cognitive decline. 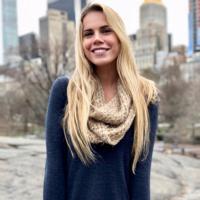 The link between anxiety symptoms and a faster progression to Alzheimer’s disease presents an opportunity for improving the screening and management of patients with early mild cognitive impairment, the researchers said.

“We need to better understand the association between anxiety disorders and cognitive decline,” Dr. Spampinato said. “We don’t know yet if the anxiety is a symptom—in other words, their memory is getting worse and they become anxious—or if anxiety contributes to cognitive decline. If we were able in the future to find that anxiety is actually causing progression, then we should more aggressively screen for anxiety disorders in the elderly.”

“The geriatric population is routinely screened for depression in many hospitals, but perhaps this vulnerable population should also be assessed for anxiety disorders,” Ulber added. “Middle-aged and elderly individuals with high level of anxiety may benefit from intervention, whether it be pharmacological or cognitive behavioral therapy, with the goal of slowing cognitive decline.”

The study was based on MRI scans done at one point in time. For future research, the team would like to study MRIs obtained after the initial scan to better understand the connection between anxiety and brain structure.

“We’re now interested in looking at changes over time to see if anxiety has an effect one way or the other on how fast the brain damage progresses,” Dr. Spampinato said. “We will also take a closer look at gender differences in the association between anxiety and cognitive decline.” 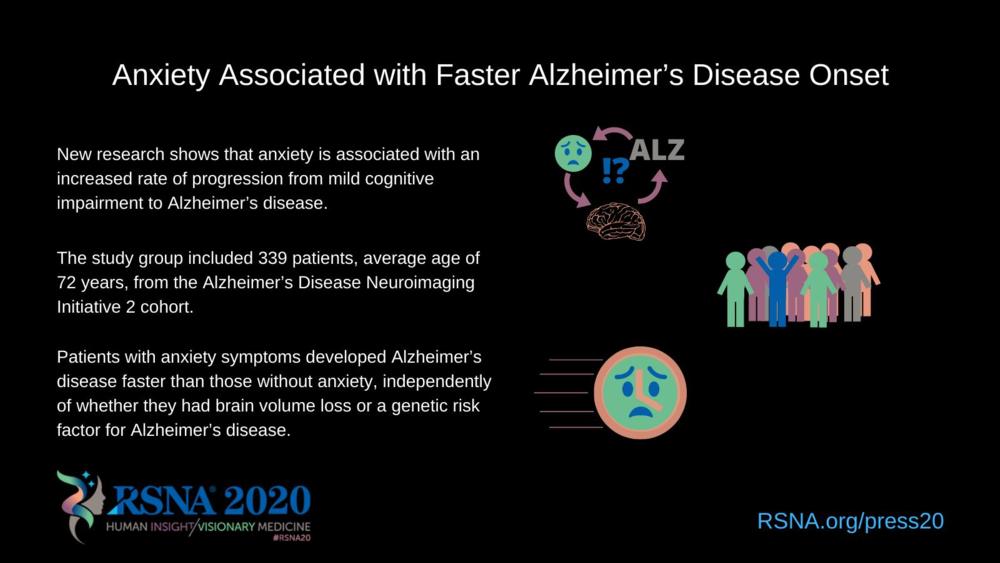 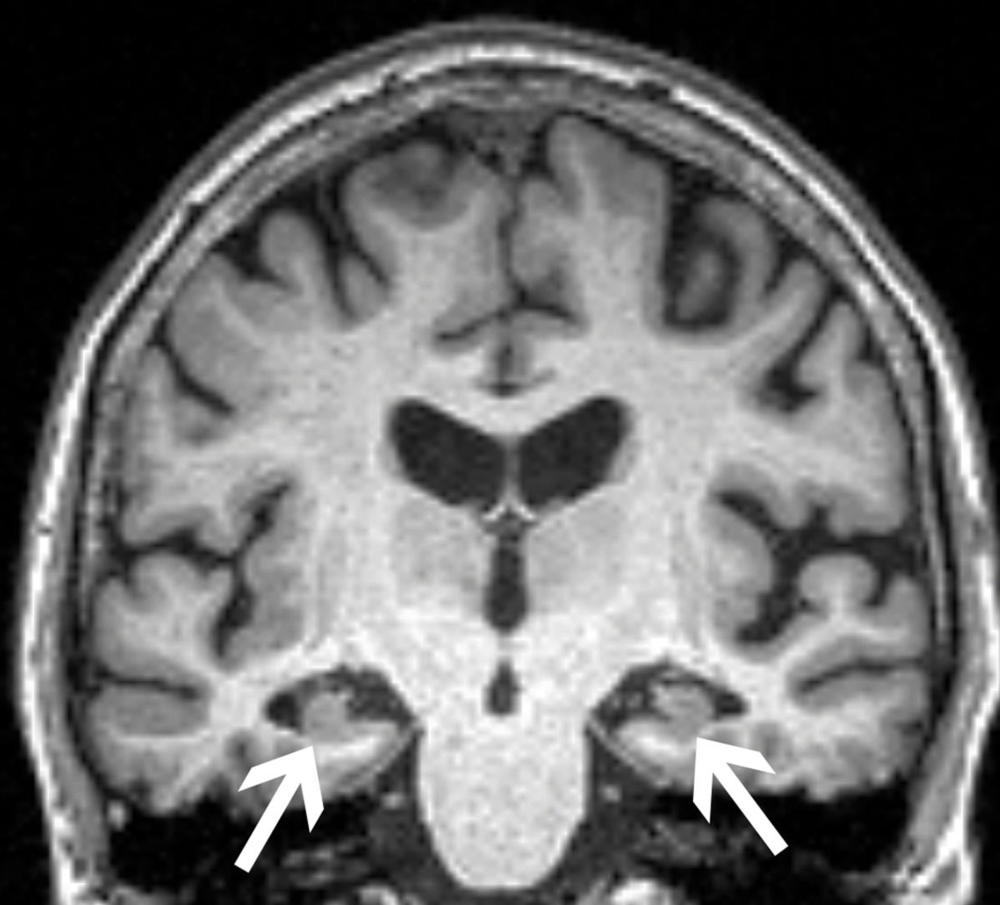 Figure 1. Brain MRI of a 72-year-old woman shows loss of volume of the hippocampus (arrows). The patient had all three characteristics, volume loss of the hippocampi, APOE4, and anxiety, found in the study to be associated with progression from mild cognitive impairment to dementia.
High-res (TIF) version
(Right-click and Save As) 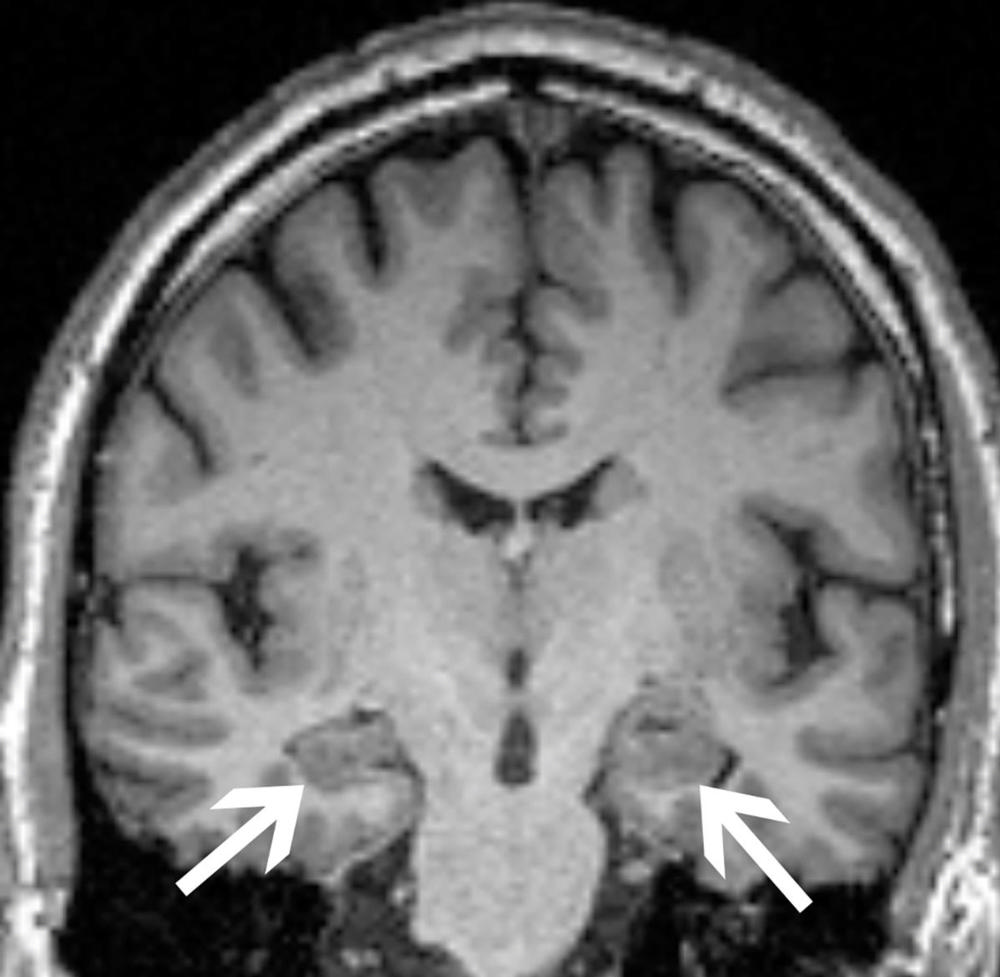 Figure 2. Brain MRI of a 62-year-old man with mild cognitive impairment. His condition remained stable over the course of the study. His brain MRI demonstrates hippocampi of normal size (arrows). He was not a carrier of APOE4 and did not have an anxiety disorder.
High-res (TIF) version
(Right-click and Save As) 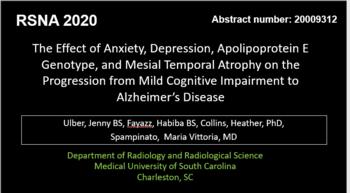