James P. Borgstede, M.D., Named President of the RSNA Board

CHICAGO — James P. Borgstede, M.D., was named president of the Radiological Society of North America (RSNA) Board of Directors today at the Society's annual meeting in Chicago. 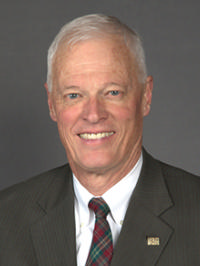 As president of the RSNA board, Dr. Borgstede will support RSNA's commitment to promoting innovative educational opportunities and the advancement of radiologic technologies.

"The RSNA is a worldwide leader in radiology clinical practice innovation, research and education," Dr. Borgstede said. "We are members of a specialty with amazing and unparalleled opportunities for scientific advancement. As an RSNA leader, my goals include advancing the appropriate development and use of radiologic technologies, particularly in relation to artificial intelligence, and assisting with education and radiology development in under-resourced areas of the world. I am honored to have the opportunity to serve our patients, our specialty and the RSNA."

Over the years, Dr. Borgstede has been very involved with the RSNA annual meeting. Recognized in 2019 as an Honored Educator, he has delivered scientific presentations and refresher courses, participated in symposiums, and was co-presenter in 2005 of a special focus session, "The Diffusion of Imaging and Peril of Inappropriate Utilization." At RSNA 2007, Dr. Borgstede lectured during the Opening Plenary Session. He has had dozens of articles published and has lectured at more than 120 scientific and educational meetings worldwide.

Dr. Borgstede has held committee or leadership positions in a number of organizations, including the Colorado Radiological Society (CRS), El Paso County Medical Society, Rocky Mountain Radiological Society and the Society of Radiologists in Ultrasound. He was president of the International Society of Radiology from 2014 to 2016. He was chairman of the Board of Chancellors at the American College of Radiology (ACR) from 2004 through 2006 and president from 2006 through 2007. Since his presidency at ACR, he has continued on various ACR committees, including the Committee on International Service, with which he traveled multiple times to Grace Children's Hospital Port-au-Prince, where he worked as part of the Haiti Radiology Project.

The recipient of numerous honors and awards throughout his career, Dr. Borgstede has received the gold medal and the William T. Thorwarth Award for Excellence in Economics and Health Policy from ACR. He received service awards from CRS and was the first CRS gold medalist. He is a recipient of the University of Colorado Hospital President's Award for Leadership, and in 2019 he was awarded a Presidential Citation for Meritorious Service, recognizing his outstanding contributions to organizational performance improvement, patient safety and clinical outcomes at the hospital. In 2015, Dr. Borgstede was included in the "Denver Best Doctors 2015-2016" list by the Denver Business Journal. He has been selected for inclusion in Best Doctors in America from 2001 to 2006, 2009 to 2012, and 2016 to 2018.