OAK BROOK, Ill. — Women may have a more difficult time than men in recovering from concussion, according to a new study published online in the journal Radiology.

In most cases, patients who experience MTBI will recover fully, typically within three months. Ten to 15 percent of MTBI patients will continue to experience persistent disabling problems beyond three months, which can include post-traumatic headache, sleep disturbance, loss of balance, memory and other cognitive impairments, fatigue, and mood or affective disorders. 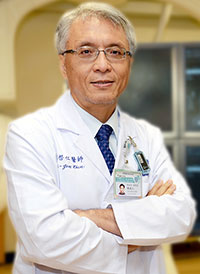 "In clinical practice, more women than men seek medical attention due to persistent symptoms after MTBI at a ratio of almost 2:1," said the study's lead author, Chi-Jen Chen, M.D., from the Department of Diagnostic Radiology and Brain and Consciousness Research Center at Taipei Medical University Shuang-Ho Hospital and superintendent at Chia-Yi Hospital in Taiwan. "We started to wonder whether there might be differences in MTBI outcomes between men and women."

The researchers studied 30 patients with MTBI and 30 control patients. Both groups contained an equal number of men and women. Patients underwent an fMRI exam within one month after injury and a follow-up fMRI exam at six weeks after first scan. All participants underwent neuropsychological tests, including digit span and continuous performance test (CPT). Digit span is a short-term memory test measuring how many numbers a participant can remember in sequence. CPT measures a person's sustained and selective attention and impulsivity.

Neuropsychological results showed that among the women, the total digit span score was lower in the MTBI group, compared to the control group.

"These findings provide evidence that female gender may be a risk factor for working memory impairment after MTBI," Dr. Chen said. "If so, more aggressive management should be initiated once MTBI is diagnosed in female patients."

Because fMRI has the potential to detect working memory impairment, predict outcome and monitor treatment effect, incorporation of fMRI into treatment protocol for MTBI may be advisable in the future, according to Dr. Chen. However, he cautions that further study needs to be done to validate these preliminary findings.

For patient-friendly information on fMRI of the brain, visit RadiologyInfo.org. 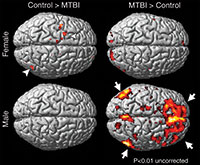