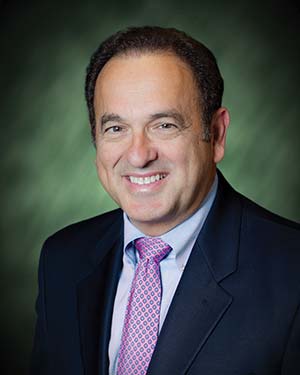 CHICAGO, Ill. — Bruce G. Haffty, M.D., an international expert in breast radiation oncology known for his accomplishments in the clinic and classroom, as well as for his groundbreaking cancer research, is the newest member of the Radiological Society of North America (RSNA) Board of Directors. Dr. Haffty will assume the position of Board Liaison for Science, as Richard L. Ehman, M.D., becomes chairman of the Board of Directors.

"RSNA provides the preeminent forum to advance the radiologic sciences through its meeting, journals and education, all supported by its dedicated volunteers," Dr. Haffty said. "By providing venues to present findings and exchange ideas, as well as offering funding opportunities through its foundation, there is no other organization better positioned to shape the future of radiology than RSNA."

Dr. Haffty completed his medical school and residency training at Yale University School of Medicine in 1988 and spent the next 18 years specializing in breast and head and neck cancers in Yale's Department of Therapeutic Radiology. Dr. Haffty served on the faculty at Yale from 1988 through 2005. He was promoted to professor of therapeutic radiology in 2000, and served as residency program director from 1992 through 2004 and vice chairman and clinical director from 2002 to 2005.

At Rutgers Robert Wood Johnson Medical School and Cancer Institute of New Jersey, Dr. Haffty spearheaded the expansion of the Radiation Oncology Program and developed a residency program in radiation oncology and medical physics—the only such programs in the state of New Jersey.

Through his extensive work with the American Society for Radiation Oncology (ASTRO), Dr. Haffty served as the founding president of the Association of Directors of Radiation Oncology Programs (ADROP) in 2000, providing tools and resources to advance the quality of residency training and education in radiation oncology. He served as ADROP president from 2000 to 2003.

Dr. Haffty's research has focused on developing novel methods of delivering radiation therapy targeting breast cancer and exploring novel molecular targets that may enhance the effects of radiation. In a recent project, Dr. Haffty and colleagues demonstrated that combining radiation with BCL-2 inhibitors results in better response rates than with radiation alone and discovered molecular pathways of resistance to the combination of BCL-2 inhibitors and radiation. During the course of this research, one of Dr. Haffty's medical students was awarded a grant from the RSNA Research & Education (R&E) Foundation to work on a portion of the project.

Dr. Haffty said he has watched how R&E-funded pilot projects in his department have inspired students and junior faculty to further their academic careers. RSNA also advances radiologic science, he said, through innovative programs like the Bolstering Oncoradiologic and Oncoradiotherapeutic Skills for Tomorrow (BOOST) program, designed to forge ties between radiology and radiation oncology, and special collaborations such as the Quantitative Imaging Biomarker Alliance.

"By facilitating these forums to exchange ideas and provide education, RSNA will continue to help to support the future of the field," Dr. Haffty said.

In addition to editing the comprehensive Handbook of Radiation Oncology, Dr. Haffty served as co-editor of The Cancer Journal from 2005 to 2007 and is currently associate editor of the Journal of Clinical Oncology, a position he has held since 2007. He has served on the RSNA News Editorial Board since 2009.

Dr. Haffty has volunteered with RSNA in a number of roles, including as third vice president from 2013 to 2014 and as co-chair of the BOOST program. At RSNA 2009, he delivered the Annual Oration in Radiation Oncology, "Genetic Factors in the Diagnostic Imaging and Radiotherapeutic Management of Breast Cancer." Dr. Haffty was named RSNA Outstanding Educator in 2013.

Among his other leadership positions, Dr. Haffty served as president of ASTRO (2013 to 2014), the American Board of Radiology (2010 to 2012) and the American Radium Society (2008 to 2009). He served as chairman of the Accreditation Council for Graduate Medical Education Residency Review Committee, Radiation Oncology, from 2007 to 2010.