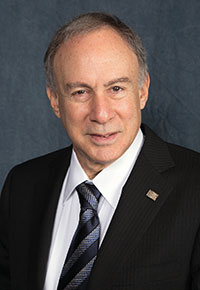 CHICAGO — Ronald L. Arenson, M.D., FACR, was named president of the Radiological Society of North America (RSNA) Board of Directors today at the Society's annual meeting in Chicago.

Dr. Arenson is the Alexander R. Margulis Distinguished Professor and chair of the Department of Radiology and Biomedical Imaging at the University of California, San Francisco, where he has been since 1992.

As RSNA president, Dr. Arenson will focus on the importance of patient-centered care and radiology's evolution from volume- to value-based practice.

"As the healthcare industry grows increasingly complex and patients become more involved in every stage of their medical care, radiology must adapt to embrace value-based practice and the patient-centered care model. As president, I hope to continue to advance these initiatives and encourage the development and use of informatics tools to improve the care we provide to our patients," he said.

Dr. Arenson earned his medical degree in 1970 from New York Medical College in New York. He completed his internship at Beth Israel Medical Center in New York and his diagnostic radiology residency at Massachusetts General Hospital in Boston.

Dr. Arenson began his academic career in 1976 at the University of Pennsylvania (Penn) after serving in the U.S. Navy at the National Naval Medical Center in Bethesda, Md. During his tenure at Penn, Dr. Arenson was associate chairman of clinical services in radiology, director of administrative services and interim vice provost for information systems and computing for the campus.

Dr. Arenson has authored or co-authored over 110 peer-reviewed scientific articles, four book chapters, three books and numerous exhibits, audiovisuals, abstracts and editorials. He has served on the editorial boards of several journals, including Radiology, Investigative Radiology, Journal of Digital Imaging, Academic Radiology and Journal of the American College of Radiology. Dr. Arenson has been an invited lecturer nationally and internationally at nearly 250 universities and institutes.

During his career, Dr. Arenson has been an active member of several medical societies and organizations, including the American College of Medical Informatics (ACMI), Association of University Radiologists (AUR), Society of Chairmen in Academic Radiology Departments (SCARD), the Academy of Radiology Research (ARR) and the American College of Radiology (ACR), where he has served on several committees. He was a founding member of the Radiology Information System Consortium (RISC), now the Society for Imaging Informatics in Medicine (SIIM). Dr. Arenson holds fellowships in the ACR, ACMI and SIIM. He is past-president of the AUR, SCARD and ARR, and served on the National Advisory Council of the National Institute of Biomedical Imaging and Bioengineering of the National Institutes of Health (NIH), as well as the NIH Council of Councils.

Throughout his career, Dr. Arenson has received many honors. He received the Alumni Medal of Honor from New York Medical College in 2001 and received a gold medal from AUR in 2013. He has been the keynote speaker at many events, including RSNA 2007 and the American Board of Radiology Foundation Summit.

Dr. Arenson's research achievements include the development of a catheter that can be steered in a magnetic field, allowing interventional radiologists to reach further into smaller blood vessels. Dr. Arenson and fellow researchers filed a patent on the invention in 2001. The patent was recently nominated for a national fair on technology, and Dr. Arenson is now working with faculty on the next-stage prototype.

A member of RSNA since 1974, Dr. Arenson has served on numerous committees, including the Publications Council, Education Council, Public Information Advisors Network, Research Development Committee and the Radiology Informatics Committee (formerly Electronic Communications Committee), of which he served as chairman from 1999 to 2005. In 2007, he was elected to the RSNA Board of Directors and has served as the Board liaison for the annual meeting and technology. He served as Board chairman from 2012 to 2013, and president-elect from 2013 to 2014.