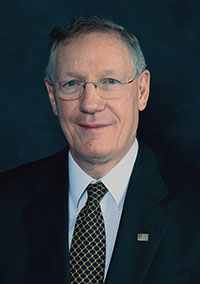 CHICAGO — Richard L. Baron, M.D., FACR, was named president-elect of the Radiological Society of North America (RSNA) Board of Directors today at the Society's annual meeting in Chicago.

As president-elect, Dr. Baron will continue to place a priority on organization and optimization of RSNA's educational offerings, given that lifelong learning is now so essential to the radiology community. Bringing together the RSNA international members and participants to maximize their educational opportunities and experiences will be an important emphasis.

"Through its journals, annual meeting, education programs, and the invaluable contributions of its members, RSNA has been inextricably tied to the evolution of radiology worldwide," he said. "RSNA members and contributors produce a broad array of scientific and educational content that collectively provides an unmatched resource for the imaging community. We would like to continue to grow the communications between radiologists worldwide."

Dr. Baron has authored or co-authored 118 peer-reviewed scientific articles, one book, 53 book chapters and review articles, and numerous scientific and educational exhibits. He has presented hundreds of invited lectures. He has served on the editorial boards and as manuscript reviewer for multiple journals, including Radiology, American Journal of Roentgenology, Journal of Computer Assisted Tomography, Liver Transplantation, Gastroenterology and European Radiology. He served as an associate editor of Radiology from 1991 to 1996.

During his career, Dr. Baron has been an active member of several medical societies and organizations, including the American College of Radiology, Washington State Radiology Society, and the American Roentgen Ray Society (ARRS). He has been a frequent guest examiner for the American Board of Radiology. Dr. Baron served on the Board of Directors of the University of Pittsburgh Medical Center from 1997 to 2002 and on The Joint Commission Professional Technical Advisory Committee from 2007 to 2011.

An RSNA member since 1978, Dr. Baron has served on many committees, such as the Scientific Program Committee, Public Information Advisors Network, Finance Committee and the Education Exhibits Committee, of which he served as chairman from 2006 to 2009. In 2008, he was elected to the RSNA Board of Directors and served as the Board liaison for education and international activities. He served as Board chairman from 2013 to 2014.