Richard L. Ehman, M.D., Named Chair of the RSNA Board 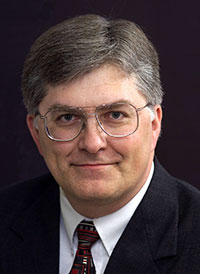 CHICAGO — Richard L. Ehman, M.D., was named chair of the Radiological Society of North America (RSNA) Board of Directors today at the Society's annual meeting in Chicago.

Dr. Ehman is professor of radiology at the Mayo Clinic in Rochester, Minn. As chair of the RSNA Board, he brings expertise in practice, education, research and leadership to support RSNA's mission promoting excellence in patient care through innovation in radiology.

"The RSNA has shown a deep commitment to advancing the science and technology of medical imaging through the extensive scientific programming at its annual meeting and through the phenomenally successful grant program of the Research and Education Foundation," Dr. Ehman said. "As chair, I will work with the Board to build on RSNA's legacy of fostering research to help shape the future of medical imaging."

Dr. Ehman has authored or co-authored over 260 peer-reviewed scientific articles, several textbooks and over 450 abstracts. He has presented over 210 invited lectures and visiting professorships. He has served on the editorial boards for multiple journals, including Radiology, Journal of Computer Assisted Tomography, and Journal of Magnetic Resonance Imaging and has served as associate editor of Magnetic Resonance in Medicine since 1991.

Dr. Ehman served on the Mayo Clinic Board of Governors from 2006 to 2014. In 2014, he was elected as an emeritus member of the Mayo Clinic Board of Trustees. He has been an active member of many medical societies and is past-president of several organizations, including the International Society for Magnetic Resonance in Medicine, the Academy of Radiology Research, and the Society for Body Computed Tomography and Magnetic Resonance in 2013-14.

Dr. Ehman is an NIH-funded clinician-scientist and inventor. He holds more than 40 U.S. and foreign patents, and many of these inventions are widely used in medical care. Dr. Ehman was awarded the gold medal of the International Society for Magnetic Resonance in Medicine in 1995 for his research contributions and the Outstanding Researcher Award of the Radiological Society of North America in 2006. He is a Fellow of the American College of Radiology. In 2010, Dr. Ehman was elected as a member of the Institute of Medicine of the National Academies of Science, which is one of the highest honors in medicine in the U.S.

As an RSNA member, Dr. Ehman has served on the Refresher Course Committee, Scientific Program Committee, Radiology Editorial Board, Research Development Committee, Grant Program Committee and the Research and Education Foundation Board of Trustees. In 2010, he was elected to the RSNA Board of Directors and in 2011 became the liaison for science.