OAK BROOK, Ill. — People with multiple sclerosis (MS) lose myelin in the gray matter of their brains and the loss is closely correlated with the severity of the disease, according to a new magnetic resonance imaging (MRI) study. Researchers said the findings could have important applications in clinical trials and treatment monitoring. The study appears online in the journal Radiology.

Loss of myelin, the fatty protective sheath around nerve fibers, is a characteristic of MS, an inflammatory disease of the central nervous system that can lead to a variety of serious neurological symptoms and disability. MS is typically considered a disease of the brain's signal-conducting white matter, where myelin is most abundant, but myelin is also present in smaller amounts in gray matter, the brain's information processing center that is made up primarily of nerve cell bodies. Though the myelin content in gray matter is small, it is still extremely important to proper function, as it enables protection of thin nerve fibers connecting neighboring areas of the brain cortex, according to Vasily L. Yarnykh, Ph.D., associate professor in the Department of Radiology at University of Washington in Seattle.

"The fact that MS patients lose myelin not only in white but also in gray matter has been proven by earlier post-mortem pathological studies," he said. "However, the clinical significance of the myelin loss, or demyelination, in gray matter has not been established because of the absence of appropriate imaging methods."

To learn more about associations between MS and demyelination in both white and gray matter, Dr. Yarnykh and colleagues used a refined MRI technique that provides information on the content of biological macromolecules – molecules present in tissues and composed of a large number of atoms, such as proteins, lipids and carbohydrates. The new method, known as macromolecular proton fraction (MPF) mapping, has been hampered in the past because of the length of time required for data collection, but improvements now allow much faster generation of whole-brain maps that reflect the macromolecular content in tissues.

"The method utilizes a standard MRI scanner and doesn't require any special hardware—only some software modifications," Dr. Yarnykh said. "MPF mapping allows quantitative assessment of microscopic demyelination in brain tissues that look normal on clinical images, and is the only existing method able to evaluate the myelin content in gray matter."

The researchers looked at 30 MS patients, including 18 with relapsing-remitting MS (RRMS), the most common type of MS initially diagnosed, and 12 with the more advanced type of disease known as secondary progressive MS (SPMS). Fourteen healthy control participants were also included in the study. Each participant underwent MRI on a 3-Tesla imager, and the researchers reconstructed 3-D whole-brain MPF maps to look at normal-appearing white matter, gray matter and MS lesions. The researchers further compared the results of their imaging technique with clinical tests characterizing neurological dysfunction in MS patients.

"The major finding of the study is that the loss of myelin in gray matter caused by MS in its relative amount is comparable to or even larger than that in white matter," said Dr. Yarnykh. "Furthermore, gray matter demyelination is much more advanced in patients with secondary-progressive MS, and it is very strongly related to patients' disability. As such, we believe that information about gray matter myelin damage in MS is of primary clinical relevance."

The improved technique has potentially important applications for MS treatments targeted to protect and restore myelin.

"First, this method may provide an objective measure of the disease progression and treatment success in clinical trials," Dr. Yarnykh said. "And second, assessment of both gray and white matter damage with this method may become an individual patient management tool in the future."

Dr. Yarnykh and colleagues are currently conducting additional research on the new method with the support of the National Multiple Sclerosis Society and the National Institutes of Health.

"This study was done on the participants at a single point in time," he said. "Now we want to compare MS patients with control participants to see how myelin content will evolve over time. We further plan to extend our method to the spinal cord imaging and test whether the combined assessment of demyelination in the brain and spinal cord could better explain disability progression as compared to brain demyelination alone." 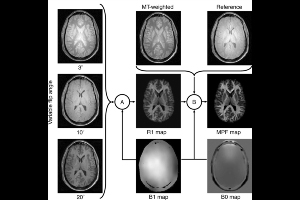 Figure 1. The scheme demonstrating how an MPF map is computed from source MR images. Imaging protocol includes three gradient-echo images with variable flip angles, a gradient-echo image with off-resonance radiofrequency saturation enabling the magnetization transfer effect (MT-weighted image), and a reference image that is a similar gradient-echo image obtained without saturation. Additionally, an MR imager produces maps of the main magnetic field (B0) and radiofrequency field (B1), which are used to correct errors caused by imperfectness of imager's hardware. MPF maps are computed voxel-by-voxel in two steps, (A) and (B), using special software developed by the authors. During the first step (A), a map of the longitudinal relaxation rate (R1) is generated as described in the literature. This map along with an MT-weighted image and a reference image are used to compute an MPF map in the second step (B) based on an iterative algorithm recently described by the authors. 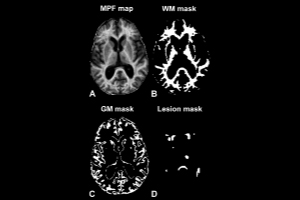