CHICAGO — A minimally invasive treatment for carpal tunnel syndrome provides complete and long-term relief to patients without the use of corticosteroids, according to research being presented today at the annual meeting of the Radiological Society of North America (RSNA). 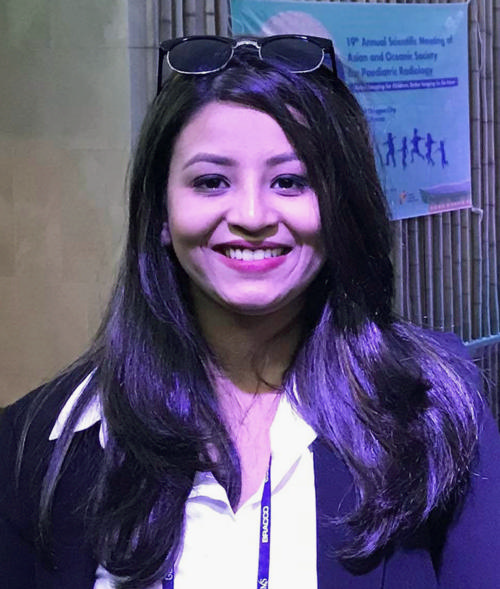 Carpal tunnel syndrome is a form of nerve entrapment neuropathy, which is when one of the body’s peripheral nerves is being pressed on or squeezed. It occurs when the median nerves and tendons inside the carpal tunnel, a narrow and rigid passageway that runs from the forearm to the palm of the hand, are being pressed or squeezed at the wrist. This results in tingling, numbness and/or weakness of the fingers and hands. Carpal tunnel syndrome is the most common and widely known form of entrapment neuropathy, affecting about 3% of the U.S. population.

Surgery is often required to treat carpal tunnel syndrome when non-surgical methods, such as physical therapy or corticosteroid injections, are insufficient. The most common and widely used surgical method involves cutting the carpal ligament to reduce pressure on the median nerve. This method requires making an incision into the wrist.

But this new study shows that a technique called hydrodissection effectively treats nerve entrapments without the need for surgery or corticosteroids. It involves the injection of a liquid, usually saline, into a nerve to separate it from the surrounding tissue. Ultrasound guidance is used to accurately identify nerves.

“Previously, the studies that have been done on ultrasound-guided hydrodissection for carpal tunnel syndrome have used corticosteroids either alone or as a part of the injection, making it difficult to assess whether hydrodissection alone was beneficial, or if it was due to the effect of the steroids,” said study lead author Anindita Bose, M.B.B.S., M.D., senior resident at the University College of Medical Sciences and Guru Teg Bahadur Hospital in Delhi, India.

Follow-up was done at four weeks, 12 weeks and six months. At the four-week mark, all three groups of patients showed a reduction in pain. By the 12-week and six-month mark, both groups that received ultrasound-guided hydrodissection showed further improvement while the group that received just a corticosteroid injection reported a recurrence of symptoms and an increase in BCTQ and VAS scores.

Additionally, ultrasounds showed a significant reduction of median nerve cross-sectional area in both hydrodissection groups. Group one showed a reduction of 43%, and group two showed 46%. Group three showed only an 11% reduction.

The procedure is short, requiring only 10 to 15 minutes. It is also very cost-effective, since it doesn’t require any high-end equipment, Dr. Bose said.

“It came as a pleasant surprise when this simple procedure of ultrasound-guided hydrodissection provided patients with long-term relief,” said co-author Anupama Tandon, M.B.B.S, M.D., professor at the University College of Medical Sciences and Guru Teg Bahadur Hospital. “The patients were highly satisfied, as the cost was low, no anesthesia or hospitalization was needed, and they could go back in an hour’s time and resume their routine work.” 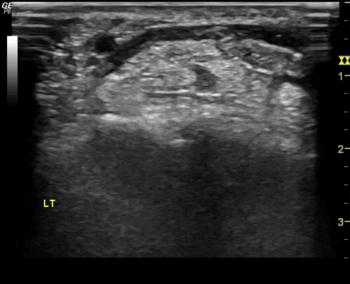 Video 1. Superior dissection
Download MP4
(Right-click and Save As) 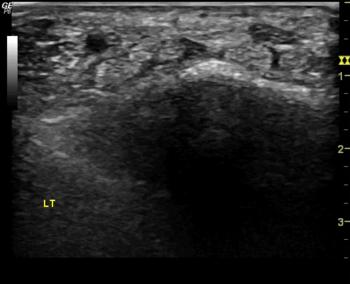 Video 2. Inferior dissection
Download MP4
(Right-click and Save As) 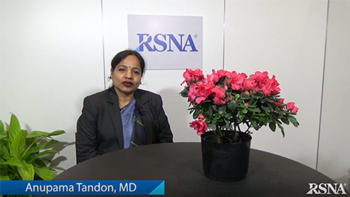 Video 3. Dr. Anupama Tandon discusses her research on a new non-surgical treatment for carpal tunnel syndrome.
Download MP4
(Right-click and Save As) 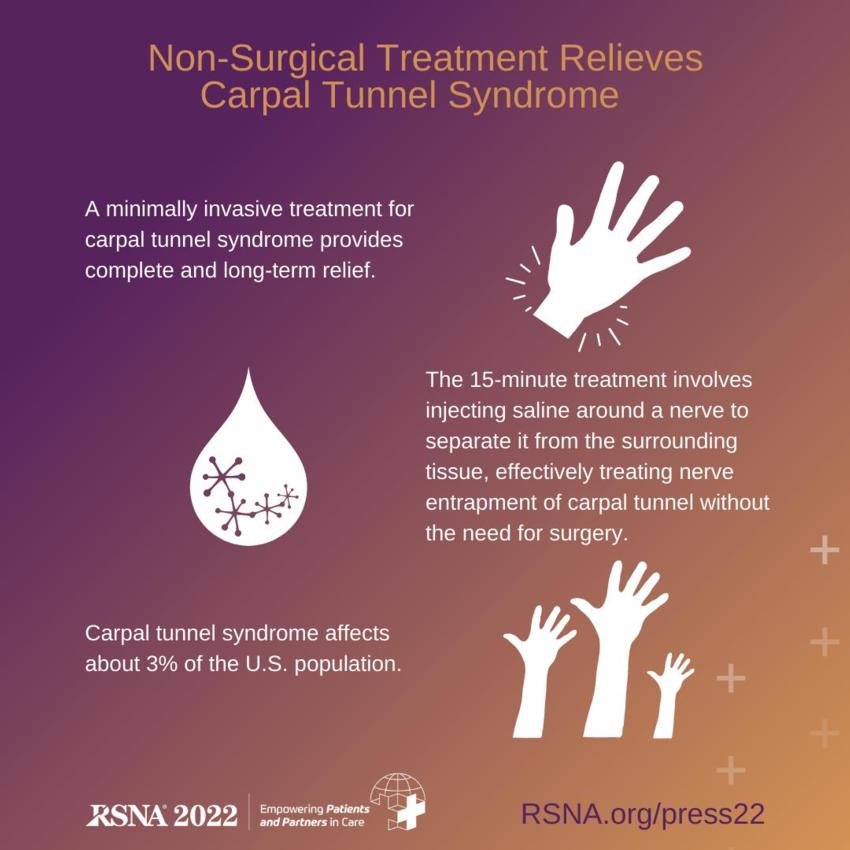 Figure 2. Ultrasound image of median nerve before and after hydrodissection procedure in a patient with carpal tunnel syndrome. This case had cross-sectional area of 12 mm2 pre-procedure that reduced to 7 mm2 post-procedure (dashed yellow lines depicting the median nerve).
High-res (TIF) version
(Right-click and Save As) 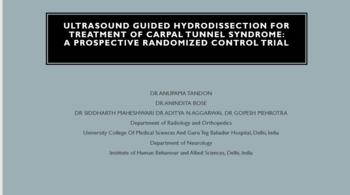