Trained Radiographers May Be a Solution for the Radiologist Shortage

OAK BROOK, Ill. — When double reading screening mammograms, radiographers (technologists) trained for the task perform as well as radiologists in key areas, according to a study published in Radiology, a journal of the Radiological Society of North America (RSNA).

Double reading, the process of interpreting a radiological image with two or more sets of eyes, is the standard of care throughout Europe and it has been shown to improve cancer detection rates while simultaneously keeping recall rates low. The National Health Service Breast Screening Program (NHSBSP) in the United Kingdom (U.K.) has over 80 screening centers in England, where over 2 million women are screened annually.

To mitigate the strains put on the healthcare system due to increased workload and radiologist shortages, the NHSBSP has been utilizing non-radiologists as part of double reading since the 1990s. While the traditional role of radiographers is to perform the mammogram, the NHSBSP recruits radiographers who undergo extensive additional postgraduate training to interpret the mammograms. They also participate in the same quality assurance standards as radiologists. 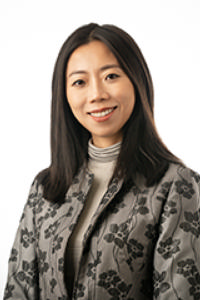 "With the production of reliable individual reader performance data in recent years, it has been possible to produce a robust comparison of the performance of our radiologist and non-radiologist readers in England," said study lead author Yan Chen, Ph.D., associate professor of cancer screening at the University of Nottingham School of Medicine in the U.K.

For this study, researchers analyzed a year's worth of performance data collected from 224 radiologists and 177 radiographers from the NHSBSP. Readers who also took part in the External Quality Assurance (EQA) scheme known as the Personal Performance in Mammographic Screening (PERFORMS) were eligible for this study, and they also gave consent for their individual real-life breast screening performance data to be accessed from the Breast Screening Information System.

Performance metrics that were analyzed were cancer detection rate, recall rate—the percentage of patients called back for follow-up testing—and positive predictive value of recall based on biopsy-proven pathological findings. Positive predictive value reflects the percentage of cancers found among exams for which biopsy was recommended or performed.

Each metric was analyzed according to the reader profession, years of experience and any interaction between them using analysis of variance. Analysis of variance is a statistical formula used to compare variances across the means (or average) of different groups.

"It has been really gratifying to show that there was little difference in the performance of readers from either professional group when we looked at the key breast cancer screening performance metrics of cancer detection rates, recall rates and positive predictive value of recall," said coauthor Jonathan J. James, FRCR, consultant radiologist and director of education and training at the Nottingham Breast Institute at Nottingham University Hospitals NHS Trust.

The results of this study also showed that reading performance was based on the years of experience of the readers. This suggests that appropriate focused training, participation in EQA schemes like PERFORMS, and experience are all factors that contribute to the performance of a reader, rather than simply having a medical degree and the broad radiology education undertaken by all radiologists.

"Many countries are experiencing a shortage of radiologists, and this is compounded by increasing demands and growing screening backlogs," Dr. Chen said. "The outcomes of this study may lead screening programs in other countries to consider the use of physician extenders in breast imaging." 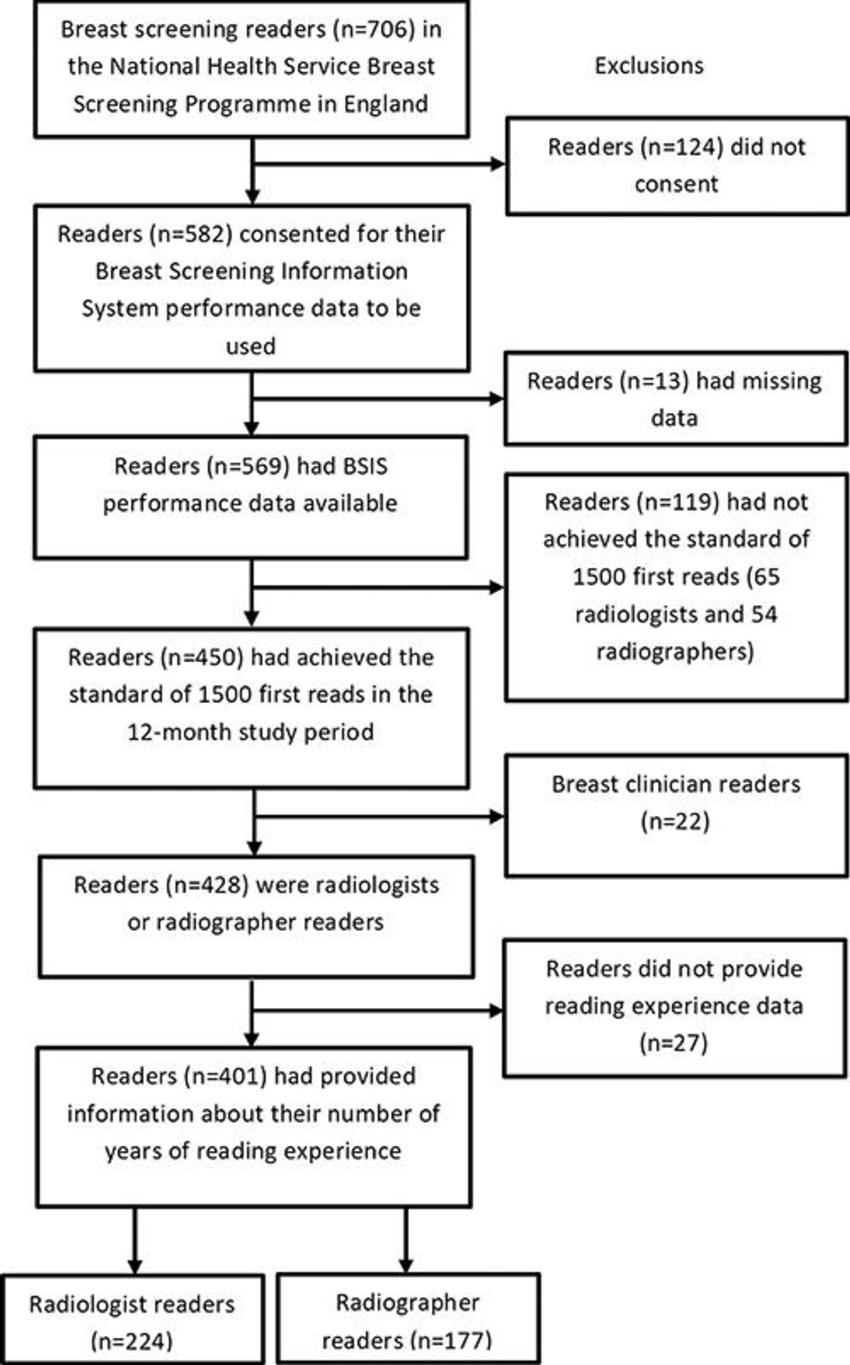 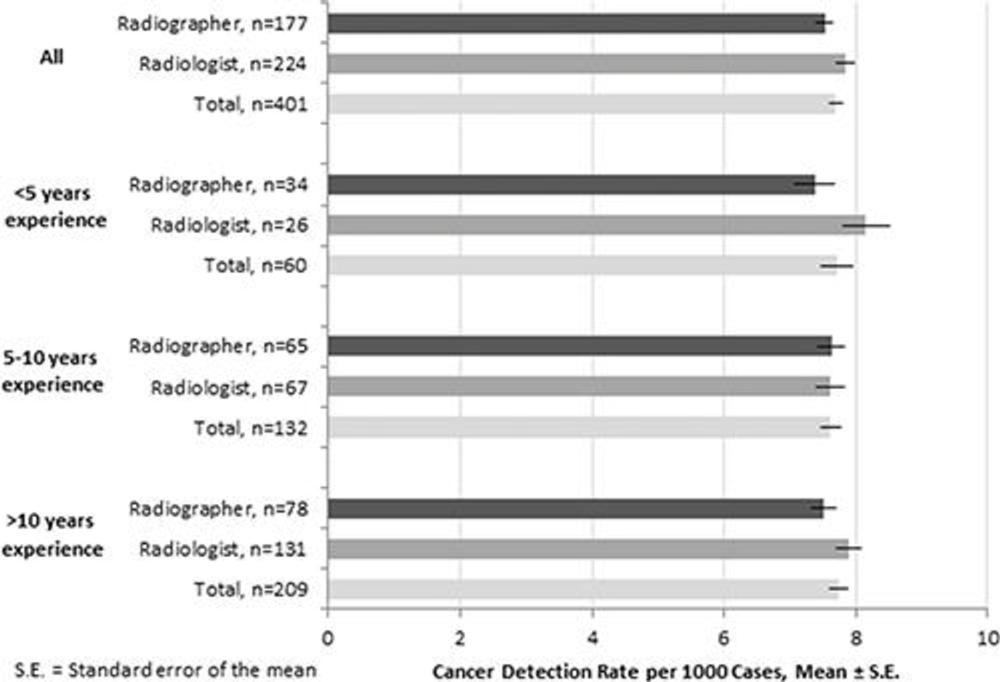 Figure 2. Cancer detection rate (CDR) per 1000 cases read for radiologists and radiographers of different experience levels. There was no difference in CDR and no variation with years of experience.
High-res (TIF) version
(Right-click and Save As) 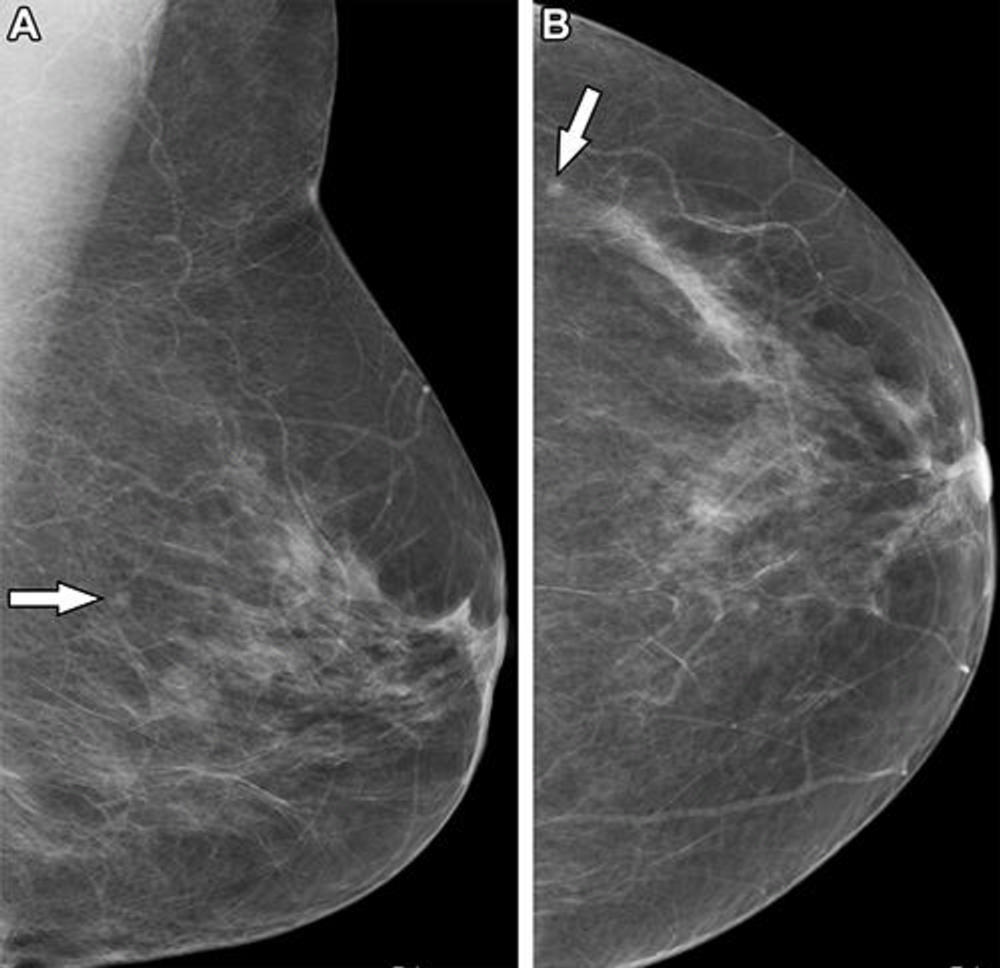 Figure 3. Mammograms in a 50-year-old woman undergoing her first screening mammographic examination. A 3-mm mass (arrow) is demonstrated in the left breast on the (A) mediolateral oblique and the (B) craniocaudal view. It was not recalled by the radiologist who read the mammogram first but was recalled by the radiographer who read the image second. Because the opinions were discordant, the case was recalled for further assessment after arbitration by a third reader. US-guided biopsy demonstrated a 3-mm histologic grade 1 ductal carcinoma.
High-res (TIF) version
(Right-click and Save As) 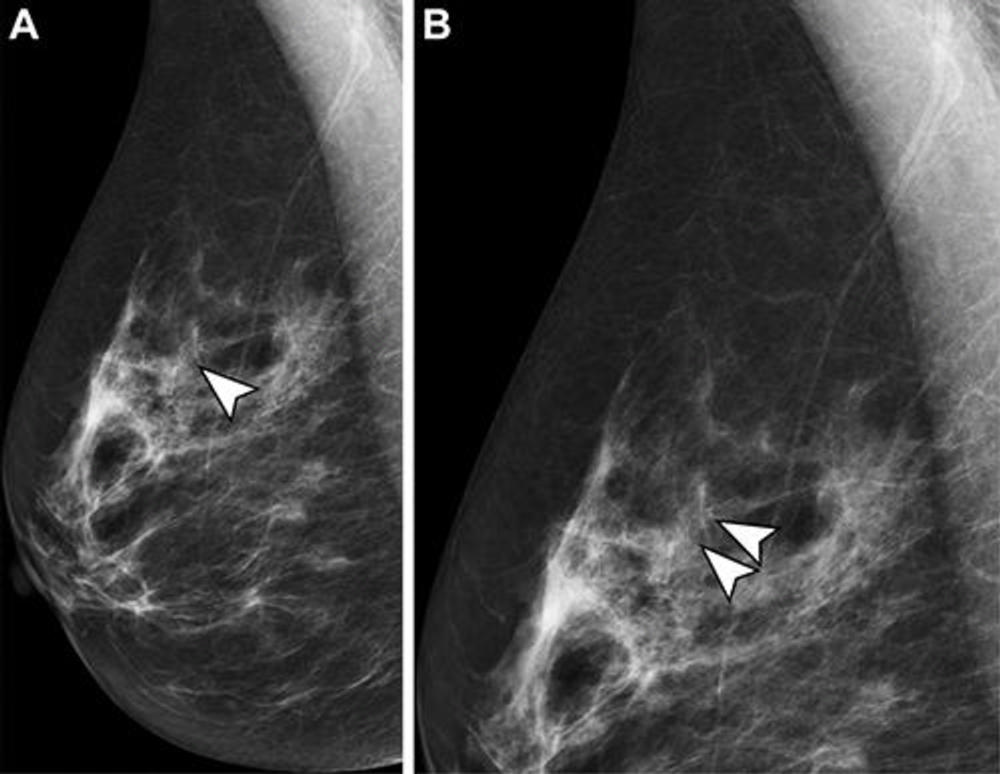 Figure 4. Mammograms in a 54-year-old woman undergoing her second screening mammographic examination. (A) There are 15 mm of pleomorphic microcalcifications (arrowhead) in the superior right breast on the mediolateral oblique view. (B) The microcalcifications (arrowheads) are best observed on this magnified view. It was not recalled by the radiographer who read the mammogram first and was recalled by the radiologist who read the image second. Stereotactic-guided biopsy showed high-grade ductal carcinoma in situ.
High-res (TIF) version
(Right-click and Save As) 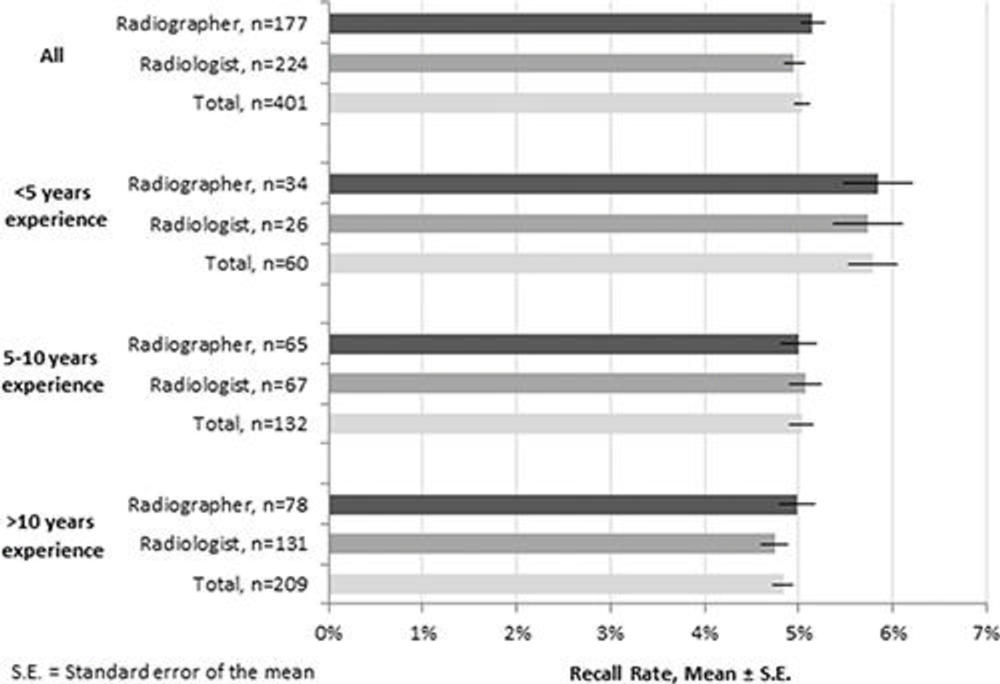 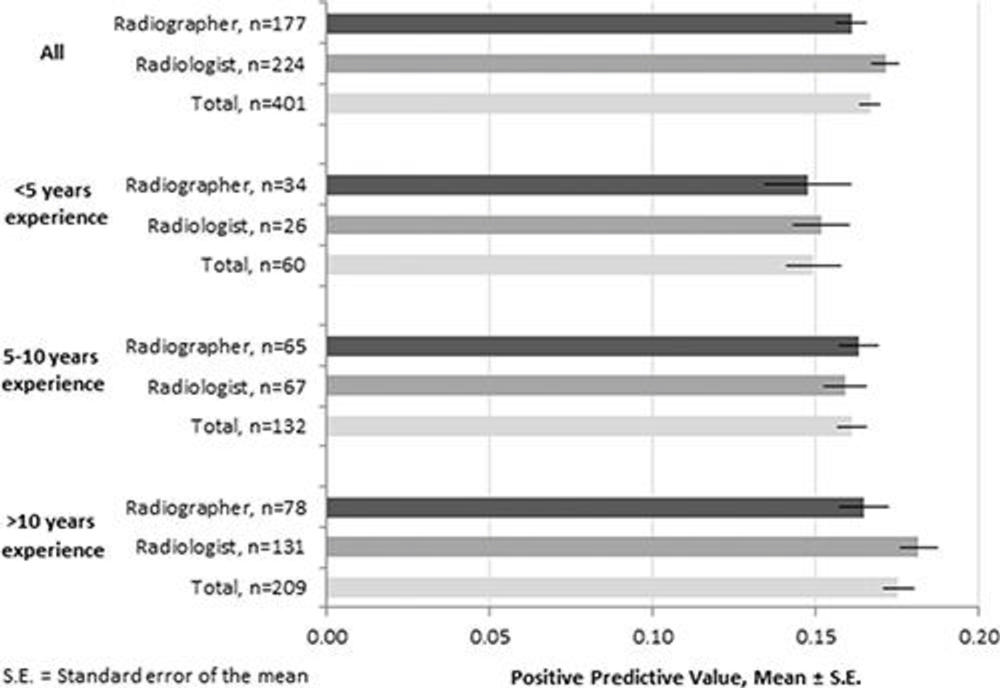 Figure 6. Positive predictive value (PPV) of recall for radiologists and radiographers of different experience levels. There was no difference in PPV between radiologist and radiographers, but a higher PPV was observed with greater reading experience regardless of professional group.
High-res (TIF) version
(Right-click and Save As)