OAK BROOK, Ill. — A technique that uses ultrasound images to determine the depth and shape of the hip socket can accurately predict which infants with hip dysplasia will develop normal hip structure and which remain dysplastic, according to a study in Radiology. Researchers said statistical shape modeling improves on existing techniques and could spare many infants from unnecessary treatment. 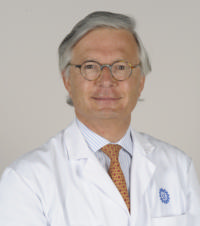 Developmental dysplasia of the hip occurs when the baby’s hip socket is too shallow to cover the head of the thigh bone. In severe cases, the thigh bone can become dislocated from the hip entirely. According to the International Hip Dysplasia Institute, 1 in 10 infants are born with hip instability, meaning the hips can be wiggled in the socket because of loose ligaments. After birth, most will tighten up naturally. One in 100 infants will need treatment for hip dysplasia.

There is no consensus on how and when to treat stable hip dysplasia (Graf type 2, as determined by the Graf classification system). It is estimated that about 80% of stable Graf 2 hips will develop to normal without treatment. But since there is currently no way to differentiate those that will develop to normal in the future compared to those that will not, a large percentage of stable cases are likely to be overtreated, according to study senior author Ralph J. B. Sakkers, M.D., Ph.D., from the Department of Orthopedic Surgery at the University Medical Center Utrecht in Utrecht, the Netherlands. Overtreatment has significant drawbacks.

Avascular necrosis is a disease that results from the temporary or permanent loss of blood supply to the bone.

The Graf classification system is commonly used to evaluate hip dysplasia, but it has limitations. Patients are classified into groups based on acetabular angle appearance on ultrasound images. This angle is derived from the depth and shape of the socket of the hip bone where the head of the femur fits. The Graf system is reported to have a high variability and low agreement in all reported hip dysplasia metrics, and the ultrasound image quality and anatomic appearance of the hip can be affected by probe positioning.

Statistical shape modeling with ultrasound is an alternative method that quantifies the shape of the image of the hip with multiple reference points that each have an X and an Y coordinate in the 2D ultrasound image. It offers potential advantages over existing predictive models.

“By quantifying the shape of the image of the hip with statistical shape modeling, significantly more data are extracted from the ultrasound images as compared to the current methods used,” Dr. Sakkers said.

For the study, Dr. Sakkers and colleagues analyzed the predictive power of the technique in 97 infants with stable developmental dysplasia of the hip.

The results showed that statistical shape modeling accurately predicted which hips developed to normal or remained dysplastic. It also identified hips that benefitted from treatment with the Pavlik harness, a soft splint that encourages normal development of the hip socket.

Although more research is needed to validate the proof of concept, the study findings support a future role for statistical shape modeling in the clinic.

“The method could be automated after validation, similarly to the current automated determination of the skeletal age on X-rays of the hand,” Dr. Sakkers said.

The researchers hope to prove the robustness of the method with additional research in other patient populations with stable hip dysplasia according to the Graf classification.

For patient-friendly information on ultrasound and pediatric imaging, visit RadiologyInfo.org. 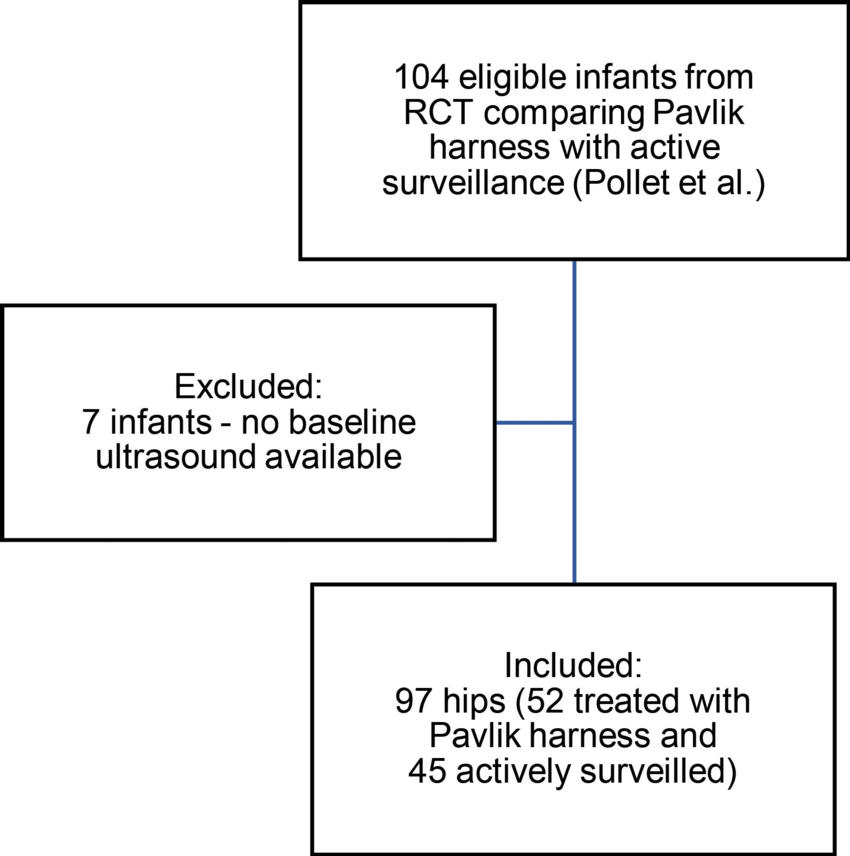 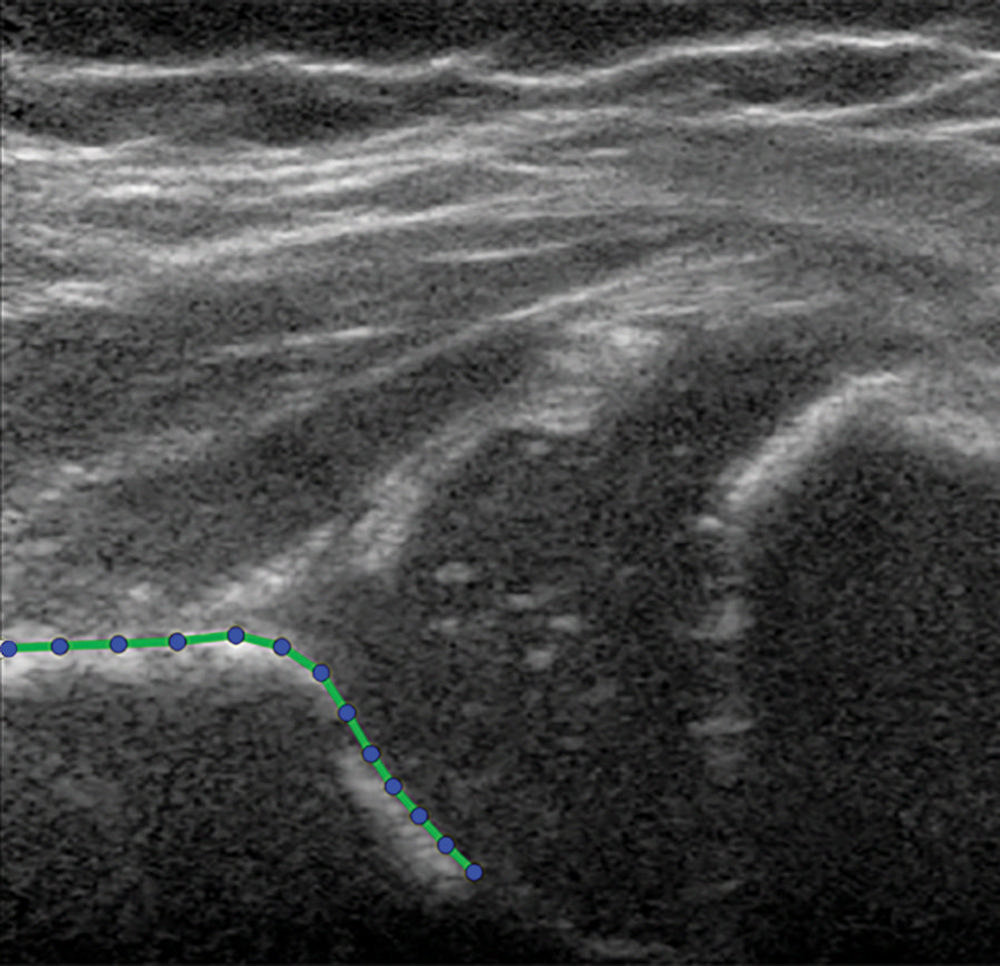 Figure 2. Hip US image in a 3-month-old girl at baseline. No contrast material was used. The presented hip is outlined with the acetabular shape model, consisting of 13 points.
High-res (TIF) version
(Right-click and Save As) 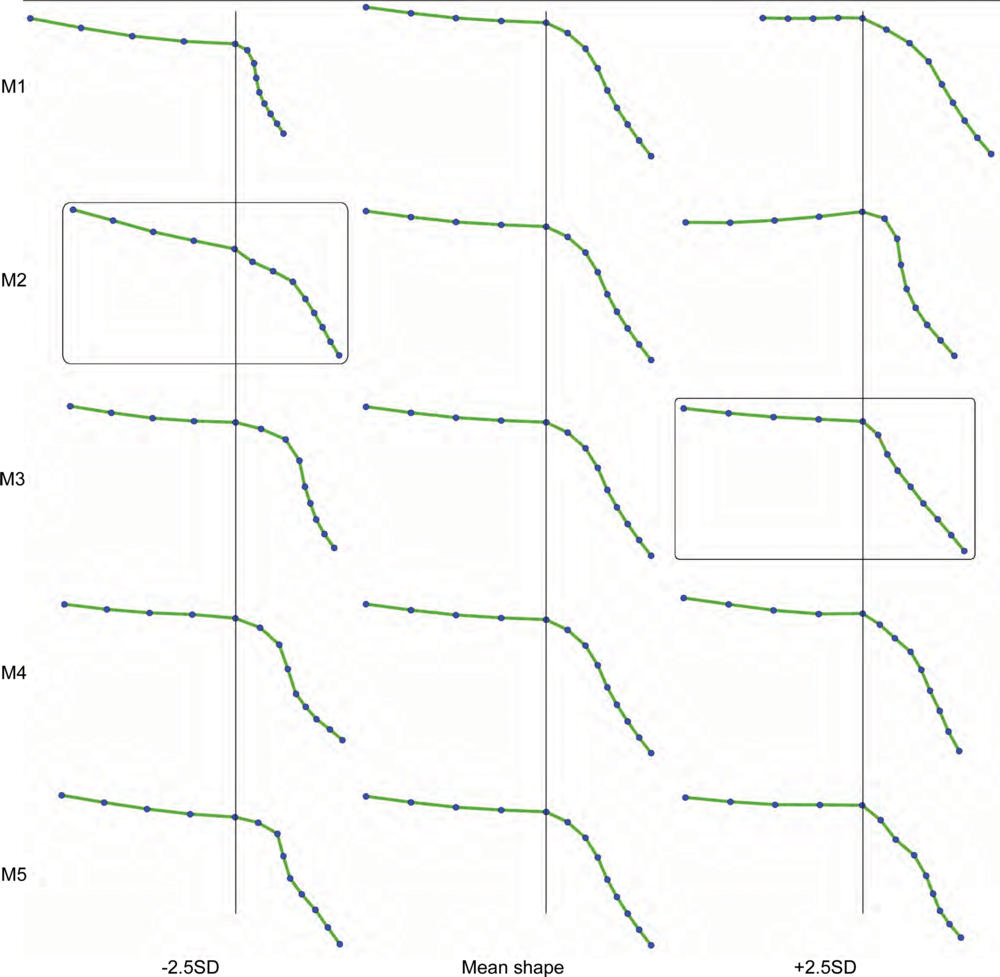 Figure 3. All five modes retained in the statistical shape modeling, which explained 95% of shape variation in all 97 infant hips. Every mode has the same mean shape. For clarity, the modes are depicted with 2.5 standard deviations on each side from the mean shape. The vertical line highlights the same point representing the start of the slope of the bony acetabular roof in each mode. In mode 1, the probe orientation was largely captured and did not associate with persistent or residual hip dysplasia. Boxes indicate the most important shape differences, namely negative mode 2 and positive mode 3, which were significantly associated with persistent hip dysplasia on US images (α angle < 60°). Negative values of mode 2 were also associated with residual hip dysplasia on pelvic radiographs around 1 year of age (acetabular index ˃ 2 standard deviations).
High-res (TIF) version
(Right-click and Save As) 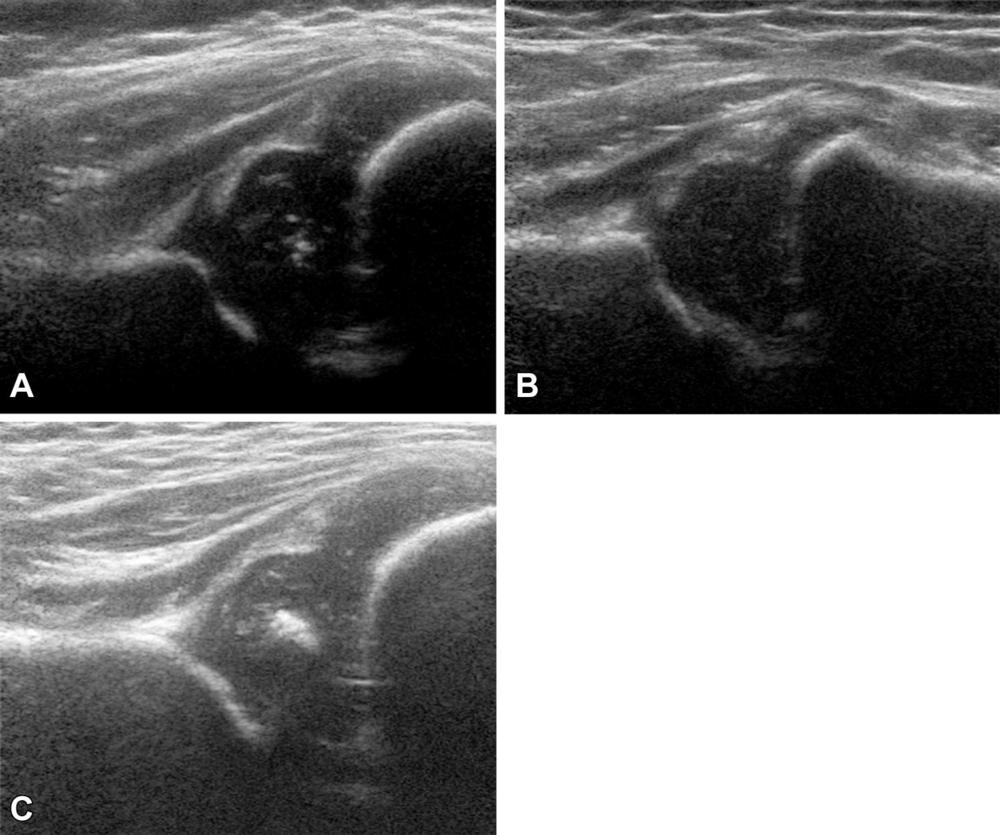 Figure 5. Examples of hip US images acquired with mode 2; no contrast material was used. The presented hips were (A) −1.83 (girl) and (B) +2.12 (girl) standard deviations from the mean shape.
High-res (TIF) version
(Right-click and Save As)

Figure 6. Examples of hip US images acquired with mode 3; no contrast material was used. The presented hips were (A) −1.90 (girl) and (B) +1.49 (girl) standard deviations from the mean shape.
High-res (TIF) version
(Right-click and Save As)