OAK BROOK, Ill. (January 11, 2022) — Less-experienced radiologists are more likely to recommend additional imaging for women undergoing breast cancer screening when they read digital breast tomosynthesis (DBT) images later in the day, according to a new study in Radiology. The results highlight how fatigue may affect radiologists differently depending on their experience level. 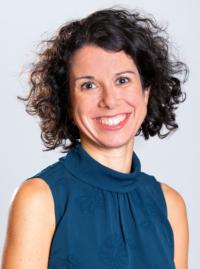 Previous research has shown that fatigue can adversely affect radiologist performance. Less is known about the impact of fatigue on DBT interpretation, a significant gap in knowledge considering that DBT is on track to replace digital mammography as the gold standard for breast cancer screening in the United States. While DBT offers increased cancer detection and lower recall rates, or the rate that women are brought back for additional imaging based on findings on the initial mammogram, it is more cognitively taxing to the radiologist than digital mammography.

“The standard 2D mammogram is four views,” said study co-author Ana P. Lourenco, M.D., from The Warren Alpert Medical School of Brown University in Providence, Rhode Island. “With DBT, we’re looking at 1-millimeter reconstructions of the breast, which means hundreds of views for each exam.”

Dr. Lourenco and two colleagues—experimental psychologist Michael H. Bernstein, Ph.D., and quantitative psychologist Grayson L. Baird, Ph.D., both from the Brown Radiology Human Factors Lab—compared recall and false-positive rates in digital mammography and DBT and their relation to the time of day. They also examined whether radiologist experience affects the potential time-of-day effect.

“It’s useful to know that fatigue is a factor that impacts performance metrics,” Dr. Lourenco said. “As we’re trying to do the best job for our patients and handle increased imaging volumes, these results suggest that regular breaks may have tangible benefits for outcome measures.”

The differences in performance between more- and less-experienced radiologists may be due to different modes of thinking, Dr. Lourenco said. In 2000, psychologists Keith E. Stanovich, Ph.D., and Richard F. West, Ph.D., coined the terms System 1 and System 2 to distinguish between intuitive and conscious reasoning. System 1 thinking operates automatically and quickly, with little or no effort, while System 2 thinking demands more attention.

Follow-up studies with more radiologists and more specific intervals of experience would be useful in developing strategies to moderate the time-of-day effects, according to Dr. Lourenco.

“I hope this study spurs additional research to look at more of the details of what it is that goes on in humans who interpret these images,” she said. 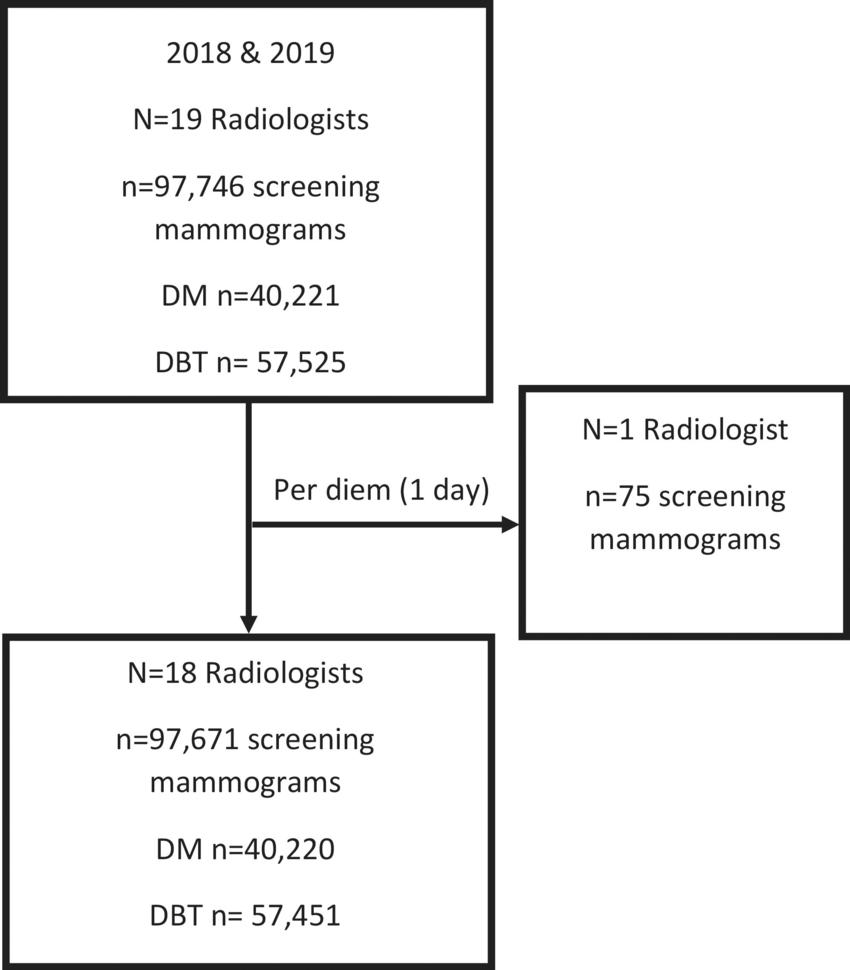 Figure 1. Flow diagram of radiologists and screening mammograms for digital breast tomosynthesis (DBT) and digital mammography (DM) for 2018 and 2019.
High-res (TIF) version
(Right-click and Save As) 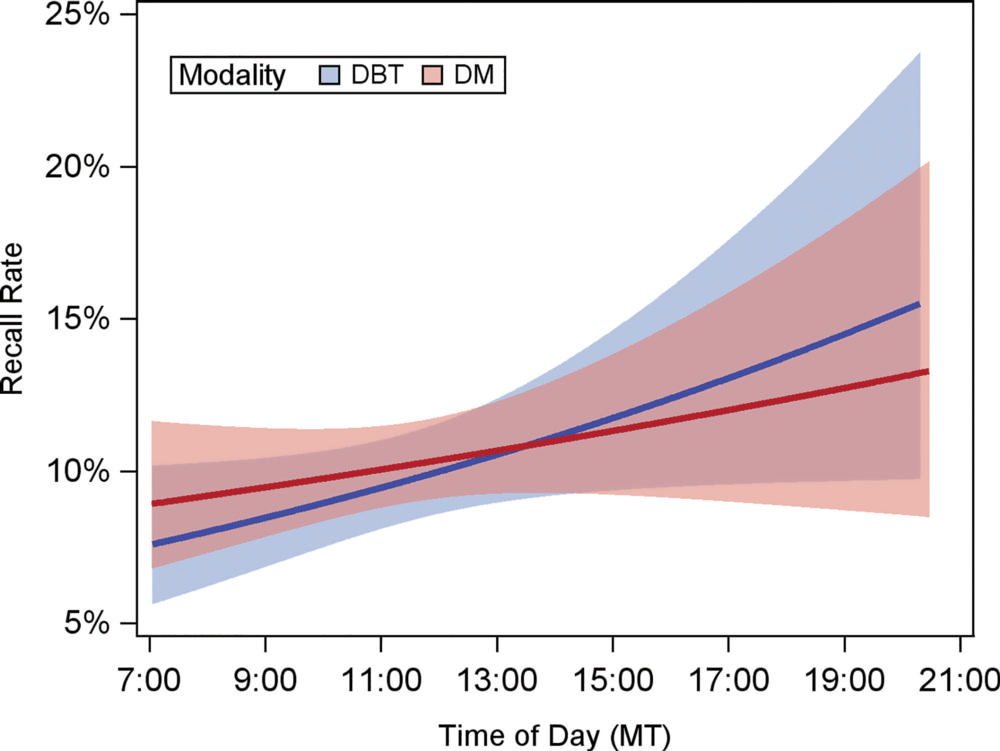 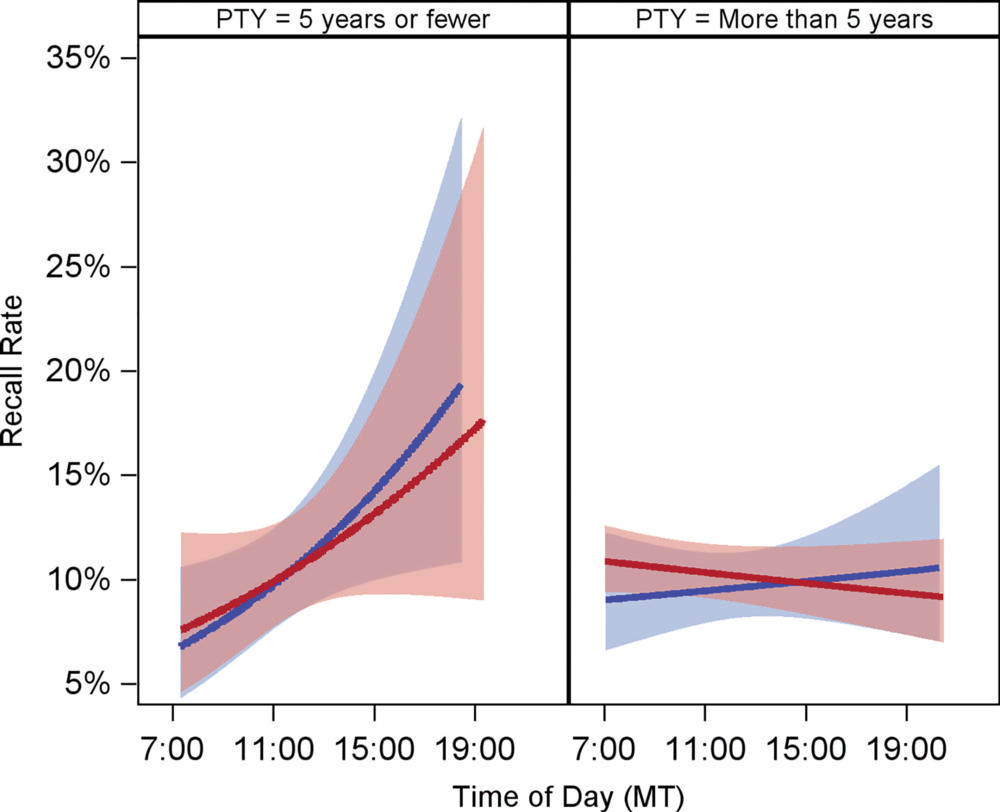