Cooking with Wood May Cause Lung Damage

OAK BROOK, Ill. — Advanced imaging with CT shows that people who cook with biomass fuels like wood are at risk of suffering considerable damage to their lungs from breathing in dangerous concentrations of pollutants and bacterial toxins, according to a study being presented at the annual meeting of the Radiological Society of North America (RSNA).

Approximately 3 billion people around the world cook with biomass, such as wood or dried brush. Pollutants from cooking with biomass are a major contributor to the estimated 4 million deaths a year from household air pollution-related illness. 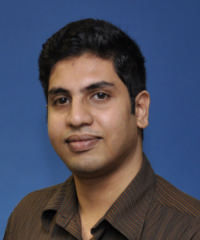 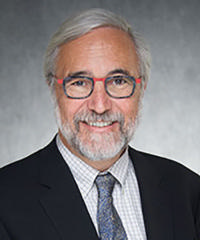 While public health initiatives have tried to provide support to transition from biomass fuels to cleaner-burning liquefied petroleum gas as a fuel source, a significant number of homes continue to use biomass fuels. Financial constraints and a reluctance to change established habits are factors, combined with a lack of information on the impact of biomass smoke on lung health.

“It is important to detect, understand and reverse the early alterations that develop in response to chronic exposures to biomass fuel emissions,” said study co-author Abhilash Kizhakke Puliyakote, Ph.D., a postdoctoral researcher from the University of California San Diego School of Medicine.

A multidisciplinary team led by Eric A. Hoffman, Ph.D., at the University of Iowa, in collaboration with researchers from Periyar Maniammai Institute of Science and Technology, investigated the impact of cookstove pollutants in 23 people cooking with liquefied petroleum gas or wood biomass in Thanjavur, India.

The researchers measured the concentrations of pollutants in the homes and then studied the lung function of the individuals, using traditional tests such as spirometry. They also used advanced CT scanning to make quantitative measurements—for instance, they acquired one scan when the person inhaled and another after they exhaled and measured the difference between the images to see how the lungs were functioning.

Analysis showed that the ones who cooked with wood biomass were exposed to greater concentrations of pollutants and bacterial endotoxins compared to liquefied petroleum gas users. They also had a significantly higher level of air trapping in their lungs, a condition associated with lung diseases.

“Air trapping happens when a part of the lung is unable to efficiently exchange air with the environment, so the next time you breathe in, you’re not getting enough oxygen into that region and eliminating carbon dioxide,” Dr. Kizhakke Puliyakote said. “That part of the lung has impaired gas exchange.”

The researchers found a smaller subset of the biomass users who had very high levels of air trapping and abnormal tissue mechanics, even when compared to other biomass users. In about one-third of the group, more than 50% of the air they inhaled ended up trapped in their lungs. 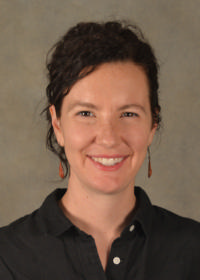 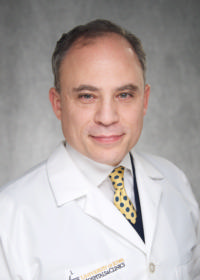 “This increased sensitivity in a subgroup is also seen in other studies on tobacco smokers, and there may be a genetic basis that predisposes some individuals to be more susceptible to their environment,” Dr. Kizhakke Puliyakote said.

CT added important information on smoke’s effect on the lungs that was underestimated by conventional tests.

“The extent of damage from biomass fuels is not really well captured by traditional tests,” Dr. Kizhakke Puliyakote said. “You need more advanced, sensitive techniques like CT imaging. The key advantage to using imaging is that it’s so sensitive that you can detect subtle, regional changes before they progress to full blown disease, and you can follow disease progression over short periods of time.”

The lack of emphysema in the study group suggests that exposure to biomass smoke is affecting the small airways in the lungs, Dr. Kizhakke Puliyakote said, although more research is needed to understand the disease process. Regardless, the study results underscore the importance of minimizing exposure to smoke. Even in the absence of overt symptoms or breathing difficulties, the lung may have injury and inflammation that can go undetected and potentially unresolved in some people.

“For people exposed to biomass smoke for any extended duration, it is critical to have a complete assessment of lung function by health care professionals to ensure that any potential injury can be resolved with appropriate interventions,” Dr. Kizhakke Puliyakote said.

While the study focused on cooking with biomass, the findings have important implications for exposure to biomass smoke from other sources, including wildfires.

“In conjunction with the increasing prevalence of biomass smoke due to wildfires in the U.S., this study can provide valuable insights regarding similar study designs serving to understand what is certain to be a growing assault on lung health.” 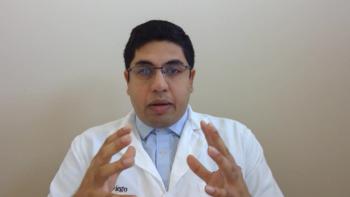 Video 1. Dr. Abhilash Kizhakke Puliyakote discusses his research on lung damage to individuals who cook with biomass (wood) fuel.
Download MP4
(Right-click and Save As) 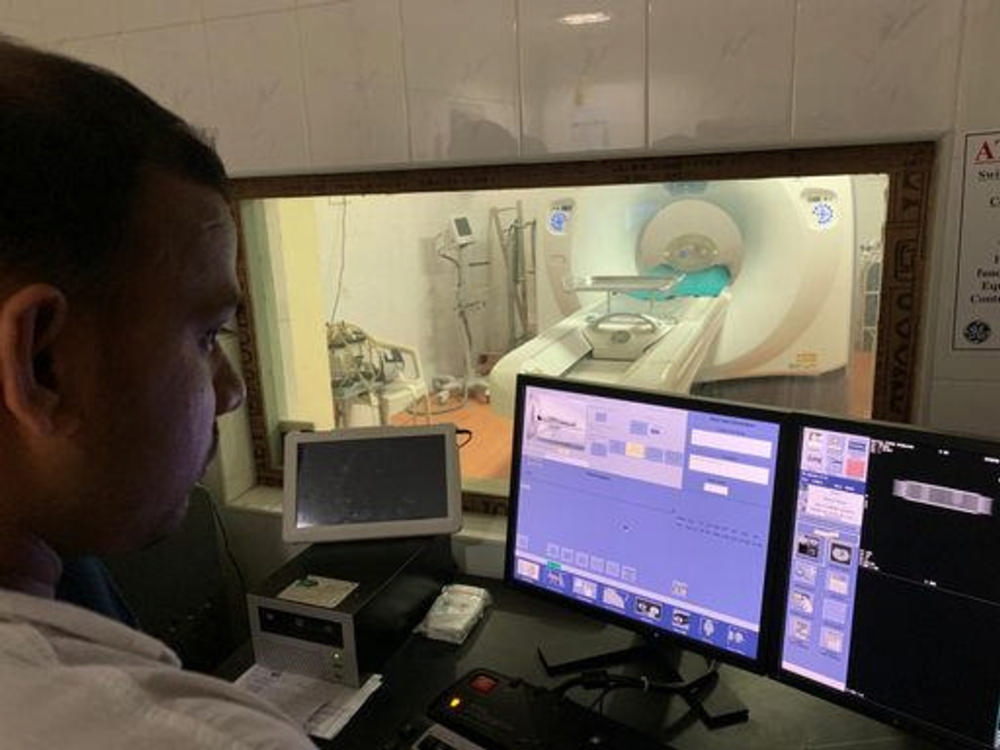 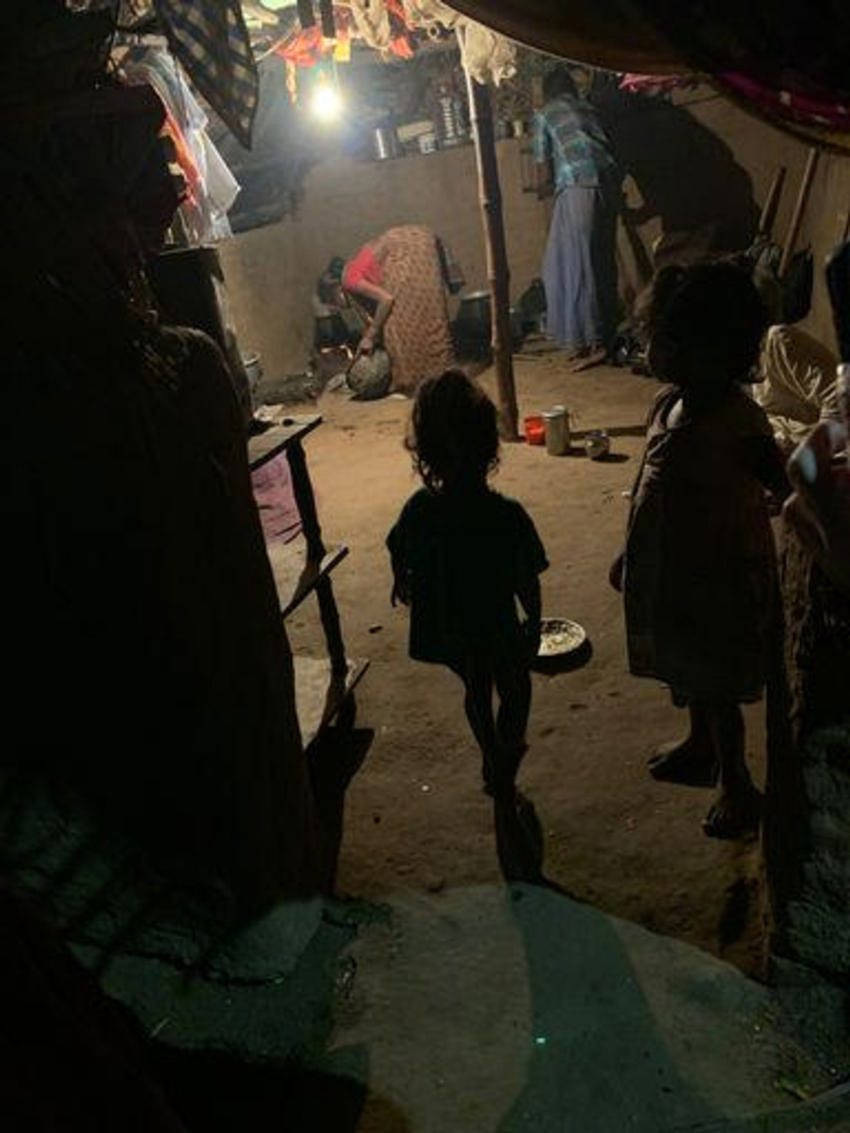 Figure 2. Typical home environment of study individuals cooking with solid biomass (wood). There is significant overlap in the living quarters and the cooking environment, leading to chronic exposure.
High-res (TIF) version
(Right-click and Save As) 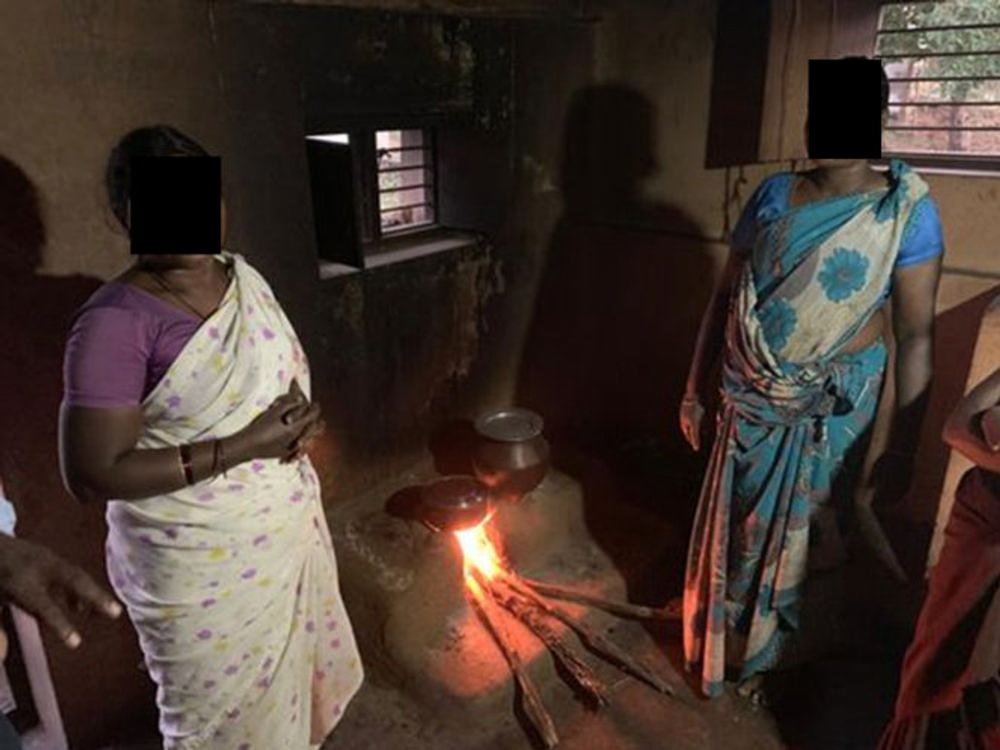 Figure 3. Kitchen location showing the cooking stove and wood fuels used and lack of sufficient ventilation to clear the smoke by-products from biomass fuel use.
High-res (TIF) version
(Right-click and Save As) 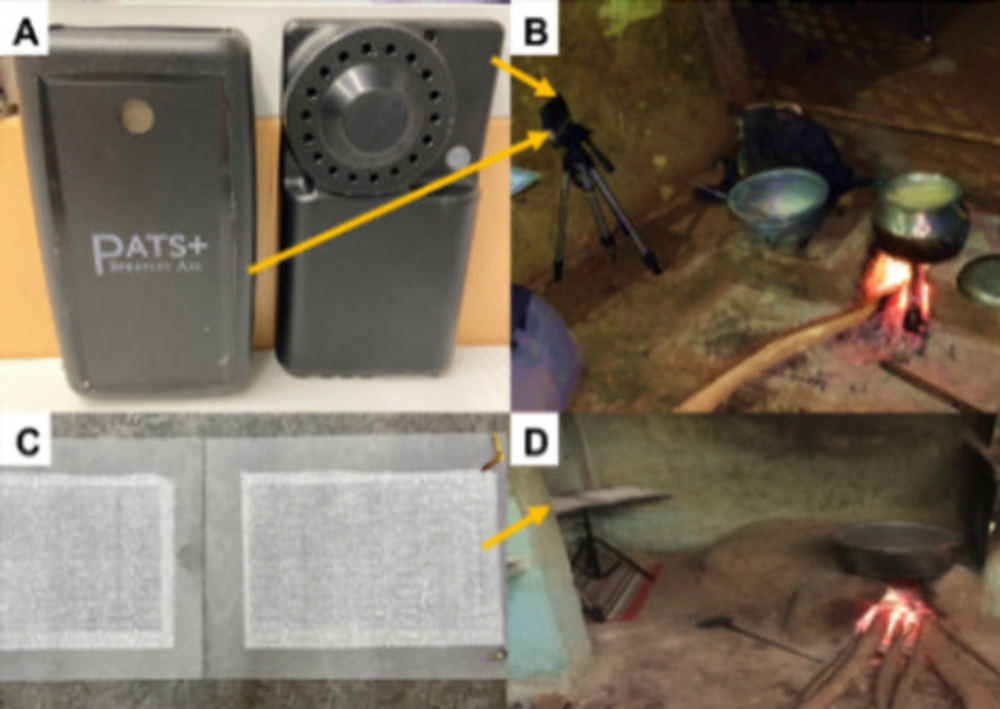 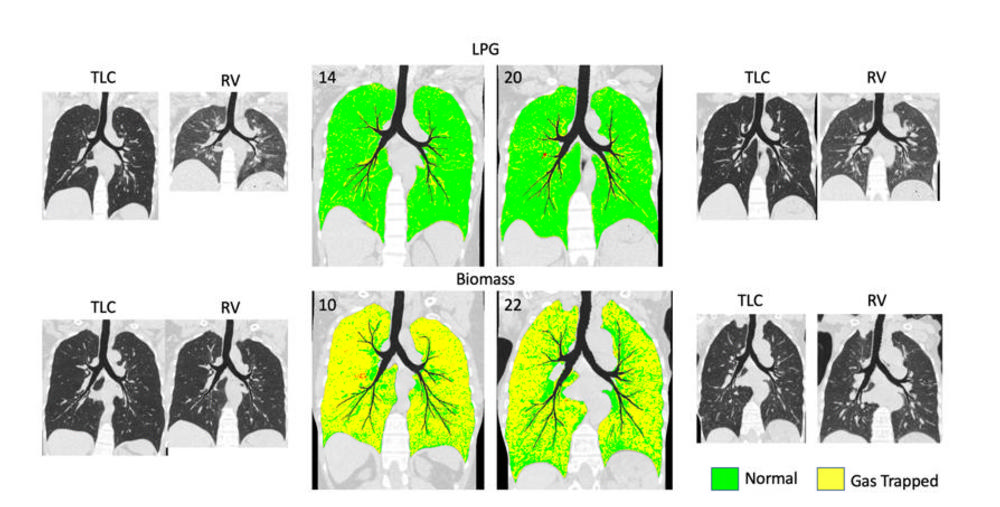 Figure 5. Hyperion views and the disease probability measure (DPM: Vida Diagnostics, Coralville, Iowa) in two individuals cooking with liquefied petroleum gas (top row) and two disease vulnerable biomass cooks (bottom row). Individual patient images are shown on either side of the DPM maps. Green and yellow correspond to normal and air-trapped regions, respectively. From the Hyperion views, one can see a large volume change and increased lung density from TLC to RV images which is lacking in the image comparisons for the Biomass-cooks.
High-res (TIF) version
(Right-click and Save As)

Figure 6. Percent of air trapping estimated using the density threshold method (A) and image registration-based method, the disease probability map (B). Due to increased lung density from diffuse inflammation, the threshold-based assessment severely underestimates the extent of lung air trapping.
High-res (TIF) version
(Right-click and Save As) 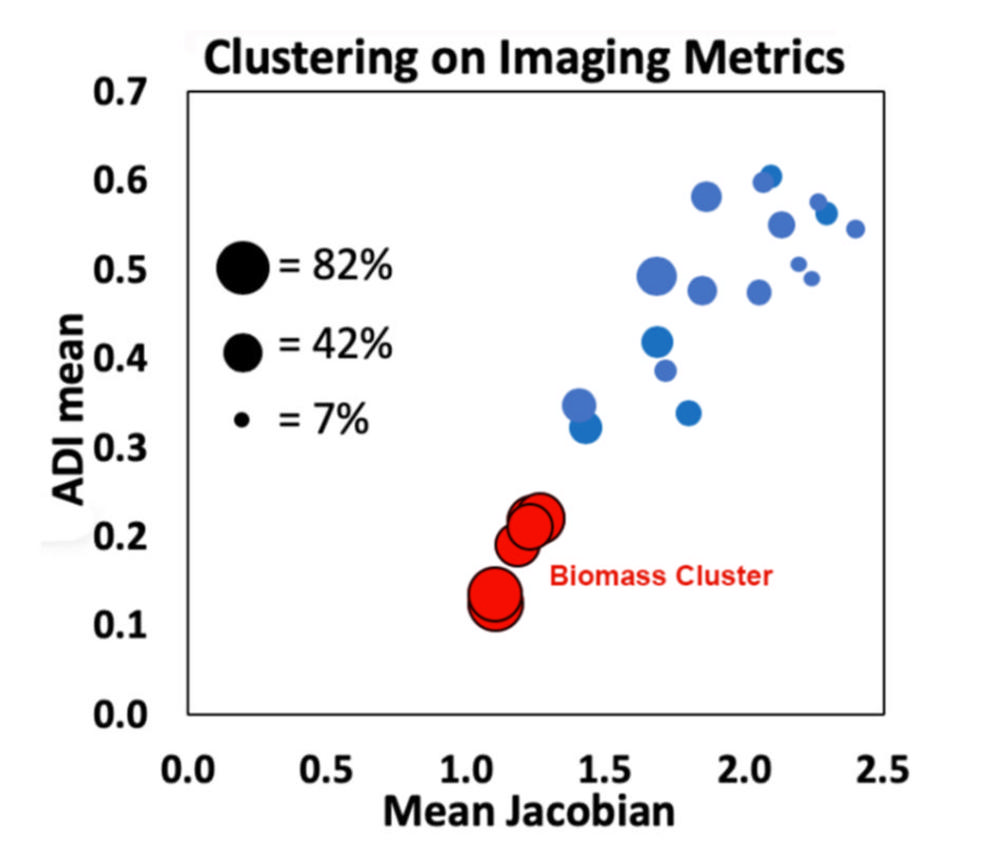 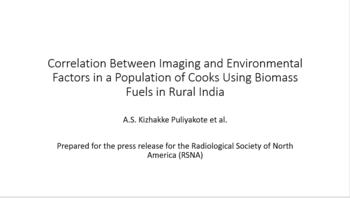