Lung Injuries from Vaping Have Characteristic Patterns on CT

OAK BROOK, Ill. — Injuries to the lungs from vaping have suggestive patterns on CT scans that could help physicians make accurate diagnoses and reduce unnecessary biopsies, according to a new study published in the journal Radiology: Cardiothoracic Imaging.

Electronic nicotine delivery systems such as e-cigarettes and vaporizers heat nicotine, flavorings and other chemicals to create an aerosol that the user inhales. Use of these devices has grown rapidly over the past decade, particularly among young people. The inhaled aerosols, commonly referred to as “juices,” may contain a number of potentially toxic or damaging substances.

Last year, the Centers for Disease Control and Prevention (CDC) received its first report on an illness known as electronic cigarette or vaping product use-associated lung injury (EVALI). Three criteria define EVALI: e-cigarette use or vaping within 90 days from symptom onset, abnormalities on chest imaging and the exclusion of other potential sources of injury like infection. Almost 3,000 hospitalized EVALI cases were reported to CDC within six months of the first case, with 68 deaths confirmed. 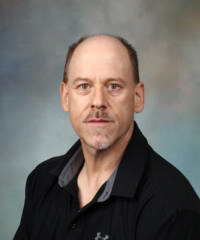 Also last year, pathologists at Mayo Clinic in Scottsdale, Arizona, published a paper describing a peculiar pattern of lung injury in young people using vape products. The injuries were wrapped around the bronchi, the tubes that branch off the trachea into the lungs.

Mayo Clinic radiologist Michael B. Gotway, M.D., recently expanded on that study by looking for patterns on chest CT scans that might correlate with the previously observed pathological findings. The study included 26 patients who met the EVALI criteria and had undergone CT and biopsy or some other type of tissue removal. Dr. Gotway and colleagues classified the CT scan pattern according to several different recognized patterns. One pattern is ground glass opacity, an area on the CT scan that appears whiter than normal but does not obscure the underlying structure of the lung. Another is consolidation, or denser white areas on CT.

“We read the CT scan and then plugged it into one of those patterns and correlated that with histopathology,” Dr. Gotway said. “What we found out was that ground glass opacity, sometimes with consolidation, is by far the most common pattern that we see with EVALI.”

That pattern was found more commonly than a CT pattern resembling subacute hypersensitivity pneumonitis, a term for the inflammation of lung tissue.

The findings of this study and other related research could provide an important diagnostic tool for physicians treating young patients who express symptoms like chest pain and shortness of breath.

“We hope to make radiologists aware that if they see diffuse lung opacities in a younger patient without clearly defined causes, then they may want to seriously consider that the patient could have a vaping injury,” Dr. Gotway said. “Patients may not readily admit that they’re using the material, but if a radiologist recognizes these patterns and then tells the clinician that it could be vaping-induced injury, then maybe they could test for a nicotine metabolite or ask the patient about this exposure.”

Such an approach could help reduce lung biopsies, which carry considerable expense, some risk of complications and additional anxiety for the patient.

“These radiological findings will be especially beneficial to physicians to help them determine potentially less invasive treatment options,” Dr. Gotway said. “We could potentially make that diagnosis noninvasively through cooperation with our clinical colleagues. By alerting them to a scan pattern that is suggestive of the possibility of EVALI, we may actually save patients from having to meet a surgeon.”

The researchers found some good news in their study, as it appears that signs of EVALI on imaging may resolve quickly with cessation of use of the offending agent, often supplemented by corticosteroid therapy. 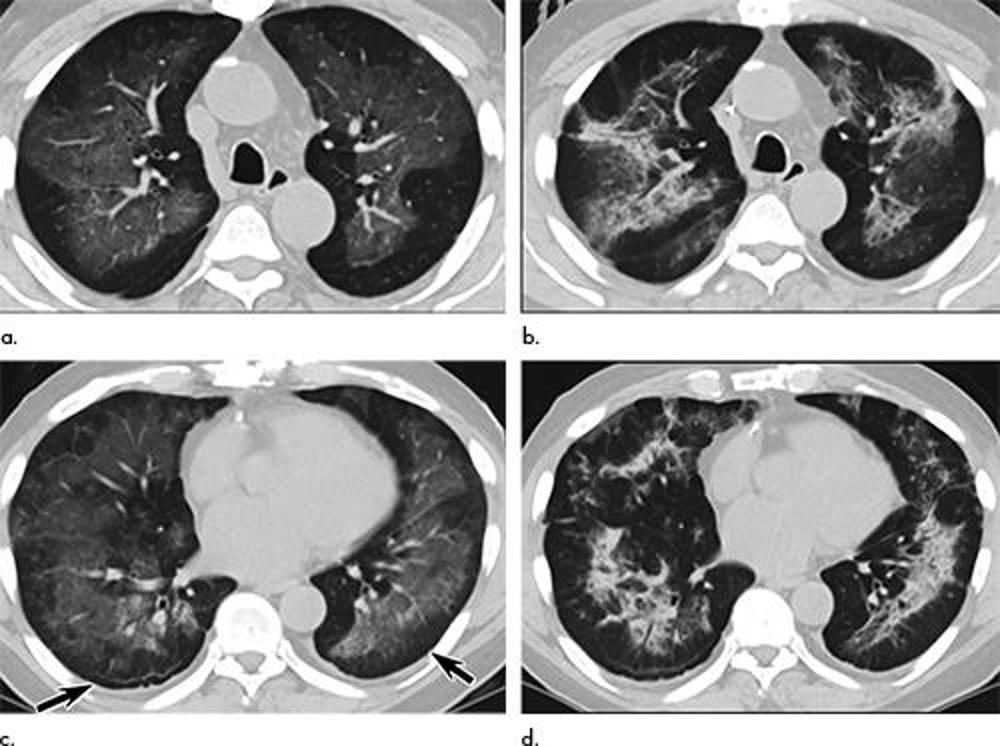 Figure 1. Electronic cigarette or vaping product use–associated lung injury in a 51-year-old man manifesting as an acute lung injury pattern at CT with subsequent organization. (a, c) Axial unenhanced CT images at presentation through (a) mid and (c) lower lungs show ground-glass opacity with subpleural sparing (arrows); this distribution was present in 45% of chest CT studies at presentation in our cohort (11). (b, d) Axial unenhanced CT images obtained 6 days later show ground-glass opacity has transitioned to consolidation and mild architectural distortion, consistent with developing organization. The patient was initially treated with antibiotics followed by corticosteroid therapy, with slow clinical improvement.
High-res (TIF) version
(Right-click and Save As) 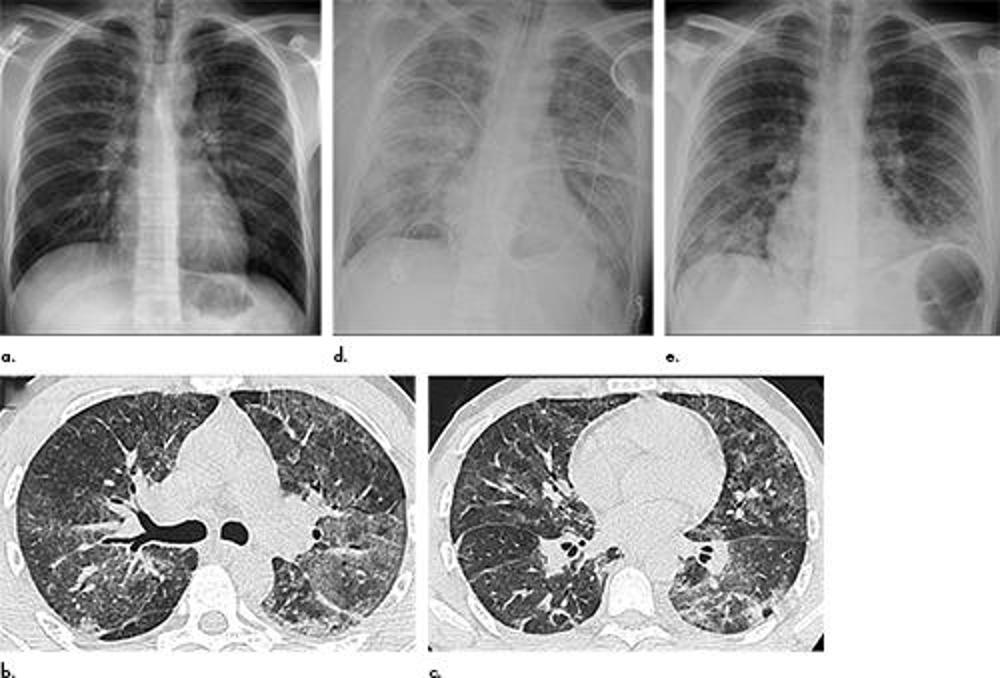 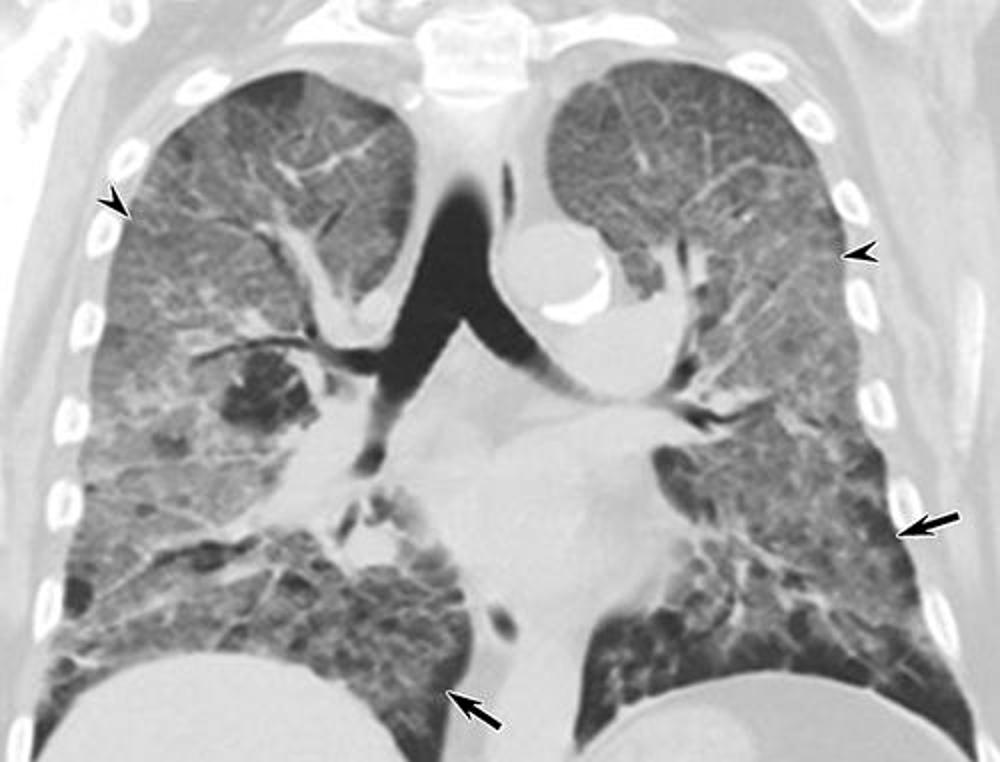 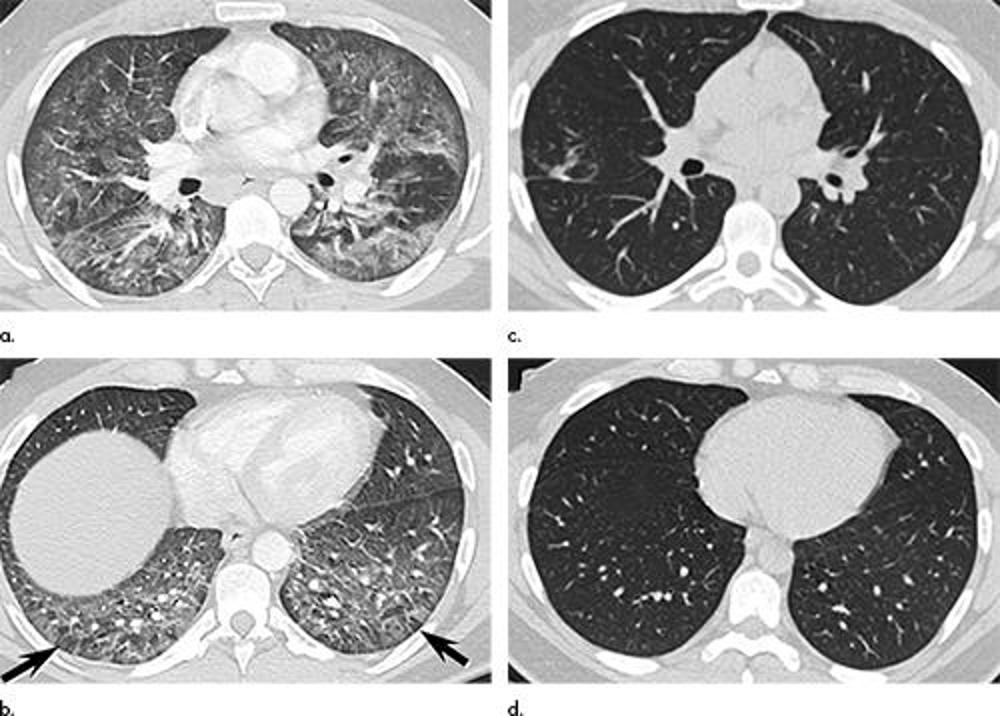 Figure 5. Images in a 39-year-old man with respiratory failure hospitalized for 10 days with an electronic cigarette or vaping product use–associated lung injury manifesting as an acute lung injury pattern at CT with some CT features suggesting a hypersensitivity pattern. (a, b) Axial enhanced CT images through the (a) mid and (b) lower lungs at presentation show multifocal areas of ground-glass opacity with prominent lobular low attenuation in the bases (arrows) suggesting small airway obstruction in addition to the ground-glass opacity. (c, d) Axial unenhanced CT images through the (c) mid and (d) lower lungs obtained 64 days after presentation show complete clearing of lung parenchymal abnormalities. Right middle lobe opacity (c) reflects site of surgical lung biopsy, which showed acute lung injury with organization, but no granulomas or other features typical of hypersensitivity pneumonitis.
High-res (TIF) version
(Right-click and Save As) 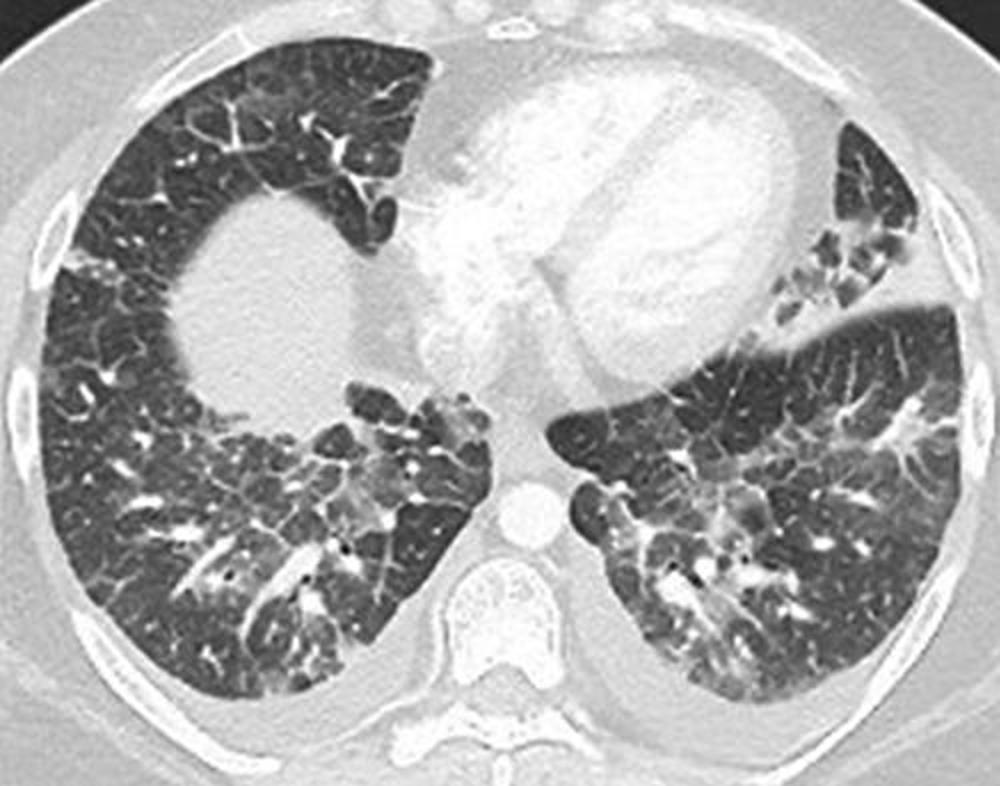 Figure 7. Electronic cigarette or vaping product use–associated lung injury in a 41-year-old woman initially manifesting as an organizing pneumonia pattern at CT, with subsequent evolution into an atypical appearance. (a) Axial unenhanced chest CT image through the lower lungs shows lower lobe predominant peribronchial and subpleural consolidation consistent with an organizing pneumonia pattern. CT scan obtained 54 days later (not shown) revealed organizing consolidation in the mid lungs with near complete resolution of the lower lobe abnormalities, consistent with a migratory pattern. (b, c) Axial unenhanced chest CT images through the (b) mid and (c) lower lungs obtained 84 days after the presentation CT, and 2 days prior to surgical lung biopsy, show resolution of the lower lobe consolidation at presentation, but development of multiple poorly defined pulmonary nodules (arrows). Surgical lung biopsy results showed acute lung injury with organization. The patient was treated with corticosteroids and was clinically improving at last follow-up.
High-res (TIF) version
(Right-click and Save As) 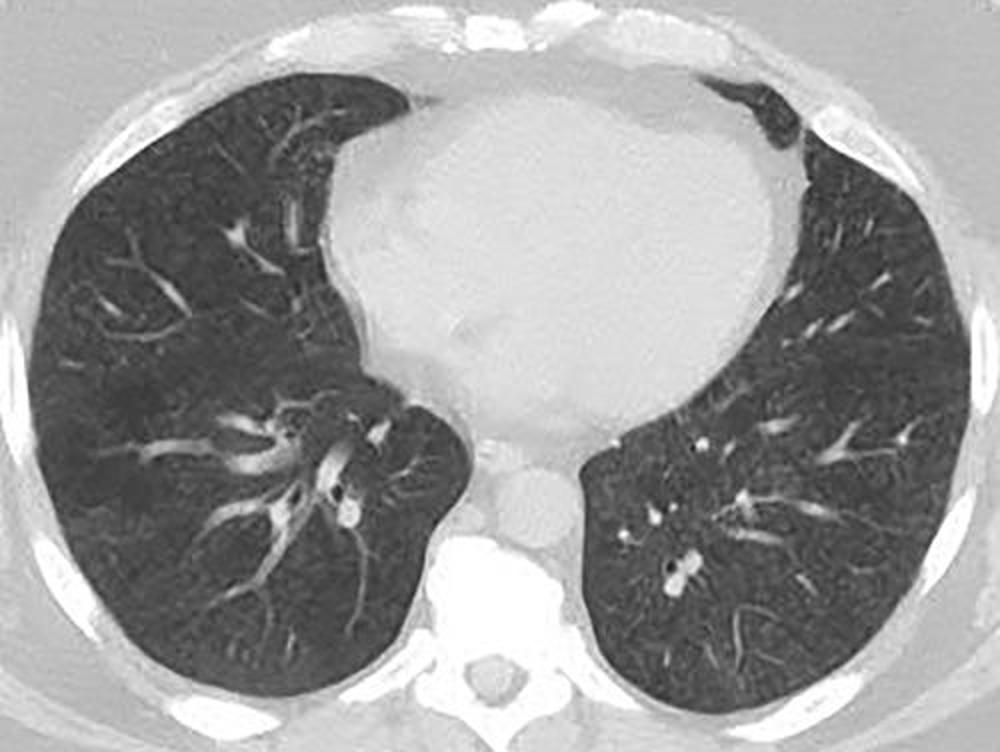 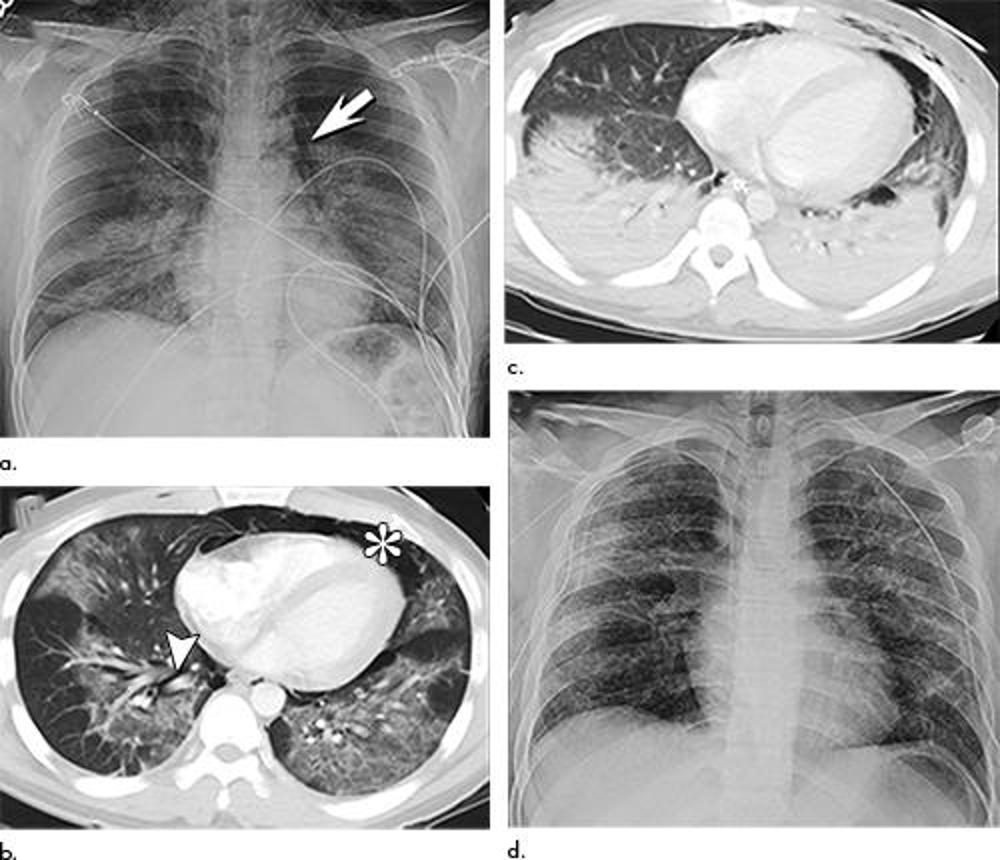