OAK BROOK, Ill. (July 16, 2020) — Racial/ethnic minority patients admitted to the hospital with COVID-19 infection are more likely to have more severe disease on chest X-rays than white/non-Hispanic patients, increasing the likelihood of adverse outcomes, such as intubation or death, according to a study published in the journal Radiology.

Emerging data show that racial/ethnic minorities have been disproportionately affected by COVID-19. Socioeconomic factors and pre-existing medical conditions like hypertension are likely contributing factors to this disparity. Furthermore, limited English proficiency may introduce additional linguistic and health literacy barriers to care, potentially resulting in delays seeking medical attention and greater severity of disease at the time of admission to the hospital with COVID-19 infection.

“It got to the point where half of our patient population admitted with COVID-19 were underrepresented minorities,” said study coauthor Efren J. Flores, M.D., a radiologist at MGH.

Dr. Flores and colleagues set out to study these observed disparities in greater detail with an eye toward developing a better understanding of some of the factors involved. They hope to use this information to guide risk mitigation strategies and improve outcomes among racial/ethnic minority groups. They looked at data from 326 patients hospitalized with confirmed COVID-19 infection between March 27 and April 10, 2020. Analysis of chest X-ray results revealed that non-white patients had significantly more severe lung disease on admission than white/non-Hispanic patients. Increased disease severity on chest X-rays increased the likelihood of adverse clinical outcomes, including admission to the intensive care unit, intubation and death.

As expected, the increased severity of lung disease on chest X-rays among non-white patients correlated with a combination of factors, including delay in seeking care at the hospital, higher prevalence of pre-existing comorbidities and limited English proficiency.

“Limited English proficiency is an additional socioeconomic factor that really influences many aspects of access to care,” Dr. Flores said. “When we were first learning how the disease spreads, there was all this rapidly evolving information coming out that was not available in languages other than English, and that lag in availability of actionable health information for non-English speaking individuals was really critical for many patients trying to navigate a complex medical system with a disease from a virus that is so aggressive.”

The connection between limited English proficiency and disease severity underscores the importance of having multilingual, culturally tailored health information available, Dr. Flores said, especially as the number of infections climbs in different parts of the country.

Disparities in access to care and disease severity are not limited to linguistic barriers. Racial/ethnic non-white communities disproportionately experience lower socioeconomic status, adding another layer of complexity when accessing care. Living and working arrangements also likely played a role in the severity of COVID-19 among these patients, the study authors said. Racial and ethnic minority populations tend to live in multigenerational households and communities of higher population density, making social distancing difficult. In addition, they are more often employed in jobs not conducive to remote work with limited paid time off, thus increasing their exposure to COVID-19.

“Many of these patients delay their care because they’re considered essential workers and they don’t have a lot of sick leave, but also it’s difficult for them to leave because they are living on a weekly paycheck and have other dependents,” Dr. Flores said. “It wasn’t uncommon for us to go into the medical record when we were interpreting their exams and see that many of them worked at grocery stores or warehouses.”

The study findings highlight the important role radiologists play in providing earlier identification of higher-risk patients and developing multidisciplinary collaborations to help address these disparities, according to Dr. Flores.

“Health equity is every medical specialty’s responsibility, but I believe radiology is uniquely positioned to take a bigger role not only in population health but in public health efforts,” he said. “Our ability to provide care in different settings is what allowed us to make the clinical observation that patients coming to this one particular clinic and those being admitted to the hospital were presenting with a higher rate of positive findings that were also more severe. That really offered a window into the disparities that were translating into greater disease severity and worse outcomes.”

Moving forward, the findings of this study could assist radiologists in the development of algorithms to identify vulnerable and at-risk populations. This could spur collaborations with other medical specialties, community stakeholders, and public health initiatives to enhance the effectiveness of public health interventions that increase access to care.

“We did this study not only to gain a better understanding of these emerging disparities, but also to discover how we can use this information to craft a better path towards equity together,” Dr. Flores said. 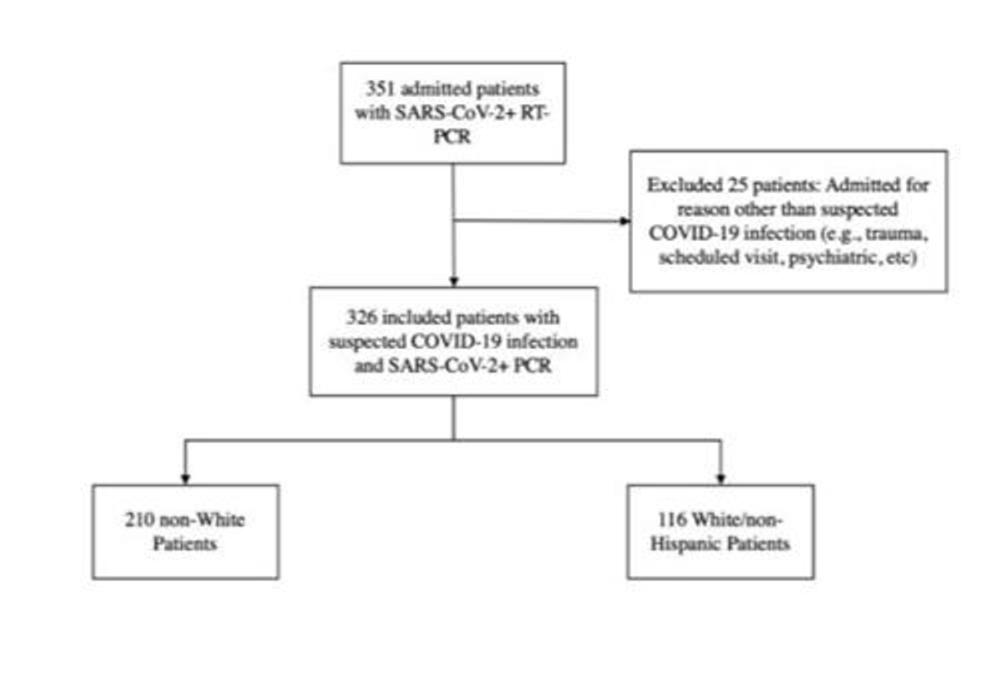 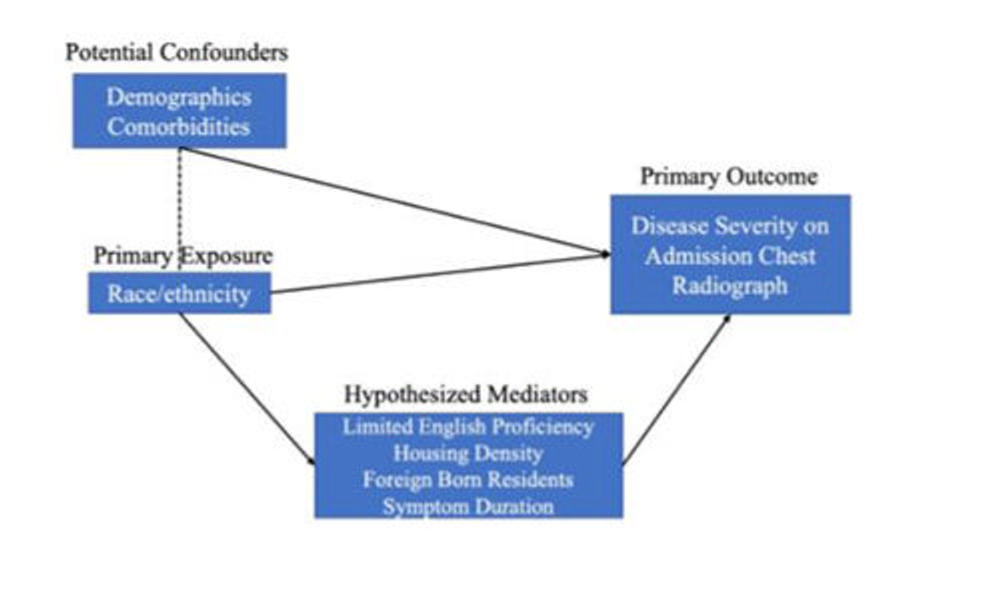 Figure 2. This causal model demonstrates the interpretation of our statistical modeling of our primary exposure and other variables of interest. Namely, that demographic variables and race/ethnicity directly lead to a portion of our observed primary outcome, but race/ethnicity also is hypothesized to potentially interact with variables such as limited English proficiency, housing density, and foreign-born population at zip code level before our primary outcome is observed.
High-res (TIF) version
(Right-click and Save As) 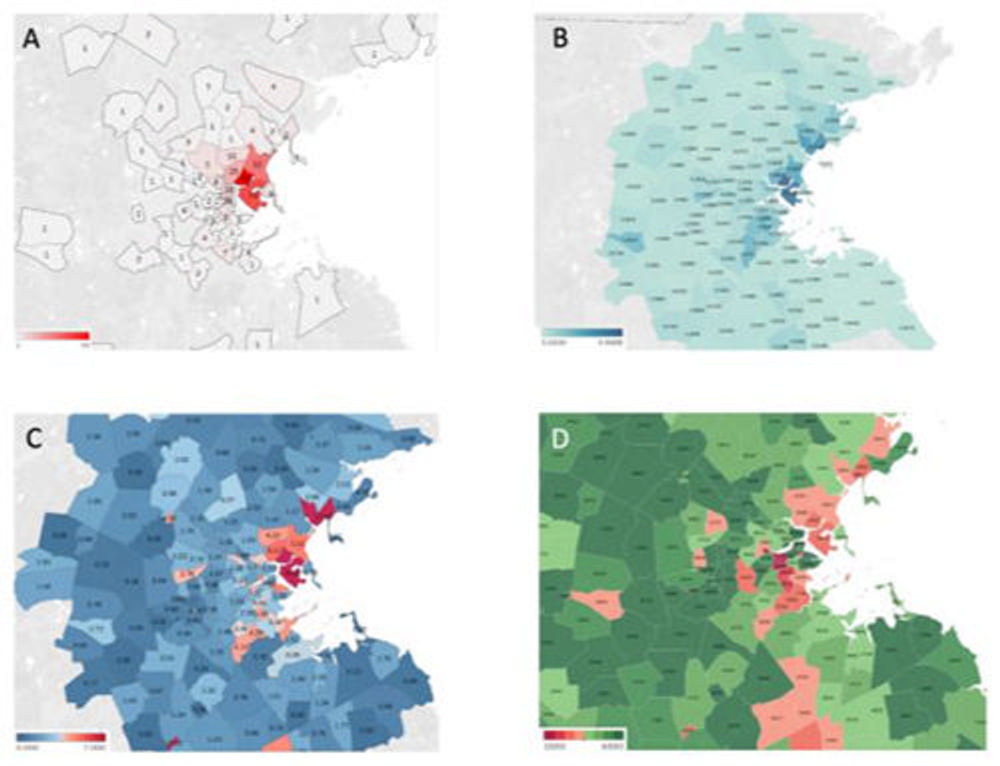 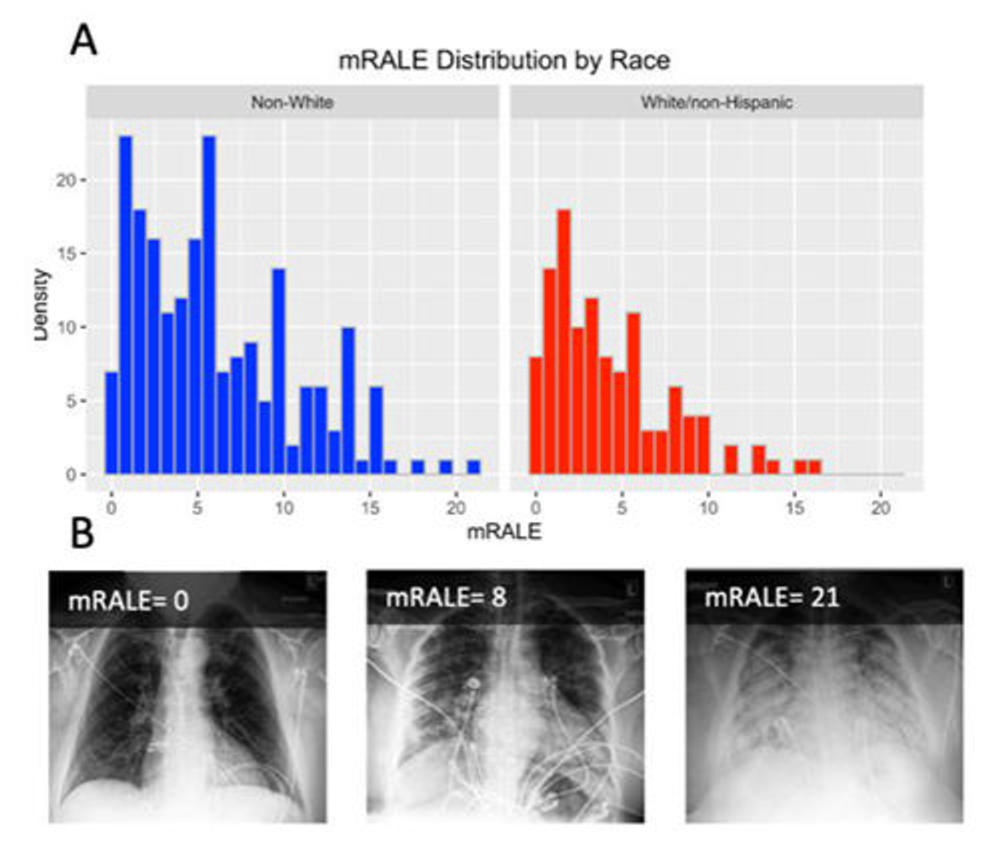 Figure 4. A, Distribution of modified radiographic assessment of lung edema (mRALE) categories on admission chest radiograph by race/ethnicity. Non-White/Hispanic patients were more likely to have higher mRALE score categories compared with White/non-Hispanic patients (Coefficient 0.560, 95% CI 0.046 to 1.074 to, p = 0.033). On average, adjusted for potential confounders, Non-White patients presented with higher mRALE scores on admission chest X-ray compared with White patients (average difference 1.60, 95%CI 0.50 to 2.71, p=0.005) in our multiple variable linear regression analyses. B, Examples of mRALE annotations for pulmonary disease severity in patients with COVID-19. The top left inset number for each image is the corresponding mRALE score, the average of annotations by multiple raters. A score of 0-4 was categorized as mild, 4.1-10 was moderate, and >10 was severe.
High-res (TIF) version
(Right-click and Save As)