OAK BROOK, Ill. — A minimally invasive procedure that destroys cancer cells by freezing them is as effective as surgery for treating early-stage kidney cancer, offering similar 10-year survival rates with a lower rate of complications, according to a study published in the journal Radiology. 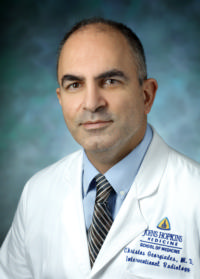 Kidney cancer is among the 10 most common cancers in men and women in the United States. About 70% of cases are found at stage 1, the earliest stage. Treatment typically involves surgical removal of the tumor from the kidney, also known as a partial nephrectomy. Radical nephrectomy, or removal of the entire kidney, is another surgical option.

Percutaneous cryoablation (PCA) has emerged as an alternative to surgery that kills the tumor by freezing it. In the procedure, an interventional radiologist inserts a hollow needle into the tumor under imaging guidance. Argon gas circulating through the needle freezes a small volume of tissue, including the tumor and a small amount of normal tissue around it. The tumor dies, and over time it turns into scar tissue that is absorbed by the body.

“We have been doing cryoablation with increasing frequency at Johns Hopkins,” said study lead author Christos S. Georgiades, M.D., Ph.D., professor of radiology, oncology and surgery from the Department of Vascular and Interventional Radiology at Johns Hopkins University in Baltimore. “It’s an outpatient procedure that takes about 30 to 40 minutes to perform. We observe the patient for three hours, and then they can go home.”

For the study, Dr. Georgiades and colleagues looked at 134 patients who underwent cryoablation for early-stage kidney cancer and compared their outcomes over 10 years with those of patients who had either a radical or partial nephrectomy.

Disease-specific survival—that is, the proportion of patients who were still alive or had died from some other cause besides kidney cancer—was 94% at both five and 10 years after treatment, a figure comparable to that reported after radical or partial nephrectomy. Overall survival probability after percutaneous cryoablation at five and 10 years was longer than for radical or partial nephrectomy.

“For certain patients, cryoablation is equivalent to surgery with fewer side effects,” Dr. Georgiades said. “The risk of significant complications from this procedure is about 6%, compared to between 15 and 20% for surgery. In addition, recovery is much faster than with surgery.”

The study also found that cryoablation was associated with a low 10-year risk of hemodialysis.

Dr. Georgiades emphasized that cryoablation is only appropriate for early-stage kidney cancer that is confined to the kidney and is up to about 4 centimeters in size. It would not be effective in larger tumors. He doesn’t treat patients with cryoablation unless they see a urologist first to get briefed on the surgical option.

“If a patient is interested in hearing about cryoablation, I’ll explain the risks, benefits and outcomes,” Dr. Georgiades said. “At Johns Hopkins, we give patients all the options and, in the end, they make the final decision. I only offer cryoablation if I know it’s going to be beneficial to the patient.”

As of now, the standard of care for early-stage kidney cancer is partial nephrectomy. However, the study results from Johns Hopkins, along with results from other studies, are likely to be considered by medical societies as they update their guidelines.

“Studies like this may convince societies to make cryoablation the go-to option, at least for early-stage kidney cancer,” Dr. Georgiades said. 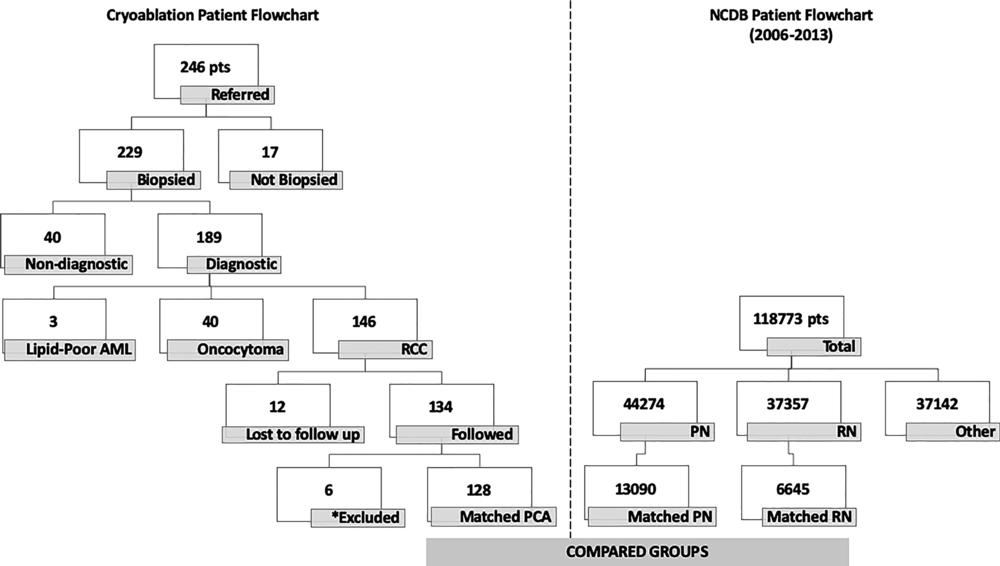 Figure 1. Image shows patient inclusion flowchart. Among initial 246 patients (pts) with stage I renal cell carcinoma (RCC) referred from urology for percutaneous cryoablation (PCA), 134 were eventually included in our study (left). From National Cancer Database (NCDB) (right), among total 118,773 patients with stage I RCC treated between 2006 and 2013, 44,274 (37%) were treated with partial nephrectomy (PN), 37,357 (32%) were treated with radical nephrectomy (RN), and 37,142 (31%) were treated otherwise (percutaneous, laparoscopic, or open ablation). After matching, three comparison groups were PCA (128 patients), PN (13,090 patients), and RN (6,645 patients). ⁎ = Among 134 study patients, five were excluded because they were treated before 2006 and one due to lack of Charlson/Deyo Combined Comorbidity score. AML = angiomyolipoma.
High-res (TIF) version
(Right-click and Save As) 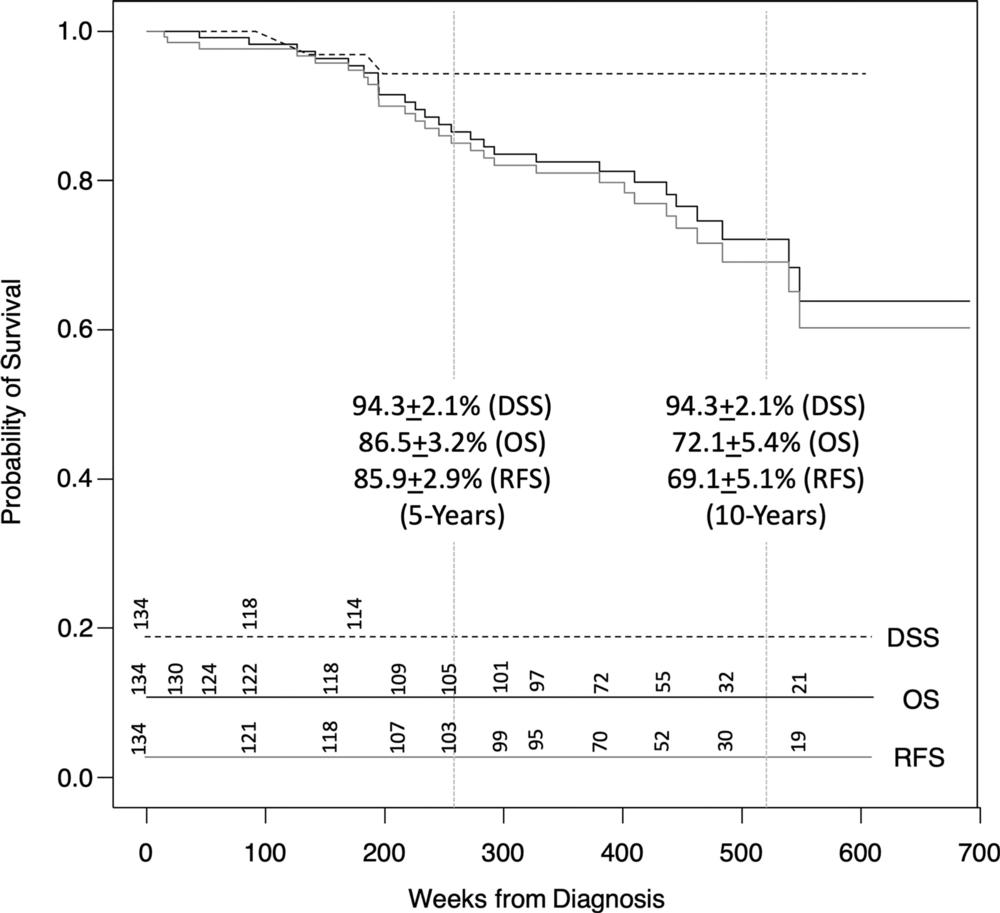 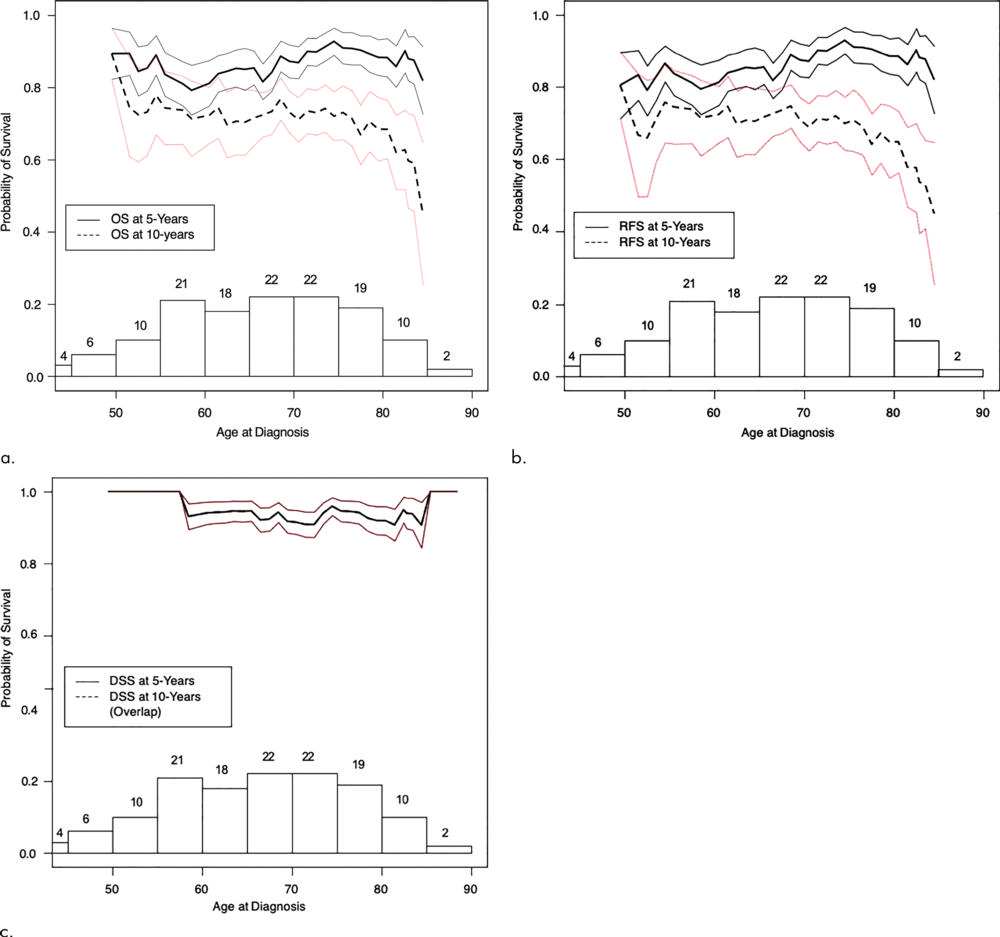 Figure 3. Plots show 5-year (solid lines) and 10-year (dashed lines) (a) overall survival (OS), (b) recurrence-free survival (RFS), and (c) disease-specific survival (DSS) probabilities by age at diagnosis of all 134 patients in percutaneous cryoablation group. Whereas 5-year curves are relatively stable, 10-year curves dip with advancing age, notably above 80 years. This suggests cryoablation is beneficial at any age, provided life expectancy of octogenarians is at least 5 years. (Number above bars are number of patients used in calculation for that age range. Bracket curves represent standard error).
High-res (TIF) version
(Right-click and Save As) 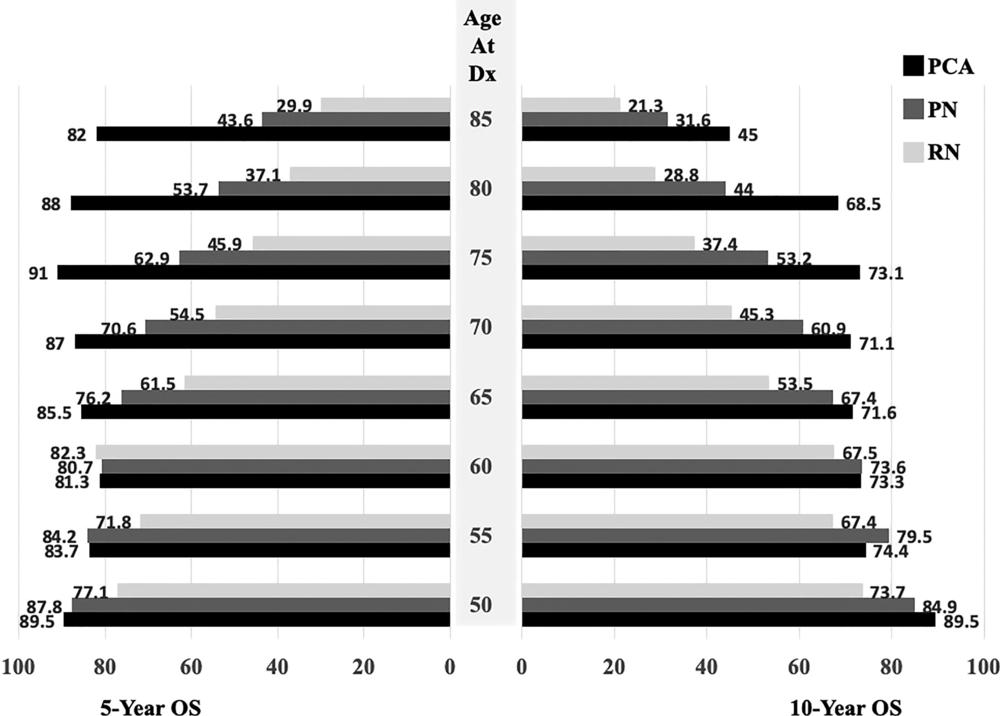