OAK BROOK, Ill. — Medical radiation exposure to patients in the U.S. fell by 20% between 2006 and 2016, reversing a quarter century-long trend of increasing exposure, according to a study appearing in the journal Radiology.

The use of medical imaging has grown rapidly in recent decades, raising concerns about the exposure of patients to ionizing radiation. A landmark report published in 2008 found that per capita radiation exposure in the U.S. increased six-fold between 1980 and 2006.

“The radiation dose to the U.S. population went up dramatically because of medical exposure, mostly from CT scanning and nuclear medicine, and that woke everybody up to the problem,” said study senior author Fred A. Mettler Jr., M.D., radiologist from the Department of Radiology at the University of New Mexico in Albuquerque.

In the wake of the report, medical societies and organizations enacted initiatives to increase awareness of exposure while equipment manufacturers developed more refined dose modulation technology. The effects of these and other efforts in the years since 2006 have remained largely unknown. 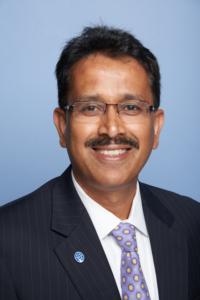 Armed with a grant from the Centers for Disease Control and Prevention, Dr. Mettler assembled a group of experts in medical imaging and physics and set out to determine the change in per capita radiation exposure in the U.S. from 2006 to 2016.

The results showed that the number of diagnostic and interventional radiology examinations performed remained largely unchanged over the 10-year period, even though the U.S. population increased by about 23 million. Estimated annual individual dose from diagnostic and interventional medical procedures fell from 2.9 millisieverts (mSv) in 2006 to 2.3 mSv in 2016, a decrease of approximately 20%.

“The overall trend stabilized, and the total dose to the U.S. population dropped a bit,” Dr. Mettler said.

A key factor in the reduction was a substantial decrease in the number of nuclear medicine procedures, from 17 million in 2006 to 13.5 million in 2016. The decline was particularly notable in cardiology after a cut in Medicare reimbursement drove many cardiologists away from nuclear medicine-based procedures to stress echocardiography, a test that relies on ultrasound instead of ionizing radiation.

“Nuclear medicine basically fell off a cliff, possibly due to cardiologists discovering that reimbursement was way down and that, for cardiac ischemia and other indications, stress echocardiography is essentially as accurate as the nuclear medicine procedures,” Dr. Mettler said.

CT scans, a major driver of medical radiation exposure, increased from 67 million to 84 million scans over the 10-year period. However, the average individual effective dose from CT procedures dropped by 6%, thanks to several factors, according to study co-author Mahadevappa Mahesh, M.S., Ph.D., professor of radiology and cardiology at Johns Hopkins University School of Medicine in Baltimore.

“One important factor is the dose modulation techniques available on most CT scanners in the country,” he said. “The second factor is that overall CT detectors are becoming very efficient in the sense that they can utilize less radiation to create the same quality images.”

Dr. Mahesh also credited campaigns such as Image Wisely, a joint effort of the Radiological Society of North America, the American College of Radiology, American Society of Radiologic Technologists and American Association of Physicists in Medicine, aimed at optimizing dose and reducing unnecessary imaging examinations in the adult population, and Image Gently, which does the same in the pediatric population. He also pointed to accreditation requirements that are contributing towards dose stabilization.

Now that U.S. medical radiation exposure levels appear to have stabilized, the researchers stressed the importance of sustained vigilance to keep the trend from reversing.

“We don’t want people to become complacent,” Dr. Mahesh said. “Things are generally going in a good direction, but we need to continue on that path.”

Dr. Mahesh and colleagues plan to publish a report next year on trends in medical radiation exposure worldwide. 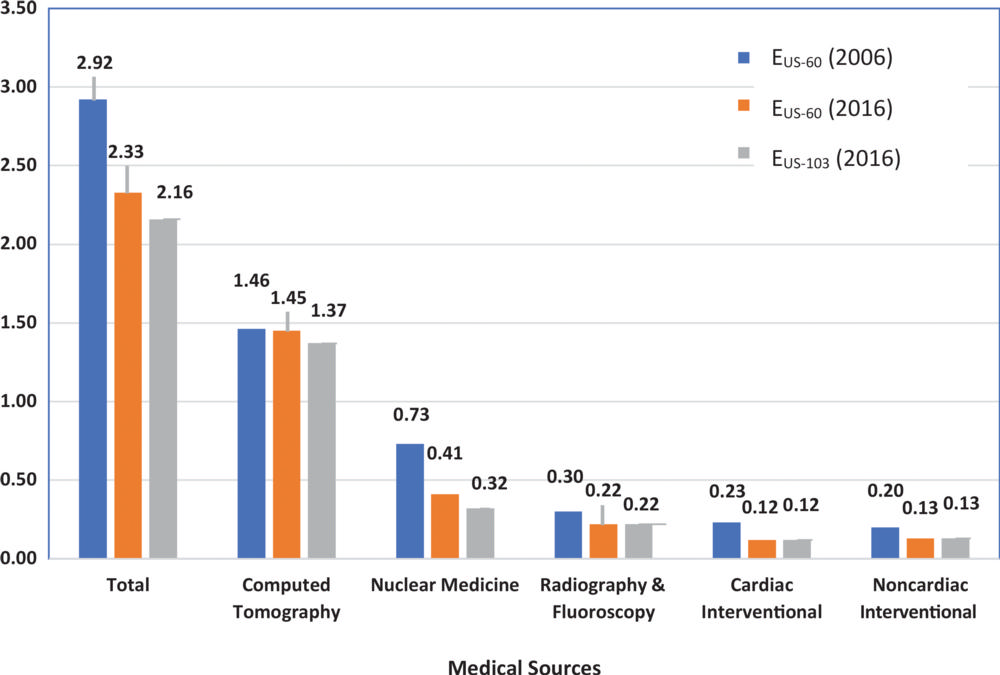 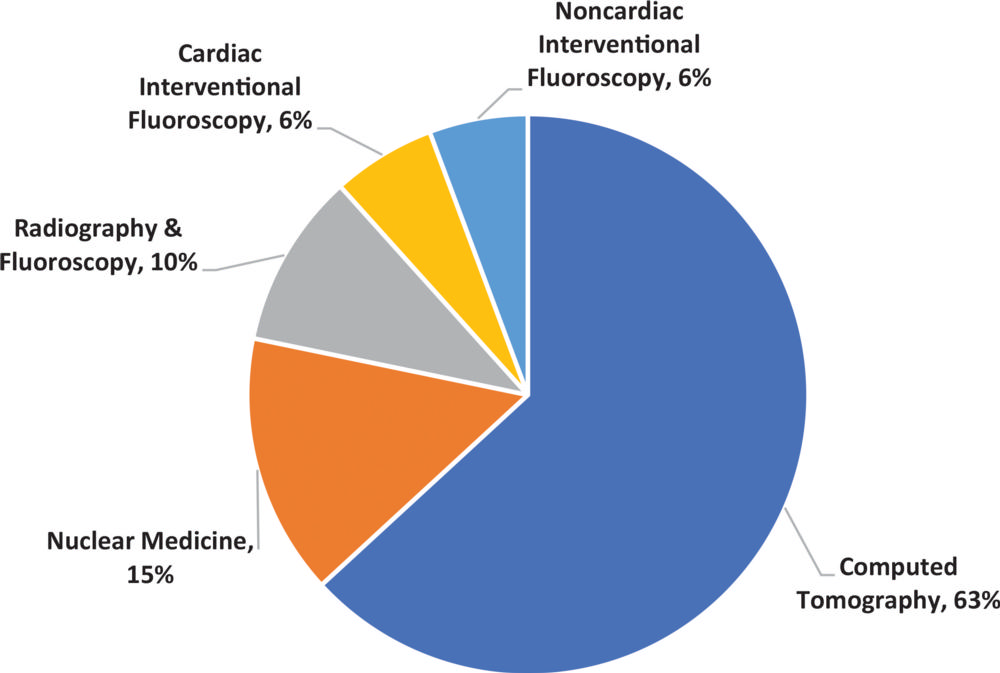 Figure 2. Chart shows percentage of collective effective dose (717,000 person-sievert in the United States from different modalities for 2016. Collective effective doses were obtained by using tissue-weighting factors from International Commission on Radiological Protection Publication 103 (9). Adapted with permission of the National Council on Radiation Protection and Measurements.
High-res (TIF) version
(Right-click and Save As) 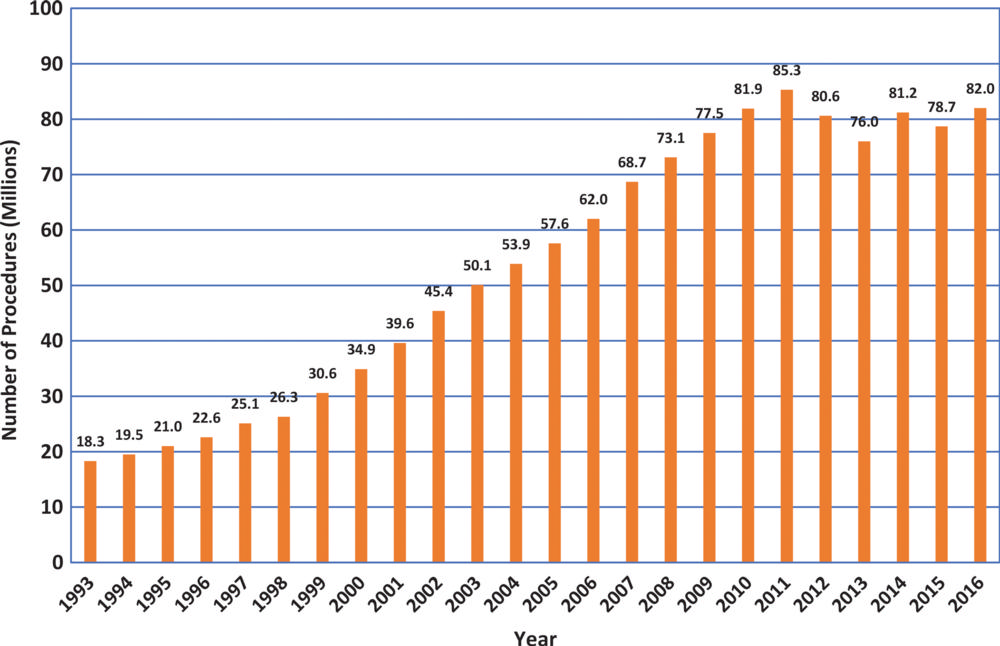 Figure 3. Bar graph shows total CT procedure volume trend data reported by IMV Medical Information Division in the United States from 1993 to 2016 (IMV 2017 CT Benchmark Survey). This provides general temporal trend information. The sudden drop from 2011 to 2012 is partially due to the Centers for Medicare and Medicaid Services’ bundling of certain procedures, including abdomen and pelvis. (Note: These values are slightly different from those estimated in National Council on Radiation Protection and Measurements [NCRP] Report 184 as these IMV values do not include PET/CT, SPECT/ CT, or multiple scans within a single procedure or adjustments made for possible overestimation of certain types of procedures.) Adapted with permission of the NCRP.
High-res (TIF) version
(Right-click and Save As) 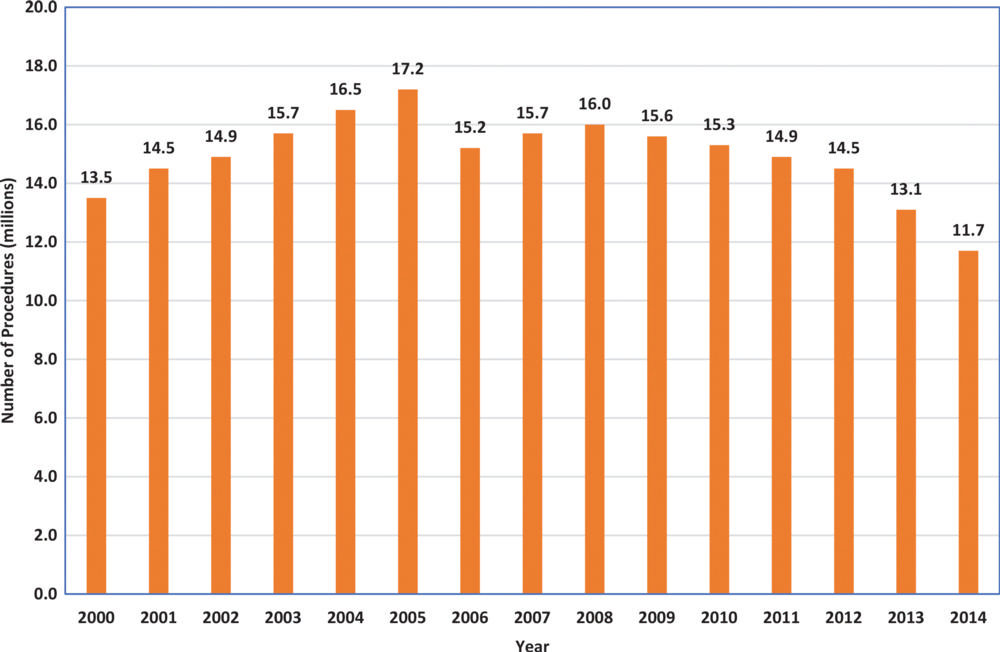 Figure 4. Bar graph shows IMV Medical Information Division estimates of trend data for total nuclear medicine procedures (non-PET) according to year (IMV 2015 [15]). Estimates for 2016 were a total of 13.5 million procedures, of which about 1.9 million were clinical PET procedures. Adapted with permission of the National Council on Radiation Protection and Measurements.
High-res (TIF) version
(Right-click and Save As)