OAK BROOK, Ill. — Bariatric surgery and weight loss appear to reverse some of the negative effects of obesity on the respiratory system, according to a study published in the journal Radiology. 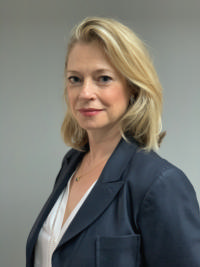 Obesity is a public health epidemic that contributes to a higher risk of hypertension and stroke, diabetes and certain cancers. It also harms the respiratory system, although the scope of these effects is not fully understood.

Known effects of obesity on the respiratory system include increased respiratory work, along with compromised airway resistance and respiratory muscle strength, which may all contribute to restrictive pulmonary function impairment.

As an imaging technology that provides detailed pictures of the lungs and airways, CT has great potential to improve understanding of obesity's impact on the respiratory system. Up until now, however, there have been few CT studies evaluating obesity's effects on the lungs and the trachea, often referred to as the windpipe.

"This caused me to wonder if these differences were due to obesity and whether they were reversible after weight loss," she said.

For the study, Dr. Copley and her colleagues evaluated changes in the respiratory systems of 51 obese individuals who underwent bariatric surgery, a treatment for obese patients who haven't responded to other weight loss approaches. The procedure reduces the size of the stomach. All participants lost weight post-surgery with a mean body mass index decrease of 10.5 kg/m2.

The researchers used CT to measure the size and shape of the trachea and assess air trapping, a phenomenon in which excess air remains in the lungs after exhaling, resulting in a reduction in lung function. Air trapping is an indirect sign of obstruction in the small airways of the lung.

When the researchers compared results at baseline and six months after bariatric surgery, they found that surgery and weight loss were associated with morphological, or structural, changes to the lung and trachea.

Post-surgery CT showed reductions in air trapping and a lower incidence of tracheal collapse. Change in the extent of CT air trapping was the strongest predictor of improvement in dyspnea, or shortness of breath.

"For the first time, this study has demonstrated changes in the CT morphology of large and small airways that improve when individuals lose weight," Dr. Copley said. "These features correlate with an improvement in patient symptoms."

While more studies are needed to better understand the link between CT features and biomarkers of inflammation, the study underscores CT's potential in the work-up of patients with obesity.

"CT is a useful morphological marker to demonstrate subtle changes which are not easily assessed by lung function alone," Dr. Copley said. 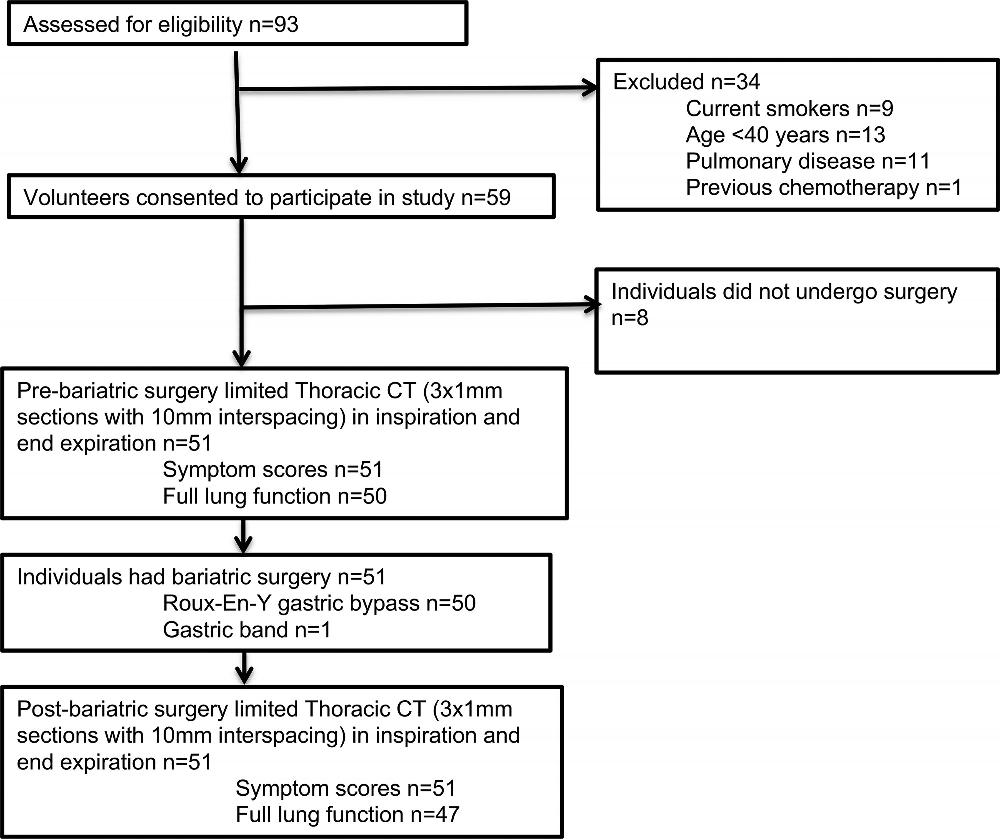 Figure 1. Flowchart of participant selection for the study.
High-res (TIF) version
(Right-click and Save As)

Figure 2. Axial unenhanced inspiratory CT images of the lungs in 51-year-old woman (a) before and (b) 6 months after bariatric surgery with 31-kg weight loss (body mass index decrease, 36.1%). The mosaic attenuation seen before surgery resolved after surgery.
High-res (TIF) version
(Right-click and Save As)

Figure 3. Axial unenhanced end-expiratory CT images of the lungs in the same 51-year-old woman as in Figure 2 (a) before and (b) 6 months after bariatric surgery with a 31-kg weight loss (body mass index decrease, 31.6%) show air trapping before surgery that resolves after surgery. Note the variation in the anatomic position of the sections before and after surgery owing to differences in diaphragmatic excursion and the effect on the lung parenchyma with increased extrapulmonary restriction due to obesity.
High-res (TIF) version
(Right-click and Save As) 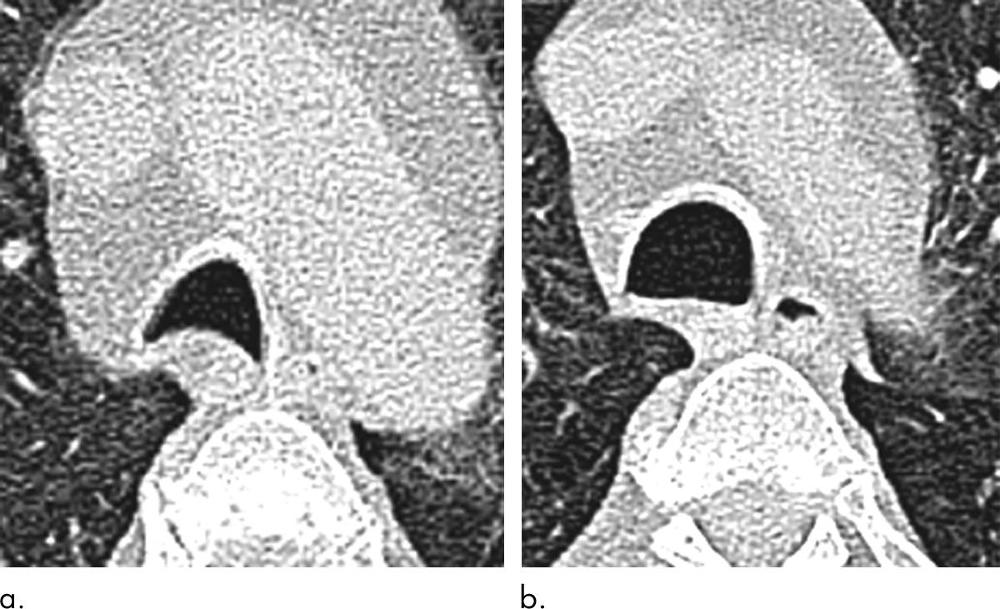 Figure 4. Axial unenhanced end-expiratory CT images of the trachea in 54-year-old man (a) before and (b) 6 months after bariatric surgery with 46-kg weight loss (body mass index decrease, 28.0%). Tracheal cross-sectional area increased from 241 mm2 before surgery to 339 mm2 after. Tracheal shape changed from moderate anterior bowing of the posterior tracheal membrane (grade 3) before surgery to flattening of the posterior tracheal membrane (grade 1) after surgery.
High-res (TIF) version
(Right-click and Save As) 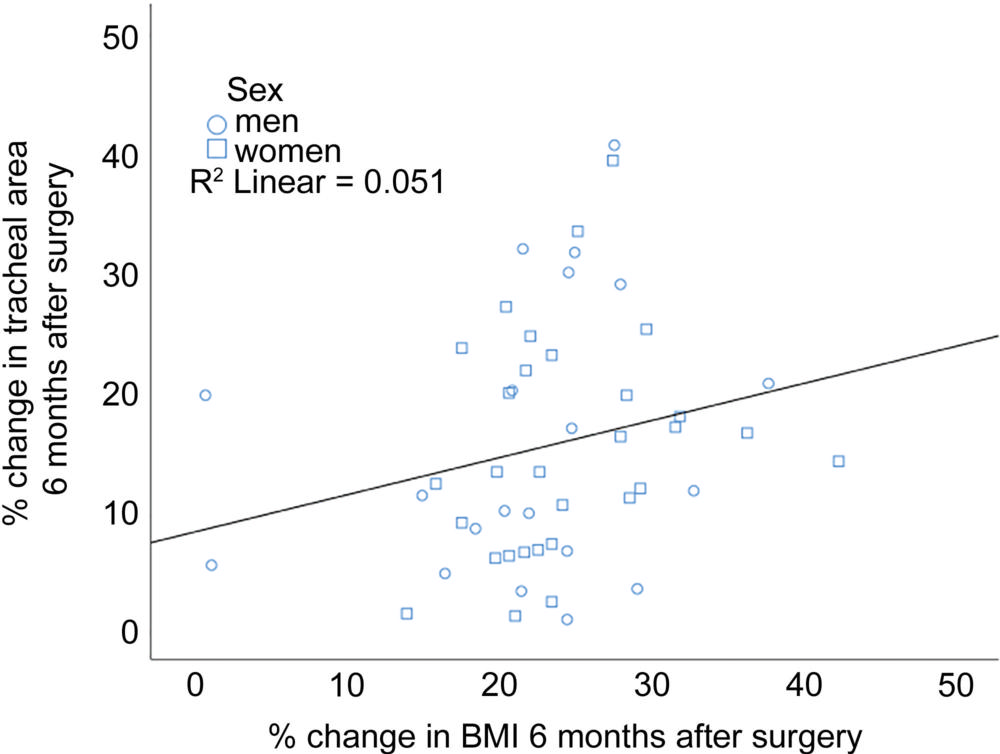 Figure 5. Scatterplot of percentage change in tracheal area (in mm2) 6 months after surgery with percentage change in body mass index (in kg/m2) for men and women (rS [Spearman rank correlation coefficient] = 0.32, P = .02, R2 [coefficient of determination] = 0.051).
High-res (TIF) version
(Right-click and Save As)