Some Pregnant Women Are Exposed to Gadolinium in Early Pregnancy

OAK BROOK, Ill. — A small but concerning number of women are exposed to a commonly used MRI contrast agent early in their pregnancy, likely before many of them are aware that they’re pregnant, according to a study published in the journal Radiology. The results support adherence to effective pregnancy screening measures to help reduce inadvertent exposures to these contrast agents during early pregnancy.

Gadolinium-based contrast agents (GBCAs) are used in as many as 45 percent of MRI exams in the United States to improve the visualization of organs and tissue. Recent evidence shows that trace levels of gadolinium may be retained in the body after the MRI, although the implications of this are not yet understood.

Gadolinium can cross the placenta and enter the fetal circulation. The safety of GBCAs in pregnant women has not been established, and their use during pregnancy is not recommended unless essential to the health of the woman or fetus. Available data from cohort studies and case reports have revealed inconsistent findings regarding the association between gadolinium and adverse fetal outcomes.

To obtain a more precise idea of the prevalence of GBCA exposure among pregnant women, study lead author Steven Bird, Pharm.D., Ph.D., of the U.S. Food and Drug Administration’s (FDA) Division of Epidemiology, and colleagues analyzed data on U.S. pregnancies resulting in live births between 2006 and 2017. The data was collected from 16 partners of the FDA’s Sentinel System, a program that allows for active surveillance of healthcare data from multiple sources to monitor the safety of regulated medical products.

The data revealed exposures to GBCAs in 5,457 of 4,692,744 live births, a number corresponding to one in 860 pregnancies. Most of the exposures came from contrast MRI examinations of the head, although the number of pelvic and abdominal MRIs were also noteworthy. Almost three-quarters of exposures occurred during the first trimester. The results strongly suggested that inadvertent exposure to GBCAs may occur before pregnancy is recognized.

The FDA has advised all MRI centers to provide a medication guide to outpatients during their first gadolinium contrast administration, stating that pregnant women and young children may be at increased risk from gadolinium staying in the body.

The researchers suggested several ways radiology imaging centers might avoid inadvertent administration of GBCAs to pregnant women. Among the tools are a safety screening form asking about the potential for pregnancy, direct questioning of women by radiologic technologists regarding pregnancy, prominently displayed signs asking women to notify radiology staff if they may be pregnant, and pregnancy testing when appropriate.

The FDA is continuing to monitor reports of adverse events associated with gadolinium exposure in utero. While this study was not designed to assess health outcomes of this early exposure for women and/or infants, the FDA is collaborating on and funding a study to evaluate potential risk for stillbirth and other neonatal adverse effects following in utero exposure to gadolinium in a large group of pregnant Medicaid beneficiaries.

For patient-friendly information on MRI safety during pregnancy, visit RadiologyInfo.org. 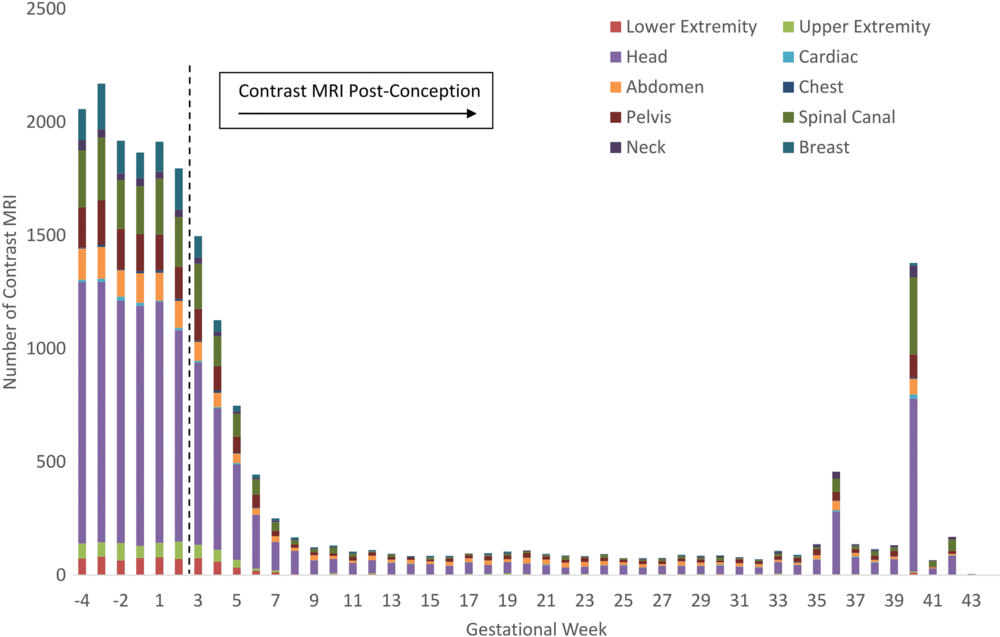 Figure 1. Number of contrast MRI exposures and anatomic location of imaging by gestational week. Dotted line represents date of conception, defined as the date of the last menstrual period + 14 days. 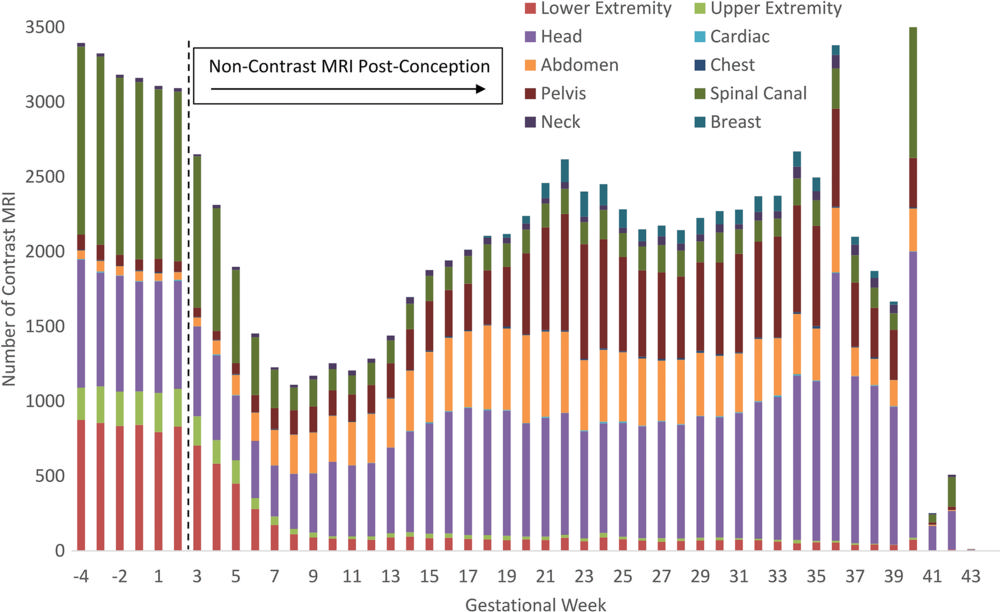