OAK BROOK, Ill. – MRI-based measurements of the functional connections in the brain can help predict long-term recovery in patients who suffer neurological disability after cardiac arrest, according to a study appearing online in the journal Radiology. 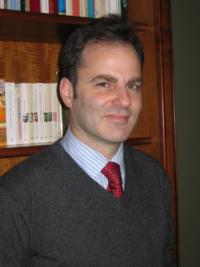 Cardiac arrest, or abrupt loss in heart function, is a common and often deadly occurrence that affects hundreds of thousands of people every year in the United States alone, according to the American Heart Association. Many patients who survive end up with severe neurological disabilities, as the temporary loss of oxygenated blood flow to the brain can result in widespread neuronal cell death.

For the study, Dr. Stevens and colleagues used advanced MRI techniques like diffusion tensor imaging and resting-state functional MRI (fMRI) to focus on the brain’s large-scale functional integration. This “network of networks,” or connectome, represents the ensemble of different neuronal populations in the brain that work together to perform tasks.

The researchers assessed the brain’s functional connectivity in 46 patients who were in a coma following cardiac arrest. The imaging, performed within two weeks of cardiac arrest, included studies of brain structure and function. Functional imaging focused on four well-characterized networks in the brain, including the default mode network, which is active when a person is not engaged in a specific task, and the salience network, a collection of brain regions that select which stimuli are deserving of our attention.

One year after the patients’ cardiac arrests, the researchers assessed the patients with the Cerebral Performance Category Scale, a commonly used measure of neurological function following cardiac arrest. Eleven patients had favorable outcomes. Functional connectivity was stronger in those who achieved higher levels of independence at one year compared with those who were heavily dependent. The changes in functional connectivity between networks predicted outcomes with greater accuracy than any of the MRI structural measures tested.

“This is game-changing information about what happens in the brains of people who suffer cardiac arrest,” Dr. Stevens said. “We realize that network architectures can be selectively disrupted in this setting.”

A key predictor of outcomes was the interaction between the brain’s default mode and salience networks. These two networks are normally anti-correlated, meaning that as the default mode network becomes more active, activity is reduced in the salience network, and vice versa. When researchers compared the brain imaging results of patients who had favorable outcomes with those who did not, they noticed a stark difference.

The results indicate that connectivity measures could be early markers of long-term recovery potential in patients with cardiac arrest-related brain damage, the researchers said.

While researchers don’t expect connectome analysis with MRI to be the single “magic bullet” solution to predicting outcomes, it could increase the confidence that clinicians have in communicating with patients’ families in the wake of cardiac arrest. Additionally, fMRI could aid in the development of therapeutic interventions for neurologically disabled patients.

“Connectome studies have the potential to change not only outcome prediction, but to guide treatment as well,” Dr. Stevens said. 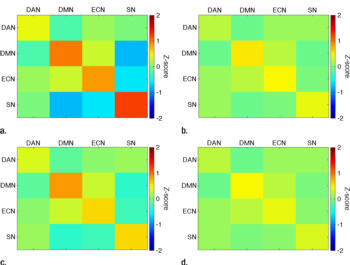 Figure 2. This figure displays the strength of functional MRI connectivity within and between networks of the brain. Warmer colors (yellow-orange-red) indicate positive correlations, colder colors (shades of blue) indicate negative correlations, and green indicates absence of correlation. The connectivity seen in healthy controls (a) is reduced in cardiac arrest patients (b), and this reduction is more pronounced in cardiac arrest patients who had a poor functional outcome (d) when compared to those who had a poor functional outcome (c). Acronyms denote individual networks (DAN=dorsal attention network. DMN=default mode network. ECN=executive control network. SN=salience network). 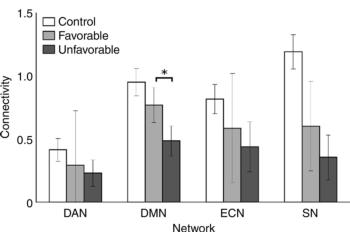 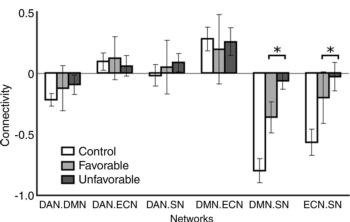 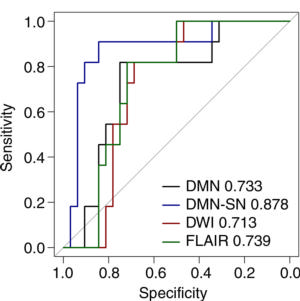 Figure 5. The family of curves shown here contrasts the ability of different MRI-based functional and structural variables to predict one year functional outcome. The area under the curves is a measure of the discriminative ability of each variable. Here, it is shown that the inverse correlation between the salience network and the default mode network (DMN-SN) is the strongest predictor, better than the internal connectivity of the default mode network, better also than the signal changes detected using structural MRI (FLAIR, DWI).