OAK BROOK, Ill. — Changes in the visual systems of newly diagnosed Parkinson’s disease patients may provide important biomarkers for the early detection and monitoring of the disease, according to a new study published online in the journal Radiology. 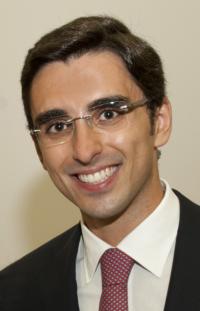 “Just as the eye is a window into the body, the visual system is a window into brain disorders,” said lead researcher Alessandro Arrigo, M.D., a resident in ophthalmology at the University Vita-Salute San Raffaele of Milan, Italy.

“Although Parkinson’s disease is primarily considered a motor disorder, several studies have shown non-motor symptoms are common across all stages of the disease,” Dr. Arrigo said. “However, these symptoms are often undiagnosed because patients are unaware of the link to the disease and, as a result, they may be under-treated.”

Non-motor symptoms experienced by patients with Parkinson’s disease include visual alterations such as an inability to perceive colors, a change in visual acuity, and a decrease in blinking which can lead to dry eye.

“These non-motor Parkinson’s symptoms may precede the appearance of motor signs by more than a decade,” Dr. Arrigo said.

The study of 20 newly diagnosed and not yet treated patients (11 men, 9 women) with Parkinson’s disease and 20 age- and gender-matched healthy controls involved a multi-disciplinary team of researchers in ophthalmology, neurology and neuroradiology of the University of Messina, Italy. MRI was performed on both the healthy controls and the patients, who underwent imaging within four weeks of their diagnosis. Researchers used an MRI technique called diffusion weighted imaging to assess white matter changes and voxel-based morphometry (VBM) to investigate concentration changes of brain’s gray and white matter. All study participants also had ophthalmologic examinations.

The researchers found significant abnormalities within the visual system brain structures of Parkinson’s disease patients, including alterations of optic radiations, a reduction of white matter concentration and a reduction of optic chiasm volume. The optic chiasm is the part of the brain where the left and right optic nerves intersect.

Dr. Arrigo added that future studies are needed to better understand the timing of degeneration along visual pathways, as well as the specific changes.

“We’re excited by our findings,” he said. “However, this is just a starting point.” 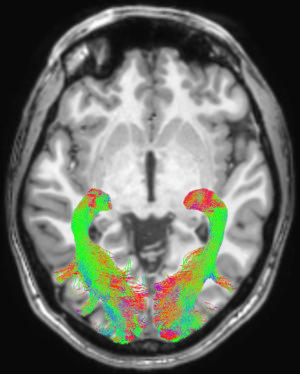 Figure 1. Left and right optic radiation (OR) image in a representative subject overlaid onto a T1-weighted axial volume image of the same subject. OR images were obtained on the basis of diffusion-weighted volume images by means of constrained spherical deconvolution fitting and related tractography. Each bundle was automatically colored according to tract main directionality: red for left to right, green for anterior to posterior, and blue for inferior to superior. 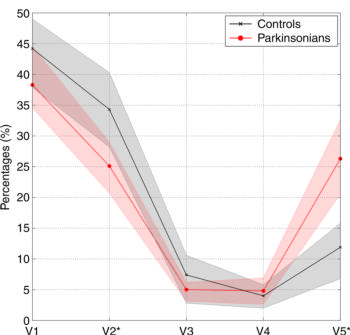 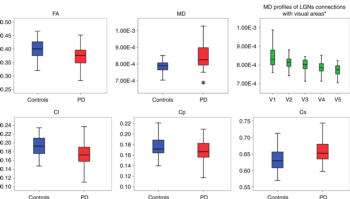 Figure 4. Series of axial section images show T1-weighted imaging–based voxel-based morphometry analysis of occipital cortex. Statistically significant reduction in clusters of gray matter concentration in Parkinson disease group compared with that in control subjects is shown. Only clusters comprising at least five suprathreshold voxels and involving at least one visual area were included in the analysis and are shown in the figure. To help visualization, shaded blue circles were added to highlight all clusters. 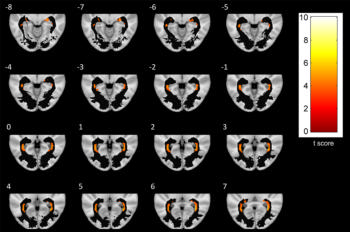 Figure 5. A series of axial-section images show white matter (WM) voxel-based morphometry analysis of posterior WM regions. Statistically significant reduction in clusters of WM concentration is shown in patients with Parkinson disease. Only clusters comprising at least five suprathreshold voxels and involving optic radiation (OR) were included in analysis and are shown in the figure. To help visualization, OR mask was visualized as a black region of interest. 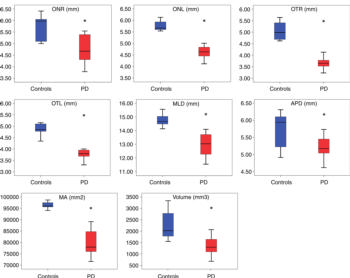