OAK BROOK, Ill. Minute traces of gadolinium, the contrast agent used to enhance MR images, are often retained in the brain tissue of patients years after undergoing MRI. Some studies have suggested this deposition was limited to patients with underlying brain pathology, such as a tumor or infection. However, new research suggests gadolinium retention may be more widespread and may be present in many more, or possibly all, patients exposed to gadolinium-based contrast agents, according to new research published online in the journal Radiology. 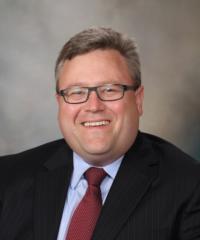 Gadolinium contrast media were introduced as a means of enhancing MRI images in 1988 and are commonly used today. The contrast agent is injected into the patient’s bloodstream and eliminated from the body through the kidneys.

The study involved an analysis of post-mortem neuronal tissue samples from five patients who had undergone four or more (up to 18) gadolinium-enhanced MRI exams between 2005 and 2015 and 10 patients who had undergone MRI exams without gadolinium. The median age at the time of death was 68 years in the contrast agent-exposed group and 79 years in the control group. All patients in the current study were exposed to gadodiamide (Omniscan).

During the patient autopsies, a small amount of brain tissue was obtained from each patient and studied with transmission electron microscopy, mass spectroscopy and X-ray spectroscopy. The analysis revealed dose-dependent gadolinium deposits in four neuroanatomical regions of the brain in patients who underwent contrast-enhanced MRI. At the time of autopsy, all study patients had normal brain pathology.

“Our results suggest current thinking with regard to the permeability of the blood brain barrier is greatly oversimplified, as gadolinium appears to accumulate even among patients with normal brain tissue and no history of intracranial pathology.” Dr. McDonald said. “It will take additional research to understand how and why this deposition is occurring.”

The analysis revealed that certain areas of the brain, including the globus pallidus and dentate nucleus, retained more of the gadolinium agent.

“These neuroanatomical regions of the brain are also areas prone to mineralization and hemorrhage, which may suggest that parts of the brain may have a less robust barrier and may be more susceptible to this deposition,” Dr. McDonald said.

Because free gadolinium is similar to calcium in size and charge, Dr. McDonald said the body may also mistake the contrast media for this endogenous metal, which is often taken up in areas of the brain during the aging process.

“These are all questions that need to be further explored,” he noted.

Despite finding evidence of gadolinium contrast agent deposition in the neural tissues, the researchers detected no histologic changes to suggest toxicity. The FDA has identified no convincing scientific evidence to date that these deposits are harmful, but is further investigating this matter.

“Gadolinium-based contrast agents have revolutionized MRI and diagnostic medicine,” Dr. McDonald said. “They have allowed us to detect diseases that would otherwise be extremely difficult to diagnose.” 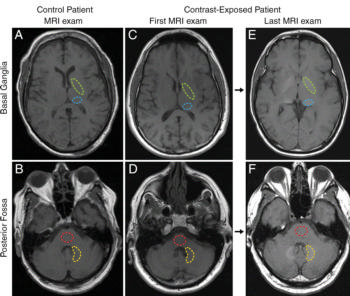 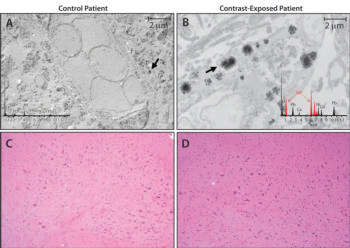 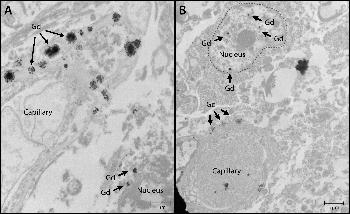