OAK BROOK, Ill. — Machine learning is a type of artificial intelligence that allows computer programs to learn when exposed to new data without being programmed. Now, researchers in The Netherlands have coupled machine learning methods with a special MRI technique that measures the perfusion, or tissue absorption rate, of blood throughout the brain to detect early forms of dementia, such as mild cognitive impairment (MCI), Radiology.

Scientists have long known that Alzheimer's disease is a gradual process and that the brain undergoes functional changes before the structural changes associated with the disease show up on imaging results. Physicians have no definitive way of identifying who has early dementia or which cases of mild cognitive impairment will progress to Alzheimer's disease.

"With standard diagnostic MRI, we can see advanced Alzheimer's disease, such as atrophy of the hippocampus," Dr. Meije Wink said. "But at that point, the brain tissue is gone and there's no way to restore it. It would be helpful to detect and diagnose the disease before it's too late."

For the new study, the researchers applied machine learning methods to special type of MRI called arterial spin labeling (ASL) imaging. ASL MRI is used to create images called perfusion maps, which show how much blood is delivered to various regions of the brain.

The automated machine learning program is taught to recognize patterns in these maps to distinguish among patients with varying levels of cognitive impairment and predict the stage of Alzheimer's disease in new (unseen) cases.

The study included 260 of 311 participants from the Alzheimer Center of the VU University Medical Center dementia cohort who underwent ASL MRI between October 2010 and November 2012.

SCD and MCI are considered to be early stages of the dementia process and are diagnosed based on the severity of cognitive symptoms, including memory loss and thought- and decision-making problems.

The automated system was able to distinguish effectively among participants with Alzheimer's disease, MCI and SCD. Using classifiers based on the automated machine learning training, the researchers were then able to predict the Alzheimer's diagnosis or progression of single patients with a high degree of accuracy, ranging from 82 percent to 90 percent.

He added that the application of automated machine learning methods would be useful as a potential screening tool.

"ASL MRI can identify brain changes that appear early in disease process, when there's a window of opportunity for intervention," Dr. Meije Wink said. "If the disease process from SCD to MCI to Alzheimer's disease could be intercepted or slowed, this technique could play a role in screening." 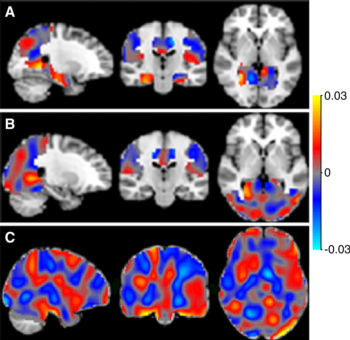 Figure 1. The classifiers can be represented as discrimination maps, where a red color indicates that the intensity at that location contributes to the likelihood of the images belonging to the more advanced stage, and a blue color to the likelihood of belonging to the less advanced stage. Weights are shown inside the mask that resulted in the highest accuracies for each classification: A: Alzheimer's disease (AD) vs. subjective cognitive decline (SCD); B: AD vs. mild cognitive impairment (MCI); C: MCI vs. SCD. 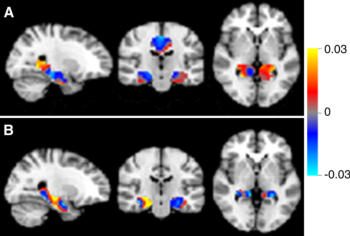