OAK BROOK, Ill. — Fatty acids in the breast may be useful indicators of cancer in postmenopausal women, according to a new study published online in the journal Radiology. The results may help researchers determine the underlying mechanisms behind breast cancer development in some patients.

The role of fat in breast cancer development and growth has been studied extensively using body mass index (BMI) and dietary fat intake.

The exact mechanism behind the increased risk in postmenopausal women with higher BMI is not fully understood. One possibility is the increased production of estrogen and/or adipokines, which are cell-signaling proteins secreted by adipose, or fat, tissue, but there have been few studies specifically looking at the role of breast fat in cancer development.

"Using a new method, we were able to directly measure the tissue where breast cancer begins in the hopes of understanding how fatty tissue correlates with cancer," said Melanie Freed, Ph.D., lead researcher of the study.

Eighty-nine patients were included in the final analysis. Each patient's height and weight was measured at the time of the exam and their BMI was calculated. Fifty-eight women were premenopausal and 31 were postmenopausal. Breast cancer status was determined by a review of the patients' electronic medical record including any follow up procedures. Forty-nine patients had benign breast tissue, 12 had ductal carcinoma in situ, and 28 had invasive ductal carcinoma.

Research showed no correlation between BMI and fatty acid fractions in breast tissue, suggesting that the type of fat that makes up fatty breast tissue gives new information beyond the amount of overall body fat.

"Our research is ongoing," Dr. Kim said. "We need to investigate these higher levels of saturated fat and their direct correlation with tissue estrogen levels and cancer development. The results may point to a new risk factor for breast cancer." 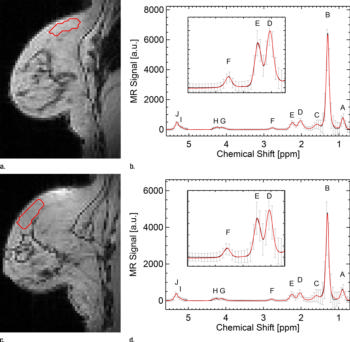 Figure 1. Example analysis for two patient cases: (a, b) a 62-year-old postmenopausal woman with a benign lesion and (c, d) a 67-year-old postmenopausal woman with invasive ductal carcinoma. For each case, an example image (first echo) with user-drawn region of interest (a, c) is shown as well as an example spectrum with the fit shown in red (b, d). The inset provides a zoomed view of lines D, E, and, F, which are used to estimate the fatty acid composition. Ppm = parts per million 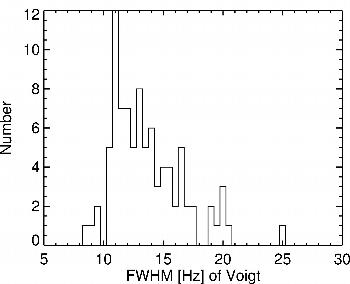 Figure 2. Distribution of line widths for all patients. Line widths are the full width at half maximum (FWHM) of the Voigt profile fit to line B in Figure 1. Number = number of patients 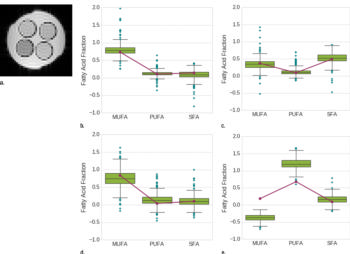