OAK BROOK, Ill. — Researchers using contrast-enhanced MRI have identified leakages in the blood-brain barrier (BBB) of people with early Alzheimer's disease (AD), according to a new study published online in the journal Radiology. The results suggest that increased BBB permeability may represent a key mechanism in the early stages of the disease.

The BBB, a collection of cells and subcellular structures in the cerebrovascular wall that separates the circulating blood from the brain, is essential to keep brain tissue in healthy condition. It regulates the delivery of important nutrients and blocks neurotoxins, while removing surplus substances from the brain.

For the study, researchers used contrast-enhanced MRI to compare 16 early AD patients with 17 healthy age-matched controls. They measured BBB leakage rates and generated a map called a histogram to help determine the amount of the leaking brain tissue.

The BBB leakage rate was significantly higher in AD patients compared with controls and the leakage was distributed throughout the cerebrum—the largest part of the brain. AD patients had a significantly higher percentage of leaking brain tissue in the gray matter, including the cortex, the brain's outer layer. The researchers also found that measurements derived from the histogram showed very subtle BBB impairment in the brain's white matter.

"Blood-brain barrier leakage means that the brain has lost its protective means, the stability of brain cells is disrupted and the environment in which nerve cells interact becomes ill-conditioned," said study author Walter H. Backes, Ph.D., from the Maastricht University Medical Center in Maastricht, the Netherlands. "These mechanisms could eventually lead to dysfunction in the brain."

Indeed, the researchers found a relationship between the extent of BBB impairment and decline in cognitive performance, suggesting that a compromised BBB is part of the early pathology of AD and might be part of a cascade of events eventually leading to cognitive decline and dementia.

The connection between BBB impairment and AD pathology was strengthened by the fact that the addition of diabetes and other non-cerebral vascular diseases to the analysis model did not change the results.

According to Dr. Backes, the key advantage of detecting BBB leakage with contrast MRI is that it can detect early microvascular changes in AD even in cases where no directly visible cerebrovascular abnormalities can be observed.

"For Alzheimer's research, this means that a novel tool has become available to study the contribution of blood-brain barrier impairment in the brain to disease onset and progression in early stages or pre-stages of dementia," he said. 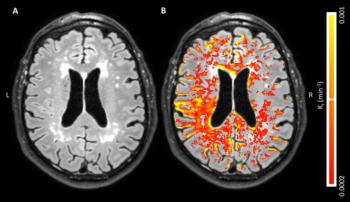 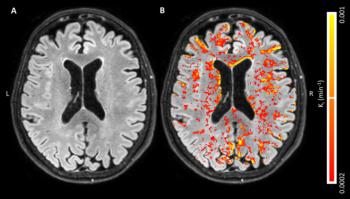