OAK BROOK, Ill. — Bony lesions on the lower part of the thigh bone near the knee are a common but benign finding on MRI in young alpine skiers and should not be confused with more serious conditions, according to a study from Switzerland published in the journal Radiology.

Routine knee MRI of adolescents often reveals tumor-like irregularities in the bone of the distal femur, the part of the thigh bone right above the knee. These irregularities affect the cortical bone, the dense outer surface of the bone. For that reason, they are referred to as distal femoral cortical irregularities (DFCI). DFCI often lead to diagnostic uncertainty because they can be confused with more serious conditions like cancer or infection.

With an increasing number of MRI examinations performed in young patients, DFCI detection is likely to increase, as MRI has a higher sensitivity for detecting lesions than X-rays do, according to study lead author Christoph Stern, M.D., a musculoskeletal radiologist at Balgrist University Hospital in Zürich, Switzerland.

“Our goal was to better understand the pathogenesis of DFCI and to reduce uncertainty in the diagnosis of this benign condition, which should not be mistaken for malignancy,” he said. 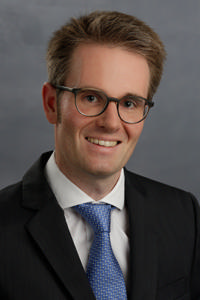 In the first study of its kind, Dr. Stern and colleagues investigated the prevalence of DFCI in youth competitive alpine skiers compared to a control group of young adults. Competitive skiers are exposed to periodical high physical activity and loading patterns to the knee joint that are likely to affect the bones and connective tissue of the joint.

The researchers compared the knee MRIs of 105 youth competitive alpine skiers with those of 105 controls of the same age group collected from 2014 to 2019. They looked for the presence of DFCI at two tendon-bone attachment areas: the ones between the gastrocnemius—the major muscle of the calf—and the femur, and the ones between the adductor magnus muscle of the inner thigh and the femur.

A DFCI was found in more than half of the youth competitive alpine skiers (58.1%), compared with slightly more than a quarter of the controls (26.7%).

DFCIs were observed at the attachment sites of tendons, predominantly at the inside head of the gastrocnemius muscle for both skiers and controls.

“DFCI are benign lesions, and occurrence around the knee joint is associated with repetitive mechanical stress to the attachment sites of tendons into bone,” Dr. Stern said. “DFCI should not be mistaken for malignancy and are not associated with intraarticular damage.”

The most common theory behind the DFCI occurrence is that of a “tug lesion” as a result of repetitive mechanical stress where the tendons attach to the bone.

“According to histologic results of DFCI, which have identified a reactive process, we assume there must be increased bone remodeling with resorption and fibrous proliferation at the site of the tendon attachment that is pronounced in young competitive athletes,” Dr. Stern said.

Similar findings are likely to be found in other groups of athletes who place repetitive strain of the gastrocnemius muscles, such as those whose sports involve jumping, Dr. Stern said.

“This would apply to basketball and volleyball players,” Dr. Stern said. “It might also apply for weightlifters who are exposed to similar pretension states and eccentric loading of the gastrocnemius muscles as skiers during exercise.”

The researchers recommend that invasive diagnostic procedures such as biopsies be avoided in these patients due to the benign, usually asymptomatic, and over time self-limiting character of typical DFCIs at the attachment sites of tendons. However, follow-up with MRI might be justified, they said, especially in the rare case where the DFCI causes pain and other symptoms. 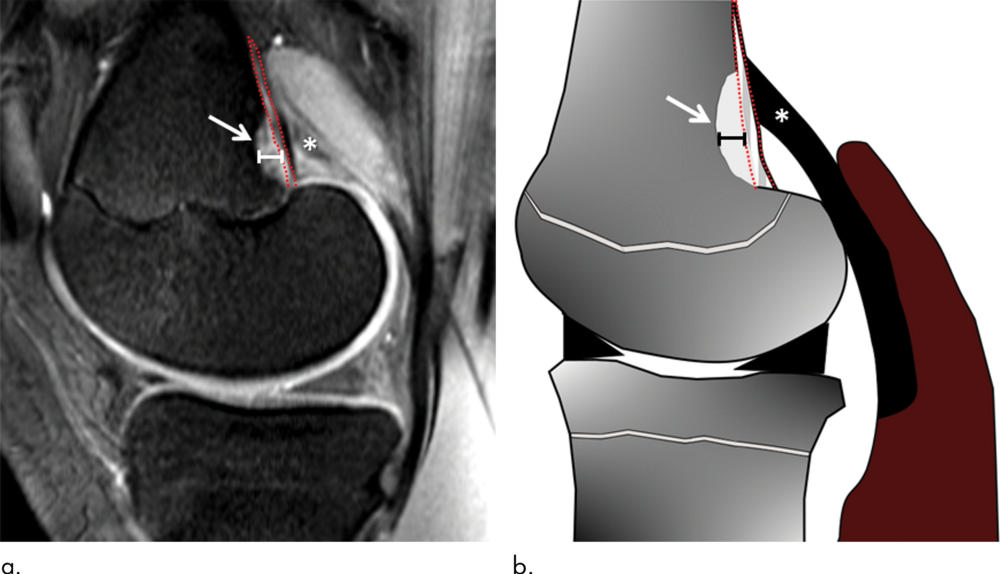 Figure 1. (a) Sagittal fat-suppressed proton density–weighted MRI scan in a 14-year-old male control participant with distal femoral cortical irregularity (DFCI) (arrow) at the level of the tendon attachment of the medial head of the gastrocnemius muscle (MHG) (*). (b) Sagittal illustration with DFCI (arrow) at the MHG attachment (*). The size of the DFCI is determined as the greatest anteroposterior diameter (solid line in a and b). Note that the bandlike hyperintense periosteal stratum osteogenicum (in between red dotted lines in a and b) is not included in the measurement.
High-res (TIF) version
(Right-click and Save As) 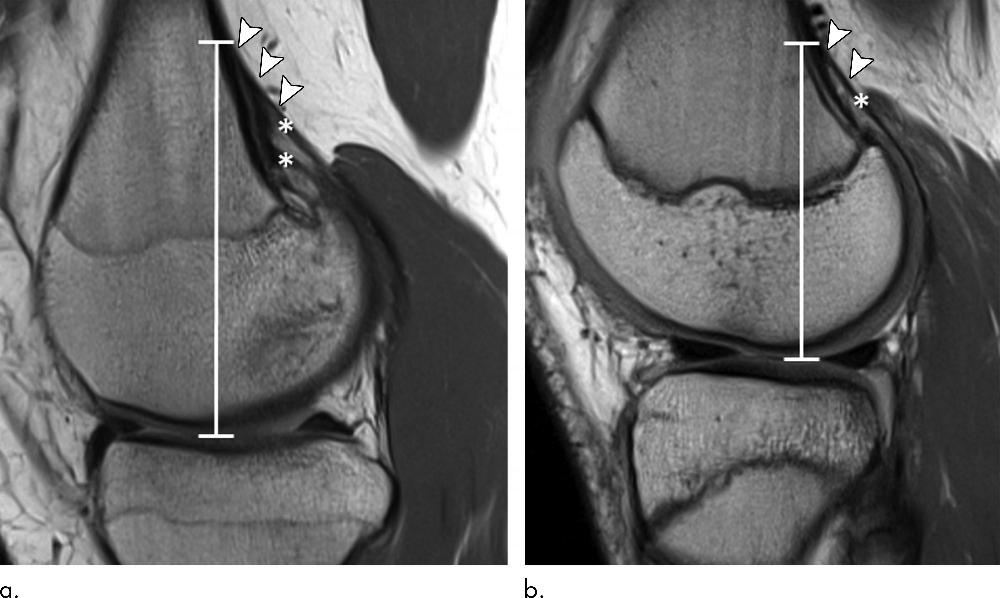 Figure 2. Sagittal proton density–weighted MRI scans in two 15-year-old female control participants without a distal femoral cortical irregularity demonstrate measurement of the tendon attachment position. Images show the craniocaudal position (white line) of the tendon attachment, which is defined as the distance from the level of the joint space to the most cranial attachment of tendon slips (arrowheads) for the (a) medial and (b) lateral head of the gastrocnemius muscle (*). Note that the tendon of the medial gastrocnemius head in a shows two prominent tendon slips.
High-res (TIF) version
(Right-click and Save As) 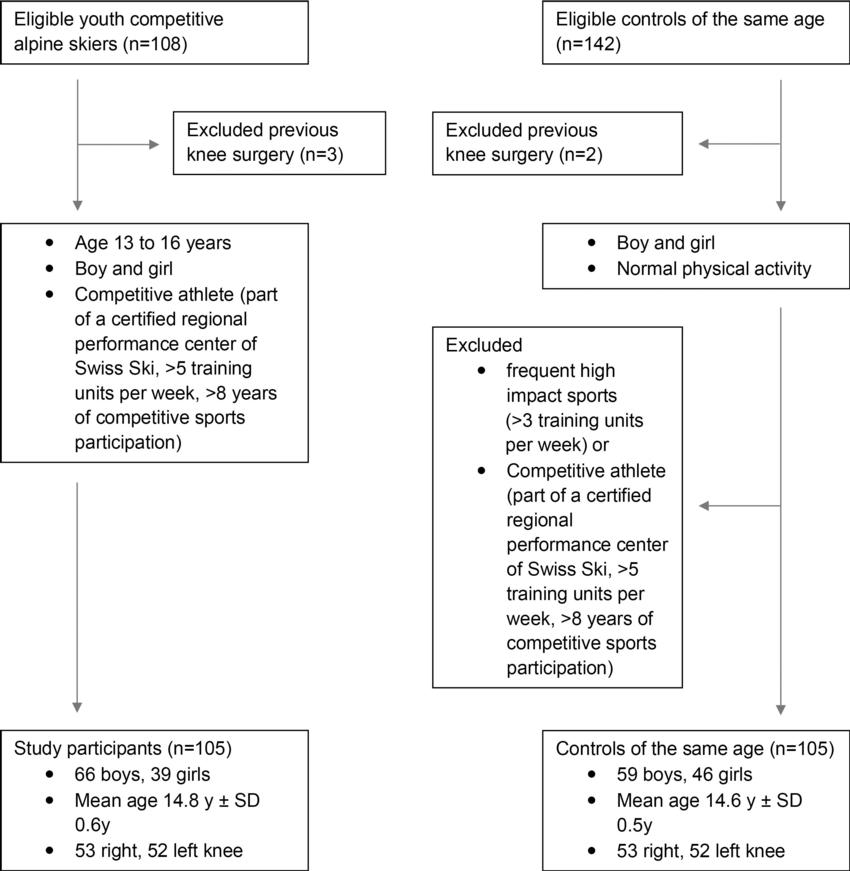 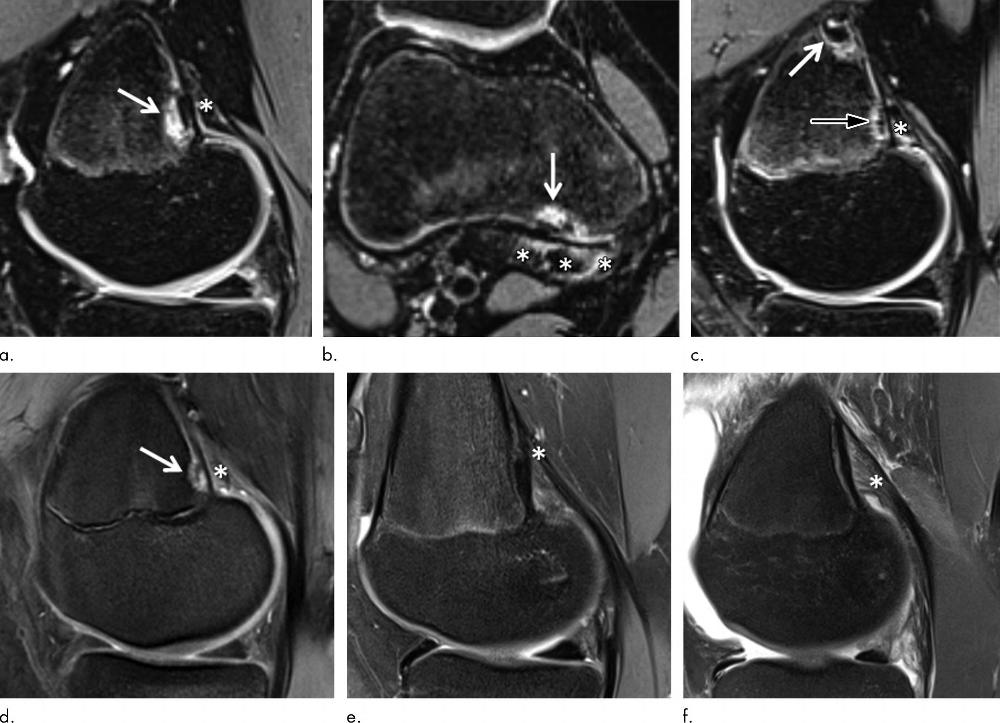 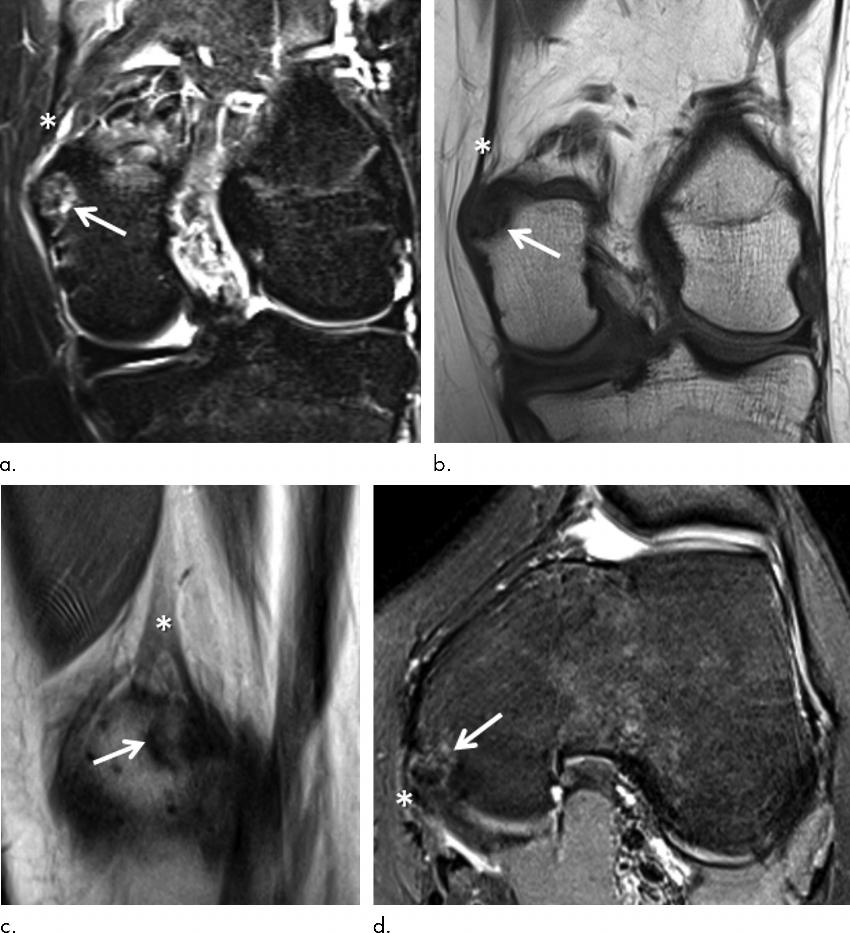 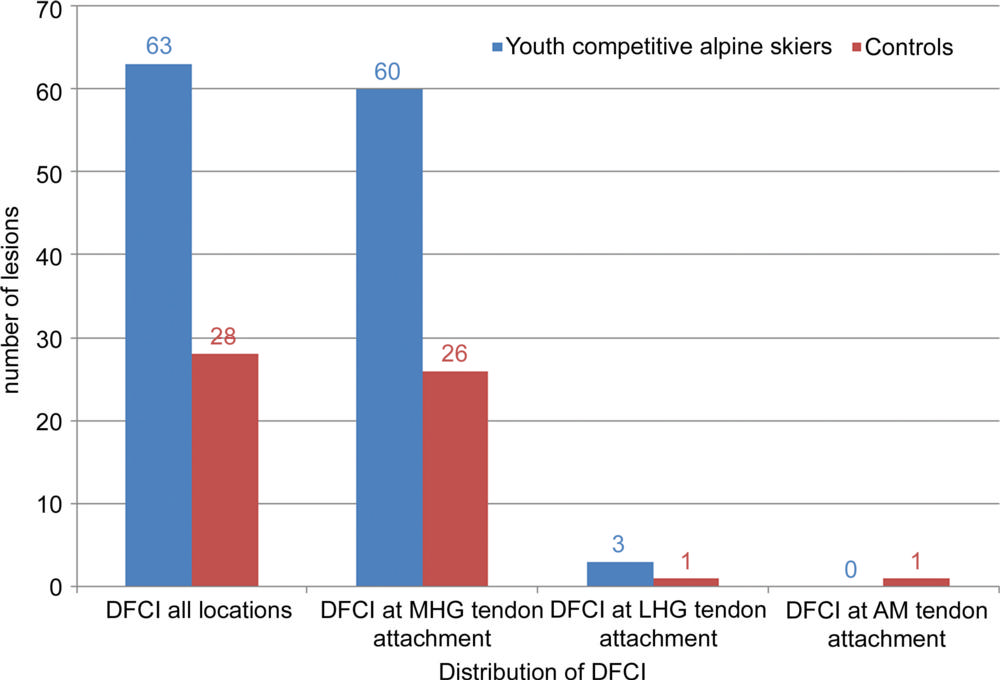