OAK BROOK, Ill. — Extended periods in space have long been known to cause vision problems in astronauts. Now a new study in the journal Radiology suggests that the impact of long-duration space travel is more far-reaching, potentially causing brain volume changes and pituitary gland deformation. 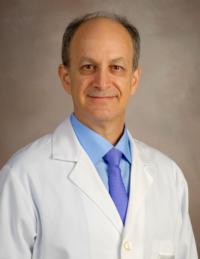 More than half of the crew members on the International Space Station (ISS) have reported changes to their vision following long-duration exposure to the microgravity of space. Postflight evaluation has revealed swelling of the optic nerve, retinal hemorrhage and other ocular structural changes.

Scientists have hypothesized that chronic exposure to elevated intracranial pressure, or pressure inside the head, during spaceflight is a contributing factor to these changes. On Earth, the gravitational field creates a hydrostatic gradient, a pressure of fluid that progressively increases from your head down to your feet while standing or sitting. This pressure gradient is not present in space.

“When you’re in microgravity, fluid such as your venous blood no longer pools toward your lower extremities but redistributes headward,” said study lead author Larry A. Kramer, M.D., from the University of Texas Health Science Center at Houston. Dr. Kramer further explained, “That movement of fluid toward your head may be one of the mechanisms causing changes we are observing in the eye and intracranial compartment.”

To find out more, Dr. Kramer and colleagues performed brain MRI on 11 astronauts, including 10 men and one woman, before they traveled to the ISS. The researchers followed up with MRI studies a day after the astronauts returned, and then at several intervals throughout the ensuing year.

MRI results showed that the long-duration microgravity exposure caused expansions in the astronauts’ combined brain and cerebrospinal fluid (CSF) volumes. CSF is the fluid that flows in and around the hollow spaces of the brain and spinal cord. The combined volumes remained elevated at one-year postflight, suggesting permanent alteration.

“What we identified that no one has really identified before is that there is a significant increase of volume in the brain’s white matter from preflight to postflight,” Dr. Kramer said. “White matter expansion in fact is responsible for the largest increase in combined brain and cerebrospinal fluid volumes postflight.”

MRI also showed alterations to the pituitary gland, a pea-sized structure at the base of the skull often referred to as the “master gland” because it governs the function of many other glands in the body. Most of the astronauts had MRI evidence of pituitary gland deformation suggesting elevated intracranial pressure during spaceflight.

“We found that the pituitary gland loses height and is smaller postflight than it was preflight,” Dr. Kramer said. “In addition, the dome of the pituitary gland is predominantly convex in astronauts without prior exposure to microgravity but showed evidence of flattening or concavity postflight. This type of deformation is consistent with exposure to elevated intracranial pressures.”

The researchers also observed a postflight increase in volume, on average, in the astronauts’ lateral ventricles, spaces in the brain that contain CSF. However, the overall resulting volume would not be considered outside the range of healthy adults. The changes were similar to those that occur in people who have spent long periods of bed rest with their heads tilted slightly downward in research studies simulating headward fluid shift in microgravity.

Additionally, there was increased velocity of CSF flow through the cerebral aqueduct, a narrow channel that connects the ventricles in the brain. A similar phenomenon has been seen in normal pressure hydrocephalus, a condition in which the ventricles in the brain are abnormally enlarged. Symptoms of this condition include difficulty walking, bladder control problems and dementia. To date, these symptoms have not been reported in astronauts after space travel.

The researchers are studying ways to counter the effects of microgravity. One option under consideration is the creation of artificial gravity using a large centrifuge that can spin people in either a sitting or prone position. Also under investigation is the use of negative pressure on the lower extremities as a way to counteract the headward fluid shift due to microgravity.

Dr. Kramer said the research could also have applications for non-astronauts.

“If we can better understand the mechanisms that cause ventricles to enlarge in astronauts and develop suitable countermeasures, then maybe some of these discoveries could benefit patients with normal pressure hydrocephalus and other related conditions,” he said. 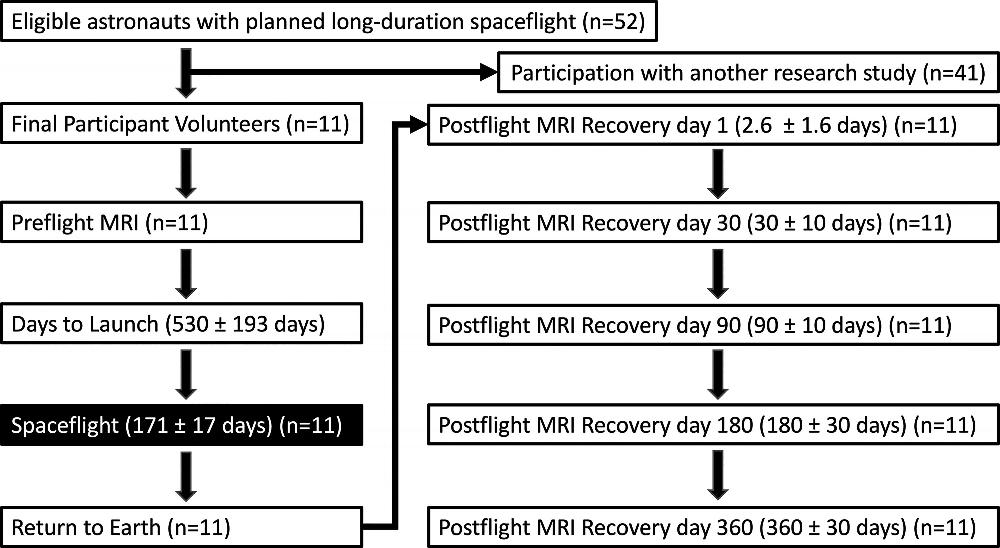 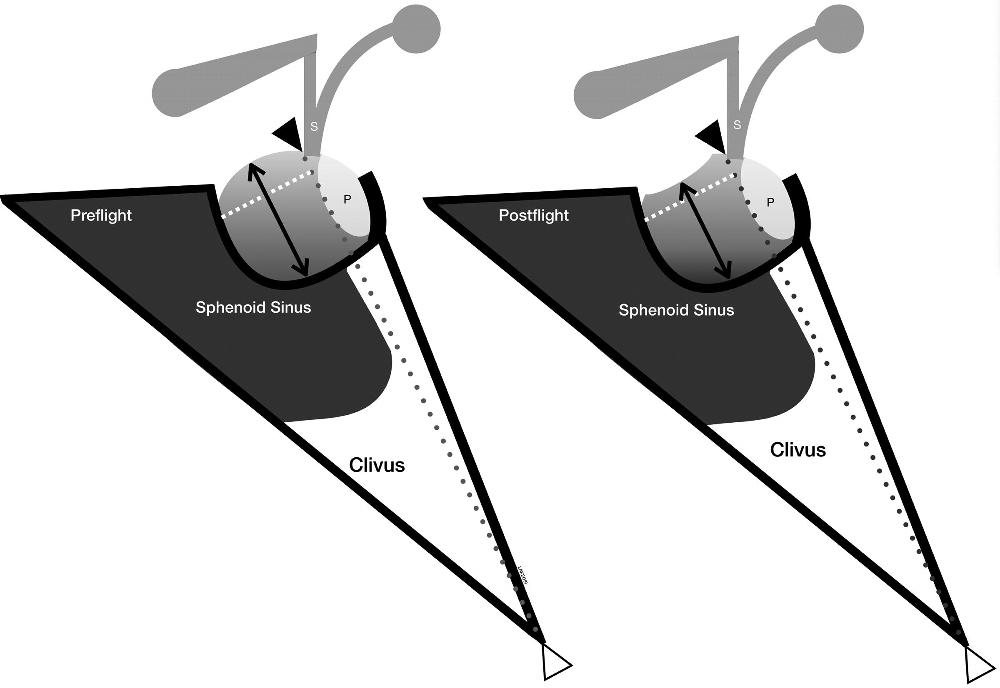 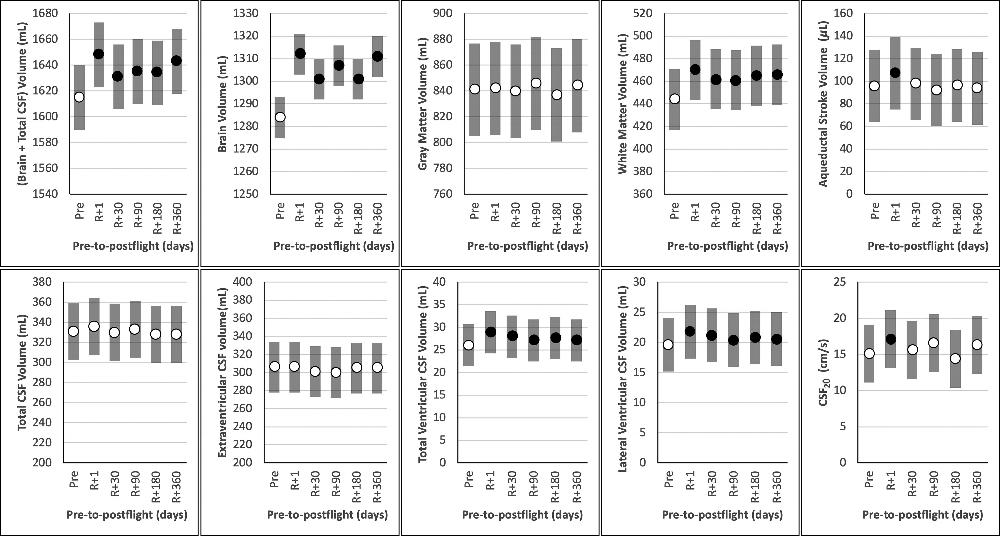 Figure 5. Reconstructed sagittal 5-mm orthogonal midline images in the brain using the sagittal three-dimensional T1 weighted data set. (a) Preflight baseline image and (b) matching postflight image (postflight day 1) in the same astronaut. The black arrowheads show upward expansion of the anterior, middle, and posterior superior margins of the lateral ventricle with associated narrowing of the marginal sulcus of the cingulate sulcus (white arrowhead). There is subtle expansion of the third ventricle (indicated by a 3), which has displaced the thalamus (T) from midline, making it less visible. There is thickening of the intermediate signal scalp soft tissues (arrows).
High-res (TIF) version
(Right-click and Save As) 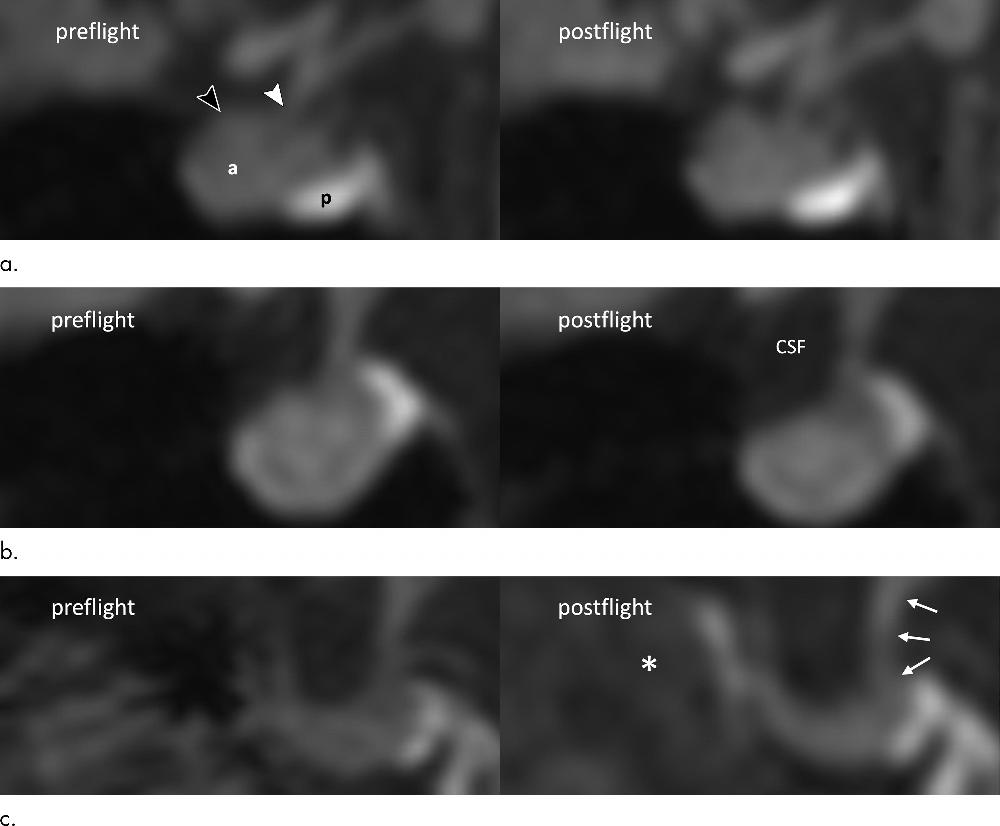