CHICAGO — Valerie P. Jackson, M.D., was named president of the Radiological Society of North America (RSNA) Board of Directors today at the Society's annual meeting in Chicago. 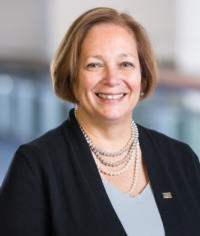 An expert in the field of breast imaging, Dr. Jackson is the executive director of the American Board of Radiology (ABR), a position she has held since 2014. She previously served on ABR's board of trustees from 2001 to 2010. Dr. Jackson received her medical degree in 1978 from the Indiana University School of Medicine, and completed her residency at the Indiana University Medical Center in 1982. Dr. Jackson is the Eugene C. Klatte Professor Emeritus and has had numerous academic appointments at Indiana University School of Medicine over the years, including lecturer, professor and chair of the Department of Radiology and Imaging Sciences.

As president, Dr. Jackson will develop programs and initiatives that support RSNA's mission to promote excellence in patient care and health care delivery through research, education and technologic innovation.

"The RSNA annual meeting is the leading forum for the introduction of medical imaging technologies, and the increasingly international attendance at the meeting allows people from all over the world to share knowledge and ideas," Dr. Jackson said. "RSNA continues to grow as a world leader in informatics and has become a critical convener for artificial intelligence, machine learning and deep learning. While the focus of my career has been predominantly in education, I plan to work hard to continue to advance RSNA in all of these areas."

Dr. Jackson has published more than 100 peer-reviewed articles and 20 books and book chapters with an emphasis on breast imaging and radiologic education. She has served as principal investigator on numerous funded grants, including several focused on radiologic education. Dr. Jackson has been a course director and presenter at the RSNA Faculty Development Workshop and is a highly regarded lecturer and educator, having given more than 320 scientific and educational presentations at meetings worldwide.

Dr. Jackson has served as a manuscript reviewer for numerous journals including American Journal of Roentgenology, Journal of the American College of Radiology, Investigative Radiology, Medical Physics, Academic Medicine and Radiology, where she served as associate editor on the editorial board from 1989 to 1998, and as consultant to the editor in 1999.

An RSNA member since 1982, Dr. Jackson has served the Society in numerous roles, including chair of the Refresher Course Committee from 2009 to 2012 and chair of the Breast Imaging Subcommittee of the Scientific Program Committee from 2003 to 2006. She was a member of the Public Information Advisors Network from 1997 to 2017, and a member of the RSNA News Editorial Board from 2005 to 2008. She served RSNA as first vice president from 2008 to 2009 and was a member of the RSNA Centennial Committee. Dr. Jackson has been active on many committees of the RSNA Research & Education (R&E) Foundation and served on the R&E Foundation Board of Trustees from 2009 to 2015. She joined the RSNA Board of Directors in 2012 and served as president-elect in 2018.