Soccer Heading May Be Riskier for Female Players

OAK BROOK, Ill. — Researchers have found that women who play soccer may be more at risk than their male counterparts. According to a new study published in the journal Radiology, female soccer players exhibit more extensive changes to brain tissue after repetitive 'heading' of the soccer ball.

Soccer is the most popular competitive sport in the world, and female participation in the sport is on the rise. The Fédération Internationale de Football Association (FIFA) 2014 Women's Football Survey reported more than 30 million female soccer players worldwide.

Heading, in which players field the soccer ball with their heads, is a key component of the game. Heading-related impacts have been associated with abnormalities in the brain's white matter that are similar to those seen in patients with traumatic brain injury. Cumulative heading over a one-year period has been associated with cognitive dysfunction and microstructural changes to the brain's white matter.

Long-term consequences of repeated exposure to heading is an area of concern because repetitive head injury in athletes has been associated with cognitive decline and behavioral changes.

"In general, men do a lot more heading than women, but we wanted to specifically examine if men and women fare similarly or differently with a similar amount of exposure to repeated impacts to the head," said the study's lead author, Michael L. Lipton, M.D., Ph.D., professor of radiology at the Gruss Magnetic Resonance Research Center at the Albert Einstein College of Medicine and medical director of MRI at Montefiore Medical Center in New York City.

Dr. Lipton and colleagues used diffusion tensor imaging (DTI), an advanced MRI technique, to assess microscopic changes in the brain's white matter in 98 amateur soccer players—49 men and 49 women—with an average age of 25.8 years. All participants had many years of soccer and heading exposure, including 12 months of frequent heading exposure leading up to the study (median headers: 487 per year for the men and 469 per year for the women). Participants had no significant differences in demographic factors.

DTI produces a measurement, called fractional anisotropy (FA), which characterizes the movement of water molecules in the brain. In healthy white matter, the direction of water movement is fairly uniform and measures high in FA. When water movement is more random, FA values decrease.

"A decline in FA is an indicator of changes in the white matter microstructure that may be indicative of inflammation or loss of neurons, for example," Dr. Lipton said.

For the study, the researchers compared white matter FA values among the male and female soccer players. The analysis revealed that while both men and women experienced lower FA values related to more repetitive heading, women exhibited lower FA levels across a much larger volume of brain tissue.

"In both groups, this effect we see in the brain's white matter increased with greater amounts of heading," Dr. Lipton said. "But women exhibit about five times as much microstructural abnormality as men when they have similar amounts of heading exposure."

"The important message from these findings is that there are individuals who are going to be more sensitive to heading than others," Dr. Lipton said. "Our study provides preliminary support that women are more sensitive to these types of head impacts at the level of brain tissue microstructure."

Dr. Lipton cautions that more investigation is warranted to confirm and further characterize gender differences in vulnerability to brain injury due to heading.

"We don't have enough information yet to establish guidelines to protect the players," Dr. Lipton said. "But by understanding these relationships—how different people have different levels of sensitivity to heading—we can get to the point of determining the need for gender-specific recommendations for safer soccer play." 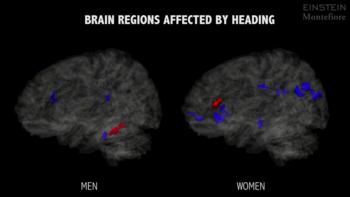 Video 1. The video shows areas where microstructural abnormality was associated with heading. The areas in blue indicate where more heading resulted in lower FA, signifying abnormal white matter. The red areas show higher FA, perhaps representing a compensatory response to injury or an effect of training. The study found that regions of lower FA, consistent with damaged brain tissue, were five times more extensive in female soccer players than in males, suggesting that sex-specific guidelines may be warranted for preventing soccer-related head injuries. 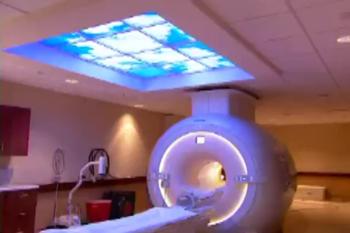 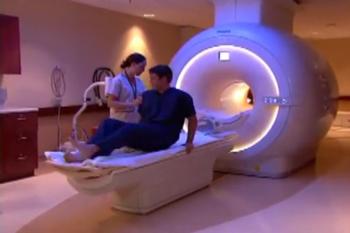 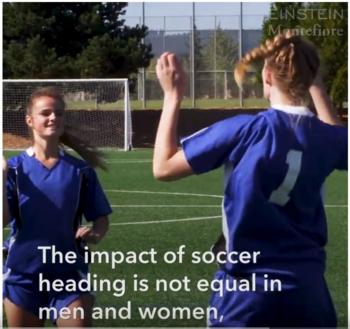 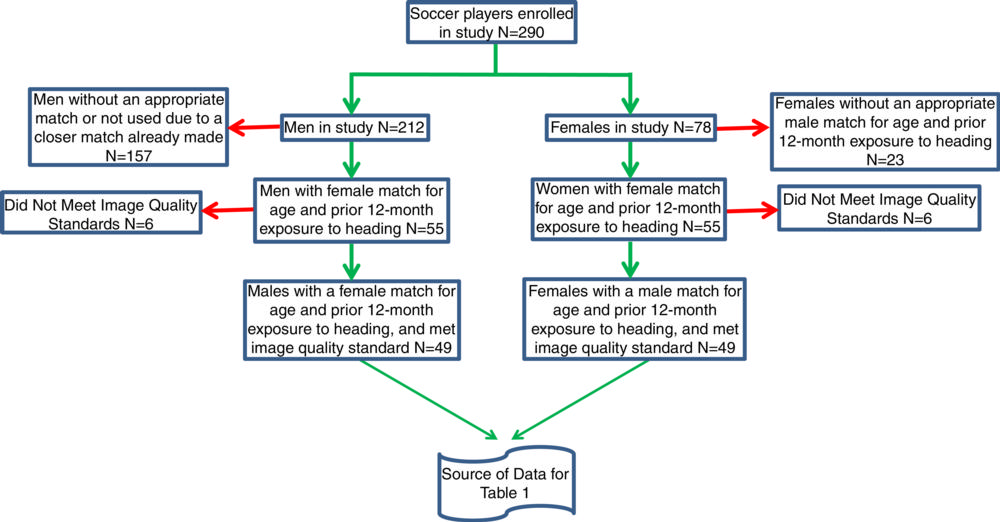 Figure 1. Flowchart shows selection of amateur soccer players included in analysis. With exclusion of participants who did not meet image quality standards, the paired participant was also removed, resulting in removal of six pairs (n = 12) from the analysis.

Figure 2. A, B, Three-dimensional semitransparent images of the Johns Hopkins University template brain oriented facing the right hemisphere in, A, male, and, B, female soccer players demonstrate that lower fractional anisotropy (FA) is associated with heading more extensively in women than in men. Fewer regions of significant association of FA with heading are detected in men than in women. C, Image shows that significant differences in association of heading and FA between men and women are predominantly co-located with areas where women, but not men, show significant association of heading and FA. 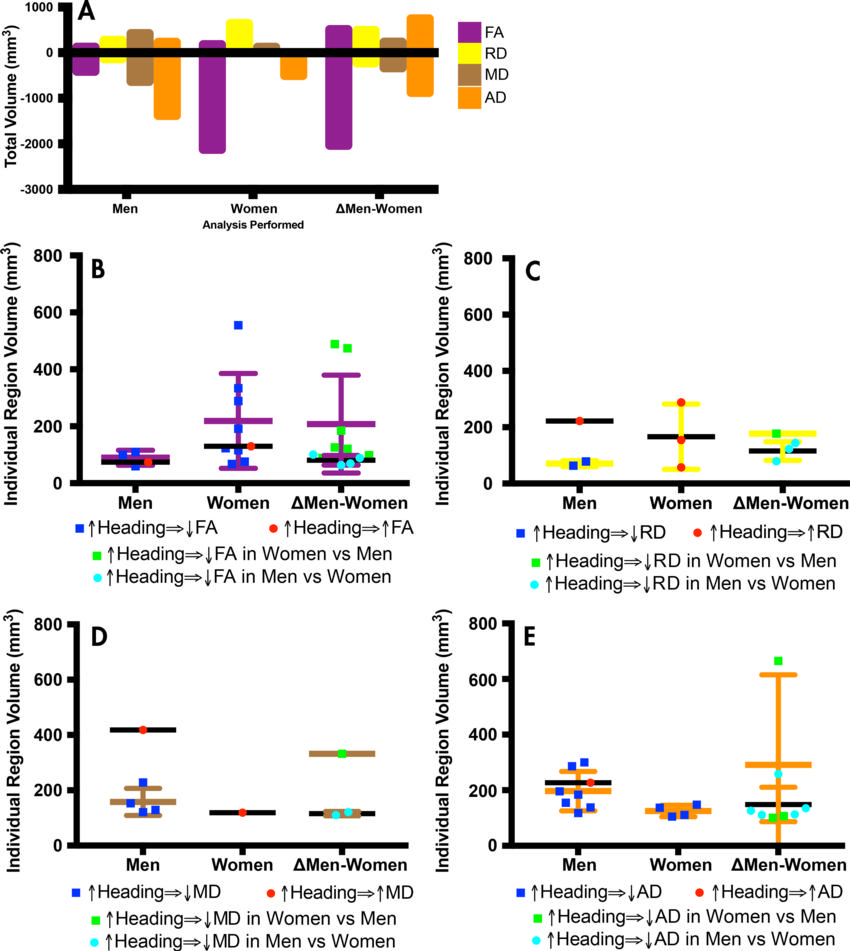