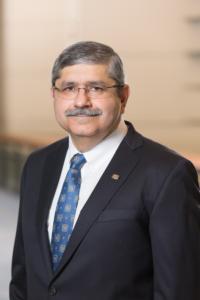 CHICAGO (Nov. 29, 2017) — Umar Mahmood, M.D., Ph.D., was named to the Radiological Society of North America (RSNA) Board of Directors today at the Society's annual meeting in Chicago. A leading researcher and sought after mentor, Dr. Mahmood joins the board as the liaison for international affairs.

"Technology is rapidly changing how imaging is performed and interpreted, but a constant through many, many decades and throughout the world has been the steady hand of radiologists to use imaging to help people, both individually to diagnose disease, and collectively to better understand pathophysiology," Dr. Mahmood said. "Throughout my career, the RSNA has always represented the pinnacle of radiology. To join the RSNA Board of Directors, and to be given the opportunity as the liaison for international affairs to help bring radiologists together from around the globe to jointly improve our patients' lives is a profoundly meaningful honor for me."

Dr. Mahmood is vice chair for precision imaging in the Department of Radiology at Massachusetts General Hospital (MGH) and professor of radiology at Harvard Medical School in Boston. An accomplished researcher, he has received more than $20 million in grant funding as principal investigator, primarily from the National Institutes of Health (NIH), for his research into the applications of molecular imaging to guide precision medicine, particularly in developing and applying positron emission tomography (PET) and optical imaging technologies for disease characterization and therapy optimization.

During his career, Dr. Mahmood has had a longstanding commitment to growing the next generation of physician scientists. Of the more than 60 research trainees he has guided, many have become academic medical faculty, and a number have received their own research funding as principal investigator under his direct mentorship.

A committed volunteer, Dr. Mahmood currently serves as chair of the RSNA Research & Education (R&E) Foundation Grant Program, and as a member of the R&E Foundation Board of Trustees. He has also served as vice chair of RSNA's Committee on Scientific Affairs, as an associate editor of Radiology, and as a chair or member of multiple other RSNA committees focused on advancing imaging sciences. Dr. Mahmood received an RSNA R&E Foundation Research Resident grant in 2000.

Additionally, Dr. Mahmood is chair of the Board of Scientific Counselors of the Clinical Center of the NIH, a fellow of the American College of Radiology, a member of the Board of Directors of the Society of Nuclear Medicine and Molecular Imaging (SNMMI), and chair of the SNMMI Scientific Program Committee. He delivered the SNMMI Henry N. Wagner Jr., M.D., Highlights Lecture in Oncology in 2014 and 2015, and received the Distinguished Investigator award from the Academy for Radiology & Biomedical Imaging Research in 2014.

Dr. Mahmood earned his bachelor's degree from the California Institute of Technology, and his medical degree and doctorate in biophysics and physiology from Cornell University. His doctoral and postdoctoral work at Memorial Sloan Kettering Cancer Center focused on tumor energetics and membrane physiology, studied using 31P nuclear magnetic resonance spectroscopy. He completed his radiology residency at MGH in 2001 and has maintained faculty appointments at MGH and Harvard Medical School since. During his more than 20 years at MGH, he has conducted PET, optical and MR imaging research, and has focused on translational efforts to better understand drivers of cancer, including the tumor microenvironment, cancer signaling pathways, changes in cancer metabolism, and the interaction of the immune system with tumors.