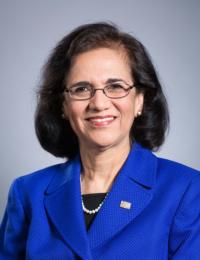 CHICAGO — Vijay M. Rao, M.D., was named president of the Radiological Society of North America (RSNA) Board of Directors today at the Society's annual meeting in Chicago.

A global authority on head and neck imaging, and also recognized for her health services research in radiology, Dr. Rao is the David C. Levin Professor and Chair of Radiology at Sidney Kimmel Medical College of Thomas Jefferson University and senior vice president and chair of Enterprise Radiology and Imaging at Jefferson Health in Philadelphia.

As president, Dr. Rao will work to emphasize the significant role radiology has in transforming health care delivery in the digital age. The RSNA is well positioned to support innovative initiatives that embrace the power of emerging technologies to drive excellence in patient care in the value-driven era of healthcare.

"It is gratifying to see RSNA volunteers passionately devote their time to support major initiatives that are greatly promoting education and research with the goal of transforming patient care and population health," Dr. Rao said. "As a former board liaison for Information Technology and Annual Meeting, I strongly believe RSNA is instrumental in moving the field forward. I am excited to represent such a vibrant and innovative organization, and nurture collaborations worldwide."

Dr. Rao is a graduate of the All India Institute of Medical Sciences, India's premier medical school. After completing her radiology residency in 1978 at Thomas Jefferson University Hospital, she has remained on the faculty ever since. A passionate educator, she served as residency program director, associate chair and then vice chair for education, and co-director of the Neuroradiology/ENT division. In 2002, she was appointed chair of Jefferson's Department of Radiology, becoming the first female chair of a clinical department in Jefferson's history. In 2016, she was named senior vice president of Enterprise Radiology and Imaging at Jefferson Health. She is also a trustee of the Thomas Jefferson University Hospitals board.

Dr. Rao is recognized as one of the leading experts on imaging of the head and neck. She is also very active and widely recognized as a thought leader in health services research in radiology. She has published over 220 peer reviewed articles, a dozen book chapters and 275 abstracts in medical literature and has edited a popular atlas textbook on MRI and CT of the head and neck. She has given 300 presentations at national and international radiology meetings, including invited talks at other academic institutions, and several named lectures. An RSNA member since 1981, Dr. Rao has led numerous courses and sessions at RSNA annual meetings and served on the Health Services Policy & Research subcommittee of the RSNA Scientific Program Committee.

Dr. Rao has held many leadership roles in national organizations, including president of the American Society of Head and Neck Radiology, the Association of Program Directors in Radiology (APDR) and the American Association for Women Radiologists (AAWR). She has served the RSNA Research & Education (R&E) Foundation in a number of roles, including member of the Board of Trustees from 2008 to 2011, and in 2016. In 2011, she was named to the RSNA Board of Directors. In 2017, she served as president-elect of RSNA. She is also a member of the board of the Academy for Radiology & Biomedical Imaging Research and the Pennsylvania Radiologic Society. She has served on the editorial boards of multiple prestigious radiology journals.

She serves as a role model and source of inspiration for many radiologists. She has received numerous awards. In 2005, she was honored by the Philadelphia Business Journal as one of 25 Women of Distinction throughout the region. In 2006, she received the APDR Achievement Award for her outstanding contributions to radiology education nationally. In 2010, she received the Distinguished Radiologist Award from the American Association of Radiologists of Indian Origin. In 2014, she received the gold medal of the Association of University Radiologists. In 2014, she was also honored with the Marie Curie Award of the AAWR. She has been consistently chosen by her peers to be included on Philadelphia Magazine's annual list of Top Doctors and Best Doctors for several years. In 2017, she was honored by the Israel Radiological Society with honorary membership.