OAK BROOK, Ill. – Researchers have found that damage to white matter in the brains of former college and professional football players due to recurrent head impacts can be related to playing position and career duration, according to a new study published online in the journal Radiology. 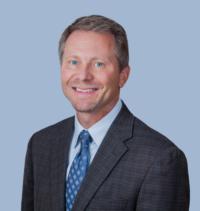 “Our study, by including both former collegiate and professional players, gives us the ability to examine career duration and playing position along with concussion history,” said study author Kevin Guskiewicz, Ph.D., research director for the Center for the Study of Retired Athletes at the University of North Carolina at Chapel Hill (UNC-Chapel Hill). “By doing so, we found that these factors are all important when considering the long-term effects of playing football.”

The research team recruited 64 former collegiate and professional football players, aged 52 to 65. Half of the former athletes played only college football, and half continued on to the professional league. Half of the former players reported three or more prior concussions, while the other half reported one or no prior concussions. The researchers recruited an equal number of speed and non-speed playing positions. The non-speed positions consisted of offensive or defensive linemen. 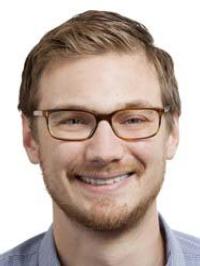 Two MRI techniques—diffusion tensor imaging (DTI) and functional MRI (fMRI)—were used to examine 61 of the former players. MRI data from the other three players were excluded due to excessive movement or inability to complete the MRI exam. DTI was used to analyze white matter structural integrity, while fMRI was used to assess brain function while the players performed a memory task.

“While DTI and fMRI have been used previously in the field of concussion research, we are among the first to combine the two techniques,” said co-author Michael Clark, medical student at UNC-Chapel Hill. “We were interested in how white matter and the ability to recruit brain resources to complete a memory task might be affected by head impact exposure in terms of career length and the position played. By using two different and complementary types of MRI, we were able to see the relationship between structure and function, both of which are affected by head impact exposure.”

The results showed a significant interaction between career duration and concussion history. Former college players with three or more concussions had lower integrity in a broadly distributed area of white matter compared to those with one concussion or less. However, the opposite was true for former professional players.

The researchers speculate that players with a long career duration, exposure to recurrent concussive events, and who are cognitively normal in their late 50s may not be reflective of the highly exposed former professional football player population as a whole.

“We’re not exactly sure why this is the case for the former pros,” Clark said. “It may have to do with the sample of athletes we recruited into the study. But the findings could suggest that a career with additional exposure to football is not necessarily worse than a shorter duration of exposure.”

The non-speed players with a history of recurrent concussion had reduced integrity in the frontal white matter and lower measure of activation during the fMRI task than those with one concussion or less. This was not the case for the speed players.

The interactions observed between concussion histories and playing positions suggest there may be important differences in the mechanisms of injury between speed and non-speed players. The magnitude, location and frequency of head impacts in football differ by position. Offensive backs experience impacts at greater acceleration. Linemen, however, tend to experience a greater overall frequency of impacts, and have the greatest proportion of impacts to the front of the helmet. The high proportion of frontal impacts experienced by non-speed players may result in more localized damage to frontal white matter tracts as compared to the more variable impact locations experienced by speed position players.

“These findings suggest the playing position of an athlete may change the effects of concussions on the brain,” Dr. Guskiewicz said. “The mechanisms of concussions in non-speed players are fundamentally different from those of speed position players, suggesting that perhaps position-specific helmets are warranted.”

The researchers added that more work is needed to better understand the results and to determine the underlying mechanisms regarding how subconcussive and concussive impacts affect brain health later in life.

RSNA is an association of over 54,000 radiologists, radiation oncologists, medical physicists and related scientists promoting excellence in patient care and health care delivery through education, research and technologic innovation. The Society is based in Oak Brook, Ill. (RSNA.org) 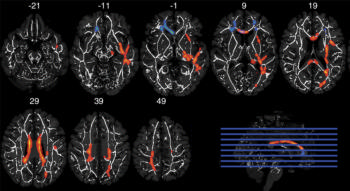 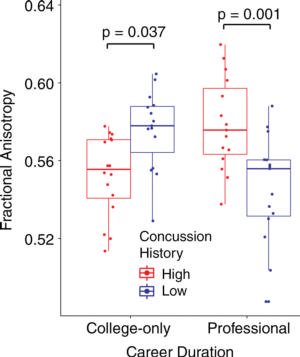 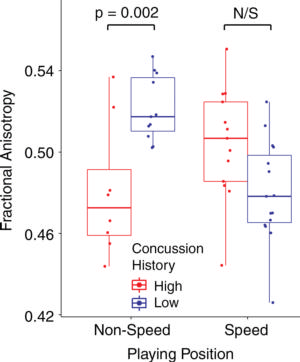 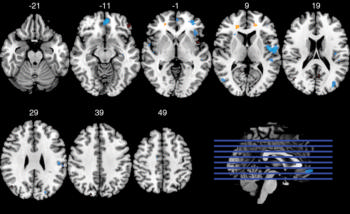 Figure 4. Axial functional MRIs show analysis of the interaction between concussion history and playing position for the task related functional MRI blood oxygen level–dependent response during a working memory N-back task. Each task-level contrast was modeled separately: 1-back greater than 0-back (orange), 2-back greater than 1-back (red), 2-back greater than 0-back (blue). Clusters with a significant interaction (P ˂ .001) between concussion history and playing position are overlaid on the Montreal Neuroimaging Institute template brain. Numbers are the y coordinate of the Montreal Neuroimaging Institute space (in millimeters).

Figure 5. Box-and-whisker plots show mean percent signal change from the significant clusters for the interaction of concussion history and playing position for each comparison of the functional MRI task.