OAK BROOK, Ill. — A novel interventional radiology technique for weight loss is safe and well tolerated in morbidly obese individuals, according to a new study appearing in the online edition of Radiology. Though the results are preliminary, the technique has the potential to be a new weapon in the war on obesity.

Obesity—defined as a body mass index (BMI), or measure of body fat based on weight and height, of 30 or more—is a major public health problem that affects more than one-third of Americans, according to the National Institute of Diabetes and Digestive and Kidney Diseases. Obese people face an increased risk of diabetes, stroke, heart attack and other major health issues. Traditional approaches like a low-calorie diet, behavior modification, exercise and medication have shown limited effectiveness. One of the more successful interventions has been bariatric surgery, but its invasiveness can result in significant complications.

Trans-arterial embolization of the gastric fundus, also known as bariatric embolization, has emerged in recent years as another potential weight-loss tool. The technique itself has been used for decades to stop bleeding in the gastric artery, but the idea of using it to treat obesity arose more recently based on observations of hormonal changes in patients who underwent bariatric surgery. 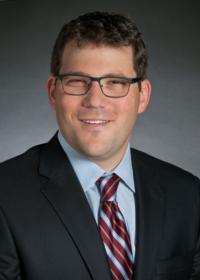 “A number of research papers in the 1990s found signs of hormonal changes after bariatric surgery,” said the study’s lead author, Clifford R. Weiss, M.D., from the Johns Hopkins University School of Medicine in Baltimore. “In particular, there was a pretty rapid reduction in ghrelin, the most potent hunger-stimulating hormone we know. The hormone is produced in an area of the stomach called the fundus, which is fed primarily by the left gastric artery.”

In bariatric embolization, very small, bead-like particles are introduced into the left gastric artery, using imaging guidance and minimally invasive techniques. Once in place, they obstruct the circulation of blood, leading to ischemia and a reduction in ghrelin production. Researchers at the Johns Hopkins University School of Medicine have developed and studied the technique for weight loss over the last 10 to 12 years, Dr. Weiss said.

This phase of the study (June 2014 to August 2015) included results from the first five patients, four of whom were women. Prior to intervention, the patients were morbidly obese, with a mean BMI of 43.8. Using fluoroscopic guidance, interventional radiologists were able to embolize the left gastric artery in all five patients with 300- to 500-micrometer beads. The patients experienced an average weight loss of 5.9 percent at one month and 9.0 percent at three months. Serum ghrelin levels dropped 17.5 percent, on average, at three months. There was a trend toward improvement in quality-of-life parameters. There were no major adverse events in the study group.

Dr. Weiss, along with co-principal investigator, Aravind Arepally, M.D., from Piedmont Healthcare, used embolic beads that were approximately 10 times larger than the beads used in the preclinical studies, as smaller beads are thought to increase the risk of gastric ulceration. However, performing gastric artery embolization with smaller beads may produce a greater reduction in ghrelin, so future studies may be needed to examine the clinical benefits of smaller-caliber spheres.

“These are very promising and exciting results,” Dr. Weiss said. “I think this paper and the additional data we’re compiling show that bariatric embolization is very well tolerated by patients, and there are signs that it could have medium- and long-term efficacy for weight loss.”

Dr. Weiss and colleagues will complete the study in the fall and have all the data collected by the end of the year. They can then do a more definitive study on efficacy, Dr. Weiss said, with a larger number of patients and a focus on the long-term results.

Dr. Weiss emphasized that bariatric embolization is not intended to be a first-line treatment for obesity or a replacement for bariatric surgery.

“Obesity is a complicated disease that takes many different therapies to treat, including psychological counseling, diet, medication and, in extreme cases, surgery,” he said. “If we can provide one more piece to the armamentarium, that would be an exciting next step in the treatment of obese patients.” 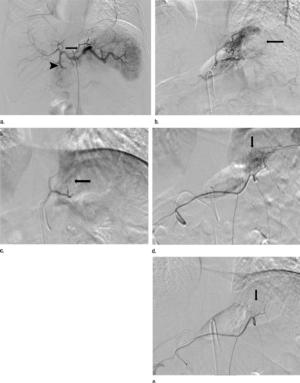 Figure 1. Example of bariatric embolization in a 32-year-old African American woman with a starting weight of 253 pounds and a starting BMI of 47.8 kg/m2. She demonstrated an 8.8 pound weight loss from the 1-week baseline, a 12 pound weight loss from baseline 2 weeks after bariatric embolization, and an 18.2 pound weight loss from baseline at 12 weeks. This represents a 12.3 percent of loss of excess body weight at 12 weeks and a 12-week BMI of 44.4 kg/m2. (a) Celiac angiogram obtained before bariatric embolization shows classic left gastric artery (LGA) anatomy, with the LGA arising from the proximal celiac artery (arrow). The gastroduodenal artery (arrowhead) is also seen. (b) LGA angiogram obtained before bariatric embolization shows perfusion of the fundus with an area not perfused by this vascular distribution (wedge defect, arrow). This area is supplied by the left gastroepiploic artery (GEA). (c) LGA angiogram obtained after distal embolization with 300–500-µm Embospheres shows devascularization of the corresponding fundal vascular territory (arrow). (d) Subselection of the left GEA via the gastroduodenal artery was performed. Left GEA angiogram shows the vascular contribution to the gastric fundus (arrow), corresponding to the wedge defect seen on the LGA angiogram. (e) After embolization with 300–500-µm Embospheres, there was devascularization of the left gastroepiploic gastric fundal distribution (arrow). 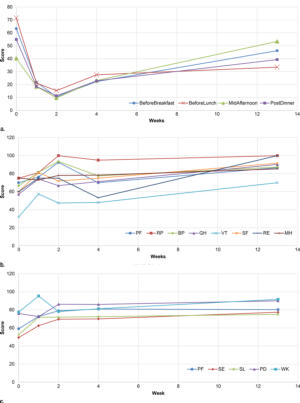 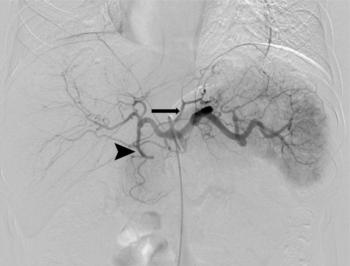 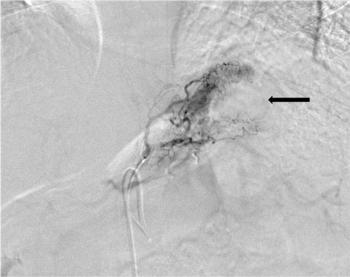 Figure 4. LGA angiogram obtained before bariatric embolization shows perfusion of the fundus with an area not perfused by this vascular distribution (wedge defect, arrow). This area is supplied by the left gastroepiploic artery (GEA). 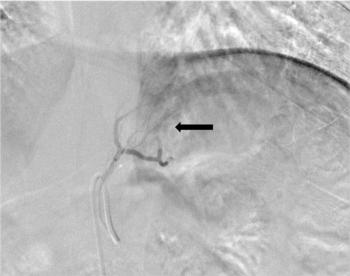 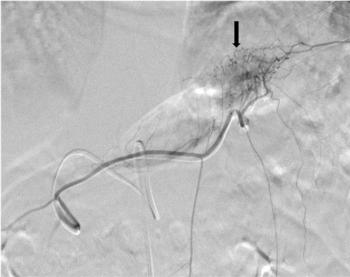 Figure 6. Subselection of the left GEA via the gastroduodenal artery was performed. Left GEA angiogram shows the vascular contribution to the gastric fundus (arrow), corresponding to the wedge defect seen on the LGA angiogram. 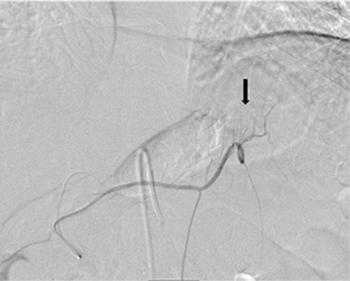 Figure 7. After embolization with 300–500-µm Embospheres, there was devascularization of the left gastroepiploic gastric fundal distribution (arrow).