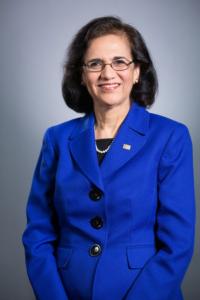 A global authority on head and neck imaging, and also recognized for her health services research in radiology, Dr. Rao is The David C. Levin Professor and Chair of Radiology at Jefferson Medical College of Thomas Jefferson University in Philadelphia.

A graduate of the All India Institute of Medical Sciences, Dr. Rao has remained on the faculty at Thomas Jefferson University since completing her residency there in 1978. She was appointed associate chair for education in 1989 and vice chair for education in 2000. In 2002, she became the first woman chair of a clinical department in the university's history. She is a trustee of the Thomas Jefferson University Hospital System.

As president-elect of the RSNA Board, Dr. Rao will support RSNA's commitment to innovative initiatives to deliver high-quality educational materials to the radiology community by leveraging digital technology.

"This will be a transformative journey for RSNA," Dr. Rao said. "In an effort to drive excellence in patient care, RSNA will continue to develop standards for image sharing, structured reports and shared decision making. I find it gratifying to see the RSNA Research and Education (R&E) Foundation increasing grants and awards to support brilliant young radiologists, allowing them to pursue their dreams, which also advances the field."

Dr. Rao has published more than 200 papers, 260 abstracts in medical literature, and a dozen book chapters, and she co-edited MRI and CT Atlas of Correlative Imaging in Otolaryngology. She is a highly regarded lecturer and educator and has given nearly 200 invited lectures at academic universities and meetings worldwide.

An RSNA member since 1981, Dr. Rao has led numerous courses and sessions at RSNA annual meetings and served on the Health Services Policy & Research subcommittee of the RSNA Scientific Program Committee. She has served the RSNA R&E Foundation in a number of roles, and has been a member of the board of trustees since 2008.

Dr. Rao was also honored in 2005 by the Philadelphia Business Journal as one of 25 Women of Distinction throughout the region. She has been chosen numerous times by her peers as a Top Doctor in Radiology, listed in Philadelphia Magazine. Dr. Rao served as RSNA board chair from 2015 to 2016.