OAK BROOK, Ill. — The Medicare Shared Savings Program (MSSP) has produced small but significant improvements in mammography utilization in its first three years, according to a new study published online in the journal Radiology.

Established as part of the Affordable Care Act (ACA), MSSP is intended to improve the quality of care for Medicare Fee-For-Service beneficiaries while reducing unnecessary costs. The program affords eligible providers, hospitals and suppliers an opportunity to create or participate in Accountable Care Organizations (ACOs)—groups of doctors, hospitals and other health care providers who work together voluntarily to provide care to their Medicare patients. MSSP represents the largest value-based population reimbursement program in U.S. history.

"The ACA encourages experimentation with alternative-payment models like value-based programs," said study lead author Anand Narayan, M.D., Ph.D., from Johns Hopkins Hospital in Baltimore. "In the value-based model, instead of being paid for doing more tests and procedures, providers get fixed payments tied to measures of whether they doing a good job or not."

While these measures are still coming into focus across medicine, mammography is uniquely situated to measure quality with a robust array of measures tracking outcomes of screening studies.

"Pay-for-performance incentives in ACOs can facilitate collaboration amongst various stakeholders across the healthcare continuum to improve mammography screening utilization and other key population health metrics, results which will become increasingly relevant as imaging reimbursements transition from fee-for-service to alternative or value-based payment," Dr. Narayan said.

This transition is well underway, Dr. Narayan noted, with the Centers for Medicare and Medicaid Services publicly announcing its intention to deliver the majority of fee-for-service Medicare payments through value-based programs by 2018. He said that the looming deadline makes it imperative that radiologists work actively with other stakeholders to determine and develop effective strategies for improving population-based health.

"In radiology, we can take an active role in working with other clinicians to ensure that people get appropriate preventive health services," Dr. Narayan said. "For instance, if a 50-year-old woman comes in for a screening mammogram, we could check to see if she is following screening recommendations for colorectal cancer, cervical cancer and other conditions."

Further study is needed to determine the specific tactics that the most successful ACOs used to achieve improvements in screening, according to Dr. Narayan.

"While we weren't able to look at specific practices to see what these organizations did, a wide variety of strategies have been discussed," he said. "Many strategies revolve around communications, such as phone calls, letters, group health education sessions, peer counseling and home visits."

Since the ACA began its rollout in 2010, the number of Americans with health insurance has increased, a trend that may further drive mammography utilization. Previous research showed statistically significant improvements in mammography screening after the state of Massachusetts enacted healthcare reform in 2006.

"Screening mammography is associated with having access to the health care system," Dr. Narayan noted. "Women start getting screening mammograms and a wide variety of other preventive health services when they start seeing primary care doctors." 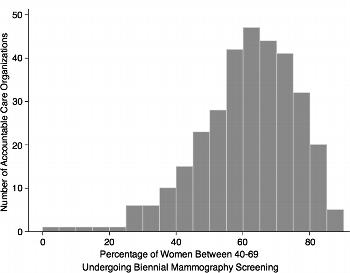 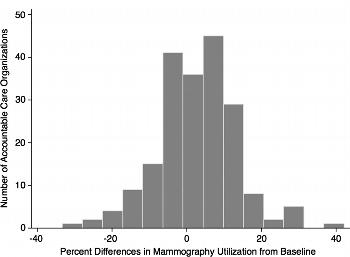