OAK BROOK, Ill. — FA single oral dose of methylene blue results in an increased MRI-based response in brain areas that control short-term memory and attention, according to a new study published online in the journal Radiology.

Methylene blue is used to treat methemoglobinemia, a blood disorder in which oxygen is unable to release effectively to body tissues, and as a surgical stain.

Animal studies have shown a single low dose of methylene blue enhances long-term contextual memory—the conscious recall of the source and circumstances of a specific memory—and extinction memory, a process in which a conditioned response from stimuli gradually diminishes over time.

"Although the memory-enhancing effects of methylene blue were shown in rodents in the 1970s, the underlying neuronal changes in the brain responsible for memory improvement and the effects of methylene blue on short-term memory and sustained-attention tasks have not been investigated," said study author Timothy Q. Duong, Ph.D., from the University of Texas Health Science Center at San Antonio, Texas. "Our team decided to conduct the first multi-modal MRI study of methylene blue in humans."

Twenty-six healthy participants, between the ages of 22 and 62, were enrolled in a double-blinded, randomized, placebo-controlled clinical trial to measure the effects of methylene blue on the human brain during working-memory and sustained-attention tasks. This study was approved by the local ethical committee.

The participants underwent functional MRI (fMRI) before and one hour after low-dose methylene blue or placebo administration to evaluate the potential effects of methylene blue on cerebrovascular reactivity during tasks. Mean cerebral blood flow was measured pre- and post-intervention.

The results showed methylene blue increased response in the bilateral insular cortex—an area deep within the brain associated with emotional responses—during a task that measured reaction time to a visual stimulus. The fMRI results also showed an increased response during short-term memory tasks involving the brain's prefrontal cortex, which controls processing of memories, the parietal lobe, primarily associated with the processing of sensory information, and the occipital cortex, the visual processing center of the brain. In addition, methylene blue was associated with a 7 percent increase in correct responses during memory retrieval.

"This work certainly provides a foundation for future trials of methylene blue in healthy aging, cognitive impairment, dementia and other conditions that might benefit from drug-induced memory enhancement," Dr. Duong said. 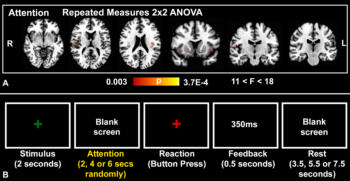 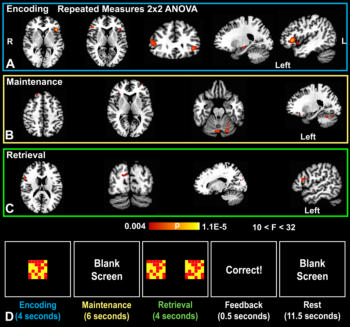 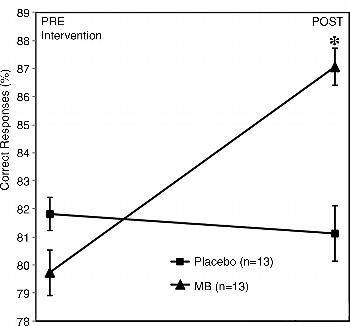 Figure 4. Analysis of delayed match-to-sample task performance change (after intervention to before intervention) during the retrieval phase shows a significant increase in correct responses only in the methylene blue (MB) group (P = .01). Error bars = standard error of mean.